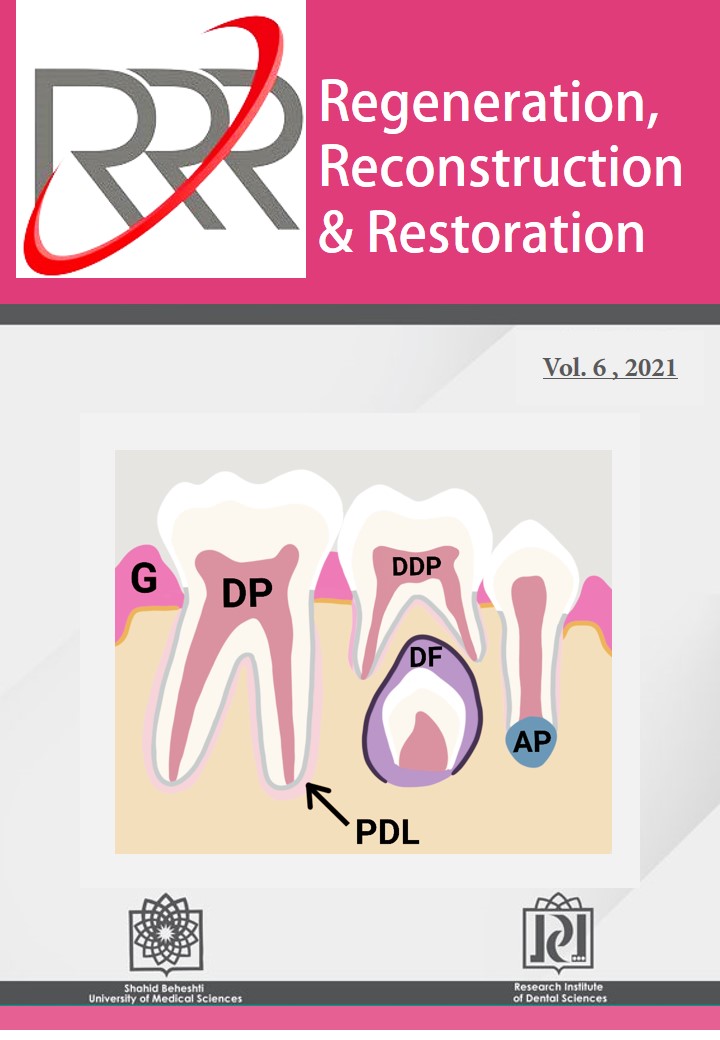 Introduction: During the last decades, there has been an increasing interest in the relationship between diabetes mellitus (DM) and periodontitis. Some evidence has suggested that inflammatory factors like C-reactive protein (CRP) can be contributing factors to both periodontitis and diabetes. This study was aimed at assessing periodontal position in diabetes mellitus type 2 patients based on HbA1c and CRP.

Results: In this study, 24 women and 11 men by mean age of 55/31±8/37 were in a good diabetic patients’ group (HbA1c<7%) and 30 females and 11 males by the mean age of 53/76±9/91 were in poor control diabetic patients (HbA1c≥7%). A significant correlation between the elevation of CRP and increased level of HbA1c was observed (P<0/001). The patients` age was associated with the duration of diabetes (P=0/024) and women had significantly more duration of diabetes than men (P=0/012). Regarding PD, CAL, BOP and PI, there was no significant difference between the analyzed groups. Also, no significant relationship between CRP and periodontal parameters has been found.

Conclusion: CRP was found as a predictor of HbA1c in patients with poor glycemic control. This implies higher infection rates due to diabetes.

The tooth bud comprises of aggregation of cells demarcated as enamel organ, dental papilla, and dental follicle. They produce different parts of tooth and its supporting structures. More attention is paid to the teeth and its related structures as sources of mesenchymal stem cells (MSCs). Using dental sources has many advantages, such as easy access and less ethical consideration. MSCs from these tissues, besides In vitro achievements, showed effective results in clinical applications, especially in oral and maxillofacial regeneration.  The case selection and how to harvest the tissue from teeth structures are rarely described. In this concise review, the criteria of subject and teeth selection as a source of MSC isolation were assessed and how to harvest the considered tissue was also discussed.

Introduction: Spinal cord injuries are one of the main causes of disability with devastating neurological consequences and secondary conflicts in other organs. Tissue engineering and regenerative medicine have been recognized as novel, promising methods in the treatment of tissue injuries, especially in neurological damage in recent decades. Hydrogels have the advantage of compatibility with damaged tissue, and injectable hydrogels can be applied in minimally invasive surgeries. This study aimed to evaluate an injectable hydrogel-based scaffold consisting of thiolated chitosan and alginate for neural tissue regeneration.

Materials and Methods: In the present study, an injectable hydrogel-based containing thiolated chitosan and alginate was prepared. Microbiology and pH tests were performed. Microstructural properties and porosity of scaffold were evaluated by scanning electron microscope (SEM). The swelling /shrinkage ratio and rates of biodegradation were also conducted. Finally, the viability of L929 cells on the scaffold was assessed using 3-(4,5-dimethylthiazol-2-yl)-2,5-diphenyltetrazolium bromide (MTT) assay.

Results: Thiolated chitosan/ alginate hydrogel had low pH with no contamination. SEM showed hydrogel had a porous microstructure with a mean pore diameter of 21.89 ± 0.32 μm which is suitable for cell culture. Furthermore, according to MTT test results, this hydrogel was biocompatible.

Conclusion: Thiolated chitosan/ alginate hydrogel is convenient for application in neural tissue engineering based on its structural properties and its ability to support cell proliferation. According to the in vitro analysis, it can also be used as a scaffold to create a suitable environment for increasing cell viability.

Maxillary Sinusitis due to Dental Infection: A Case Series Study

Introduction: Odontogenic infection is one of the most common causes of maxillary sinusitis which can lead to severe complications like cerebral abscess and orbital cellulitis. This study aims to evaluate the frequency of acute and chronic maxillary sinusitis by odontogenic source in 120 patients.

Materials and Methods: One hundred and twenty patients (240 sinuses) were examined by clinical examinations and their sinuses were assessed for the extent of fluid or mucosal thickening in computed tomography (CT) images and water's views. A dental examination has been performed to detect dental involvement and priapical radiography has been obtained to confirm the findings. Combination treatments were performed on five patients with refractory odontogenic sinusitis. Chi-square analysis has been used to identify the correlation between the prevalence of odontogenic sinusitis, age, and gender.

Results: Sinus involvement caused by dental origin has been found in 11.2% of the cases. Periapical involvement of maxillary first molar has been the most common cause of sinusitis with dental source (68%). The incidence of chronic apical periodontitis has been significantly higher than the other periapical infections (75% versus 25%). The signs and symptoms of sinusitis in all five cases were eliminated after the combination treatment after four months.

Conclusions: Odontogenic sources especially chronic apical periodontitis may lead to inflammation of the maxillary sinus membrane which usually is ignored because of its silent progression.

Materials and Methods: In this historical cohort study, CBCT images of 40 patients i.e, 20 males and 20 females, older than 18 years of age were reviewed. CBCT images with 1-mm-thick sections and NNT Viewer software for image analysis were used to measure frontal sinus height. The mean width, depth, thickness of the anterior cortex of the frontal bone, and the number of septa were measured in the axial sections, and the height was measured in the coronal sections of the CBCT images in both sexes. The data were analyzed by Student's t-test.

Conclusion: The results of this study showed the higher height, width, depth, and number of septa in males than in females, but the difference in the number of the frontal sinuses and the thickness of the anterior cortex of the frontal sinus was not sufficient to accurately determine gender.

How to Find Abutment Screw Channel of a Cement-retained Implant Supported Restoration? A Literature Reviews

Conclusion: The techniques reviewed were categorized into 3 groups of marking techniques, customized guides, and imaging techniques with different outcomes.

Evaluation of Temporomandibular Disorders after Orthognathic Surgeries: A Literature Review

Materials and Methods: Data for this review was obtained from the articles published between 2010-2020 via PubMed, Google Scholar, Web of Sciences, and Scopus. The content keywords matched those used in PubMed and Mesh engines.

Results: Based on the inclusion and exclusion criteria, 27 articles were included. Most of the selected articles were retrospective reviews and performed on class II and class III patients. Ages ranged from 19- 47 years. Pain reduction was reported in 11 studies, while 8 studies reported a click reduction post orthognathic operation. In two studies, decreased joint noises were reported after theorthognathic operation, and seven articles reported a decrease in maximum mouth opening. Three studies reported a bilateral sagittal split osteotomy (BSSO) and in one study, reduced and improved symptoms were reported after Le Fort I + (BSSO) surgery.  One study exhibited that in retrognathic patients BSSO orthognathic surgery is less predictable in reducing TMD symptoms. Three articles showed that orthognathic patients with TMJ click have a high predictive value.

Materials and Methods: Six male rabbits were randomly divided into two experimental periods of 0 and 4 weeks. Under general anesthesia, the screws were randomly placed in the tibia bone on both sides of each animal. The pullout test was conducted using a Sentam test device. Data were statistically analyzed using ANOVA.

Results: The average insertion torque for non-self-tapping and self-tapping screws amounted to 4.2±1.7 and 4.8±1.4 Newton/centimeter, respectively (P-value >0.05). The calculated measures for the pullout test demonstrated a significant increase of secondary stability after 4 weeks in comparison to 0 week (P-value<0.001). However, the results among the two screws showed no statistically significant difference in each time point (P-value >0.05).

Conclusion: No significant differences were demonstrated among self-tapping or non-self-tapping maxillofacial screws.