Ovarian cancer is the most fatal gynecological cancer and the 8th most prevalent type of cancer in Iran. Chemotherapy regimen for the treatment of this type of cancer is mostly based on platinum agents and paclitaxel. The major problem during treatment with cisplatin is the appearance of acquired resistance in cancer cells in the first 6 months of therapy. Owing to inefficacy of second line regimens, it seems necessary to find out the molecular mechanisms of cisplatin resistance and find an efficient strategy against the resistant cancer cells. In this study, two ovarian cancer cell lines, A2780-sensitive and A2780CP (resistant to cisplatin) were evaluated. To acquire the protein expression profile, a culture of each line containing 1.5×107 cells was divided into the two groups of control and treatment cells. The treatment group cells were treated with cisplatin at pre-determined IC50 concentration for 6 hours. Then, the total proteins of 7×106 cells were extracted. The proteome of each group (20 μg) was used for subsequent separation of proteins by two-dimensional gel electrophoresis using 7 cm IPG strips. The results of protein pattern changes were analyzed by one-way ANOVA. At least 230 proteins were detected in each gel, from which, about 45 proteins were differentially expressed in each model of comparison. However, by considering the results of all models of analysis on the protein expression profile of two cell lines, three proteins were determined as the key players of resistance against cisplatin.

Mycosporine like amino acids (MAAs) are UV absorbing compounds which are produced by a variety of organisms such as algae and cyanobacteria, in order to protect themselves from harmful UV irradiation. Thus, they can potentially be used as sunscreens in pharmaceutical and cosmetic industry. Many abiotic factors are studied which induce the production of MAAs in algae and cyanobacteria. In this investigation, we have cultivated the green microalga Desmodesmus sp. under salt stress and studied the effect of high salinity on MAAs biosynthesis. MAAs was extracted and partially purified using HPLC method. One compound with similar properties to MAAs was detected from the biomass extract, having a maximum absorption at 320 nm. Accordingly, this genus of microalgae can produce MAA-like compound under this condition, whereas it was not capable to synthesize MAA in normal condition. In fact, salinity is a stressor which can lead to the induction of MAAs synthesis in this microalga. Moreover, this investigation supports that the production of MAAs in microalgae helps the organism to survive in harsh environments, such as high salinity conditions.

In this study fucoidanase produced by terrestrial Apsergillus flavus FS018 was purified and characterized. The pure fucoidanase enzyme was found to have an optimum activity of 20.8U/mL at 55 ºC and optimum activity of 17.2U/mL at pH 5.0. Furthermore, the fucoidanase retained 96% of its activity after 8 hours of incubation at 55 ºC. Metal ions such Mg2+ and Ca2+ ions were found to slightly enhance the activity of this enzyme while Na+, K+ had inhibitory effect on the activity. The enzyme was found to be active towards fucoidan consisting of α-1→4 and α-1→3 glycoside bonds in the main chains and also galactofucans group. Estimation of the kinetic parameters of the enzyme revealed that Km and Vmax to be 1.9 mM and 0.38 mg/min, respectively when fucoidan from Sargassum vulgare was used as substrate. SDS-PAGE analysis of the purified enzyme revealed that it’s a monomeric enzyme molecule with an estimated molecular weight of 70 kDa.

DapE is an enzyme which is highly essential in lysine biosynthetic pathway for the growth and survival of Mycobacterium tuberculosis (Mtb) and other bacterial species although absent in human host. However, the sequence identity of Mtb-DapE with other mycobacterium and bacterial species estimated between 93 to 75% and approximately 50%, respectively. DapE is a metallo-enzyme requires few of transition metals for activity and bacterial proliferation. The homology model based structural studies including published structures revealed an availability of zinc interacting conserved amino residues in Mtb-DapE. In this study, we purified full length recombinant Mtb-DapE as tag-free (Mtb-DapETagFree) protein from inclusion bodies using zinc-NTA column. The single step purified protein observed with 96-98% purity and high yield. The indirect ELISA had 40% sensitivity using Mtb-DapE as an antigen against bovine tuberculosis (bTB) serum samples. IFA analysis with clear fluorescent spots of Mtb native DapE antigen in (3+) human TB positive sputum samples and recombinant Mtb-DapE positive control against Mtb-DapE polyclonal antibody are highly encouraging. The ELISA and IFA results incite for the consideration of Mtb-DapE in future development of quick and ideal TB detection assay along with other mycobacterium antigens. The future advanced detailed structural and functional studies using this highly purified and tag-free Mtb-DapE may provide discovery of antitubercular drug(s) and promising inhibitory molecules. 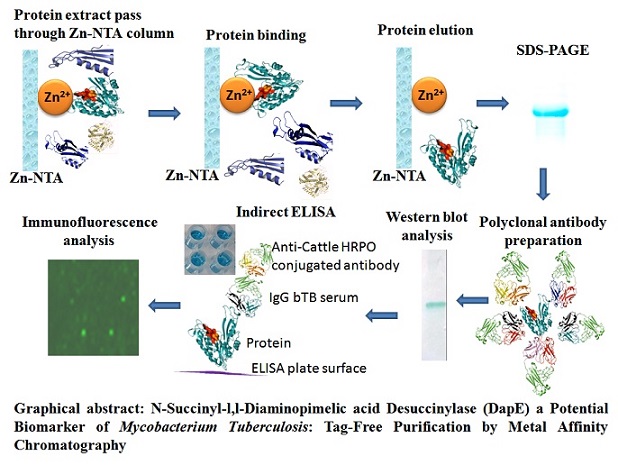