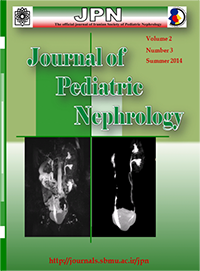 Acute Kidney Injury in Iranian Children -What Do We Know About It? - Part 2

Acute kidney injury (AKI) is reversible deterioration of renal function in which waste products accumulate and fluid imbalance occurs. The epidemiology of AKI has been changing over years. The aim of this study was to evaluate the epidemiology of AKI in hospitalized children in Iran. A literature search from March 2000 to March 2014 was conducted through MEDLINE, EMBASE, Scholar.google, IranMedex, MagIran, SID, and manual reference search of identified articles. Retrospective and prospective cross-sectional studies with a clear definition of acute kidney injury or failure were included. Seven out of twenty three articles which were found met the criteria. The incidence of AKI declined from 36% (2006-2008) to 15.4% (2010-2011) in the PICU setting of three referral teaching hospitals in Tehran. According to the classification, 10% had pre-renal failure, 86% had intrinsic renal failure, and 4% had post-obstructive uropathy. Follow-up was limited to the days of hospitalization. The overall reported mortality rate was 18% in pediatric departments. Acute glomerulonephritis including hemolytic uremic syndrome was the most common underlying disease (46.5%). Acute tubular necrosis was reported in 33% of the cases. One third of the cases of acute renal failure occurred in children less than two years. The real incidence of acute kidney injury might be higher considering a unified standard definition. Acute glomerulonephritis and acute tubular necrosis comprised the majority of the etiologies.

Introduction: Chronic Kidney Disease (CKD) is defined as renal injury and/or a glomerular filtration rate below 60mL/min/1.73m2 for more than 3 months. Neurologic symptoms in CKD include fatigue, poor concentration, headache, drowsiness, memory loss, seizures, and peripheral neuropathy. Obsessive-Compulsive Disorder (OCD) is a chronic disabling illness characterized by repetitive, ritualistic behaviors over which the patients have little or no control. Common obsessions include contamination and thoughts of harming loved ones or oneself. Washing and cleaning compulsions are common in children, as is checking. The purpose of this study was to investigate the relationship between OCD and CKD.

Materials and Methods: In this case-control study, we evaluated 186 children aged 6-17 years old who were visited in the pediatric clinics of Amir-Kabir Hospital, Arak, Iran. The control group consisted of 93 healthy children and the case group included 93 age and sex matched children with stage 1 to 3 CKD. Then, the children’s behavioral status was evaluated using the Children’s Yale-Brown Obsessive-Compulsive Scale (C-YBOCS). The C-YBOCS is helpful in identifying children with OCD. The data was analyzed using descriptive and analytical statistics in SPSS-16.

Conclusions: Compulsion is more common in CKD versus non-CKD children. The observed correlation between compulsion and CKD makes psychological counseling mandatory in children with CKD.

Introduction: Hyponatremia refers to the serum sodium levels less than 135 mEq/L, which can even lead to death. Accordingly, the present study compared the effects of intravenous fluid maintenance treatment with different concentration levels of sodium.

Materials and Methods: In an investigative study to evaluate children admitted to the Pediatric Intensive Care Unit (PICU) of Bahrami Children's Hospital (2012-2013) which required intravenous fluid therapy and aged one to 14 years were evaluated. They were randomly divided into two groups: fluid treatment with 50 mEq/L (group I) and 100 mEq/L (group II) sodium concentrations. The fluids were calculated according to Holliday-Segar formula. Sodium of plasma [P (Na)] and Urine specific gravity (USG) were measured at the time of admittance (first P (Na) and USG) and 24 hrs after treatment (second P (Na) and USG).

Results: 108 children were admitted into the study. Significant differences were noted in the second P (Na) levels and differing of first and second P (Na) (P<0.008 and P<0.011). In the first group, 14 cases and in second three cases were hyponatremia (P (Na) < 135 mmol/L), but they weren’t symptomatic during the study. The difference between first and second USG was greater in group I (P <0.023).

Conclusions: There was relation between the sodium of the IV fluid and decreased P (Na) concentration in the children who were undergoing intravenous (IV) fluid therapy. There were no Symptomatic hyponatremia cases reported, due to the decrease of P (Na), nor in the 24 hours following the IV therapy treatment.

Introduction: Vesicoureteral reflux refers to the retrograde flow of the urine from the bladder to the ureter and kidney. The ureteral attachment to the bladder is normally oblique, between the bladder mucosa and detrusor muscle, creating a flap-value mechanism that prevents reflux. Reflux occurs when the submucosal tunnel between the mucosa and detrusor muscle is short or absent. The inflammatory reaction caused by pyelonephritis can result in scarring, which is also termed reflux nephropathy. Since sacral bone anomalies have a direct influence on the final function of the urinary and bowel systems, this study was performed to investigate the relationship between sacral ratio and reflux nephropathy.

Materials and Methods: In this case–control study, the case -control group included 200 children under 9 years old who were referred to Amir-Kabir Hospital clinics with urinary tract infection and according to the VCUG and DMSA results, children with various grades of VUR entered the study. The sacral ratio was measured in the two groups and compared by a radiologist. The data were analyzed using Chi-2 and Mann Whitney Tests and software SPSS 16.

Is Urinary Tumor Necrosis Factor Alpha a Predictor of Urological Abnormality in Children?

Introduction: The role of urinary Tumor Necrosis Factor Alpha (TNF-α) in the diagnosis and treatment of different disorders has been evaluated recently. This study was conducted to evaluate the correlation of urinary TNF-α with urological abnormalities in pediatric pyelonephritis.

Materials and Methods: This prospective study was conducted on children with acute pyelonephritis. Urine samples were tested for TNF-α (ELISA colorimetric, SANQUINE, USA) and creatinine in study group. Renal ultrasonography and voiding cystoureterography were performed in all patients, as well.

Results: One hundred pyelonephritic patients were enrolled in the study. Urinary TNF-α/Cr was in an abnormal range in 91.9% of the patients. This query revealed a significant correlation between urinary TNF-alpha and kidney ultrasound results (r=0.59) and grading of reflux in voiding cystoureterography (r=0.128). Furthermore, our study showed a significant difference between the level of urinary TNF-α/Cr in patients with and without abnormality on kidney ultrasonography (p value < 0.000).

Conclusions: The results of this study indicate the efficacy of urinary TNF-α in detection of inflammatory disorders such as pyelonephritis and pediatric urological abnormalities.

We report a six-year-old female child who  presented with
continued incontinence and a normal physical examination.
Urodynamic study was normal and uroflowmetry showed a
prolonged low peak flow rate (PFR) in voiding. VCUG revealed
left grade ш VUR. Her symptom continued in spite of medical
treatment. Finally, MRU showed a single system ectopic ureter
with a dysplastic kidney on the right side and a refluxing duplex
kidney on the contralateral side. She underwent surgical
correction and recovered.