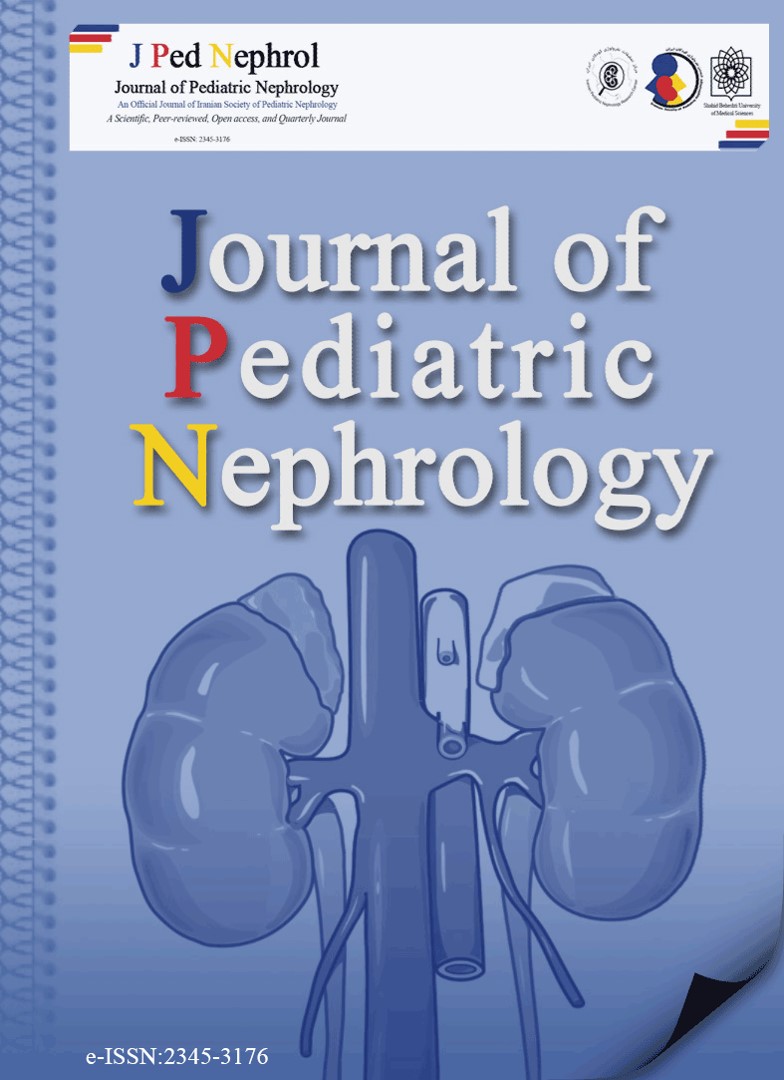 Different radiologic and radionuclide cystography studies have been suggested to
detect and follow up vesicoureteral reflux (VUR) in children, with conflicting results.
Conventional voiding cystourethrography seems the preferred method to evaluate
urinary tract abnormality, voiding dysfunction, and accurate grading of VUR. However,
radioisotopic cystography is a preferred method to evaluate VUR in women, patients
without voiding dysfunction, and re-evaluate VUR.

Renal Complications Due to SARS-CoV-2 Infection in Pediatric Population

Background and Aim: COVID-19 pandemic originated in Wuhan City, China, in 2019.
The disease spectrum ranges from asymptomatic to severe respiratory failure leading
to death. Although in a lower percentage, pediatric patients also have complications,
not only pulmonary but also systemic, affecting other organs. This article aims to study
the renal involvement of pediatric patients infected by the Severe Acute Respiratory
Syndrome Coronavirus 2 (SARS-CoV-2).
Methods: We designed a retrospective observational cohort study of patients
hospitalized in the emergency department and intensive care unit of a tertiary medical
facility hospital Infantil de México Federico Gomez in Mexico City, from March 1,
2020, to May 16, 2021. The inclusion criteria included patients younger than 18 years
who had a positive Reverse Transcription-Polymerase Chain Reaction (RT-PCR) test or
a positive rapid antigen test of nasopharyngeal sample for SARS-CoV-2 at admission.
Results: We included 165 patients, of whom 29(17.6%) patients developed renal
complications during hospitalization. In these patients, 12(41.3%) patients developed
proteinuria, 10(34.5%) developed any type of Acute Kidney Injury (AKI), i.e., Acute
Kidney Injury Network (AKIN-1) in 26.6%, AKIN-2 in 40% and AKIN-3 in 33.3%.
Also, 5(17.2%) patients had arterial hypertension, 2(6.9%) required renal replacement
therapy, 4(13.8%) had hematuria. Only 1(3.4%) patient had developed rapidly
progressive glomerulonephritis.
Conclusion: COVID-19 infection within its spectrum can cause kidney disease; the
most common complications are proteinuria and AKI. Older age and admission to the
intensive care unit are risk factors for kidney damage.

Background and Aim: Peritoneal dialysis is an effective modality of renal replacement
therapy in end-stage renal disease. The initial step in peritoneal dialysis management is
securing the Peritoneal Dialysis Catheter (PDC). This study aims to compare the infective and
mechanical complications of the surgical versus the percutaneous catheter insertion technique.
Methods: This retrospective analytical study was conducted on end-stage renal disease
patients who attended the Department of Nephrology, ESIC Medical College, and Super
Specialty Hospital. The study was conducted from January 2019 to June 2020. The records
of 25 patients who underwent percutaneous PDC and 5 patients who underwent open
surgical PDC technique were reviewed. The complications (mechanical and infective
complications) at 3-, 6-, and 12-month intervals among the study groups were considered
the primary outcome variables, and catheter and patient survival at 1-year interval were
considered the secondary outcome variables. The student t test and the Chi-square test
were used to compare the study groups. The data were analyzed via the coGuide software.
Results: No significant differences in baseline parameters were observed among the groups
(P>0.05). The infective complications, namely the peritonitis rate and the exit site infection
were reported more in the surgical technique of PDC placement compared to percutaneous
placement (20% vs 16% and 20% vs 0%, respectively); however, the difference was not
statistically significant. Catheter migration was higher in surgical technique compared to the
percutaneous technique (20% vs 4%) but it was not statistically significant.
Conclusion: Both the percutaneous and surgical techniques reported similar rates of
complications, technique survival, and patient survival. Further randomized control
trials or prospective cohort studies are needed to analyze the effectiveness and
complications of these techniques.

Etiology of Urolithiasis in Children

Background and Aim: Urinary stones are a common problem among children that causes
pain, dysuria, and other complications, including urinary tract obstruction and infection.
The prevalence of urinary stones in children has been increasing in recent decades.
Since the causes of urolithiasis in children differ in various geographical regions, with
diverse ethnic backgrounds and popular nutritional habits changing over time, we
designed this study to update the identifiable etiologies of urinary stones in children
younger than 14 years in Northwest Iran.
Methods: This cross-sectional study was conducted on 144 children with urinary stones
who were referred to Tabriz Children’s Hospital, Tabriz City, Iran, from March 2018
to September 2020. To determine the main causes of urolithiasis, such as metabolic
disorders, urinary tract infections, and anatomical abnormalities, several variables,
including age, sex, and results of ultrasound examination, urine analysis and biochemical
tests, urine culture, and blood gas analysis, were collected, analyzed, and interpreted.
Results: In this study, 90 boys and 54 girls with an average age of 11.75 (ranged:
1-160) months were included. The most common causes of urolithiasis were metabolic
or biochemical disorders in 67 cases (46.5%), mainly hypercalciuria followed by
hyperoxaluria, anatomical abnormalities in 10 children (7%), and urinary tract
infections in 3 patients (2.1%). Dehydration leading to excessive urine concentration
in 87 children (60.4%) was the most common condition associated with urolithiasis in
the studied children.
Conclusion: Regarding the high prevalence of metabolic disorders, especially
hypercalciuria in children with urolithiasis, these disorders should be considered for
preventive, diagnostic, and therapeutic measures.

Background and Aim: Urinary Tract Infection (UTI) is a common bacterial infection in

(APN) and lower UTI is vital due to the involvement of renal parenchyma in APN.

Protein (CRP) to predict APN in children with UTI in a tertiary care hospital.

Methods: This analytical cross-sectional study was conducted in a tertiary care hospital

were included in the study Sensitivity, specificity,

Under the Curve (AUC) than CRP for differentiating APN and lower UTI.

in children. However, the study showed that PCT is a better marker to differentiate APN

and lower UTI compare to CRP.

Background and Aim: Vesicoureteral Reflux (VUR) refers to the pathological return
of urine from the bladder to the ureter and then to the kidney in some patients. Vitamin D
deficiency is associated with some renal diseases. This study examines the relationship
between vitamin D deficiency and urinary reflux.
Methods: In this cross-sectional study, 200 children referred to Amir Kabir Hospital
in Arak, Iran, were divided into 2 groups of patients with VUR (n=100) and another
group of pediatric participants considered healthy and had no findings of VUR (n=100).
Confirmation of diagnosis was performed via voiding cystourethrogram. Serum vitamin
D levels were evaluated by the Enzyme-Linked Immunosorbent Assay (ELISA) method
in all participants.
Results: The results showed that the rate of vitamin D deficiency was 38% and 42%
in the case and control groups, respectively. Therefore, no significant correlation was
observed between the two study groups in terms of vitamin D deficiency. This finding
was regardless of VUR complications affecting vitamin D metabolism.
Conclusion: We assume that VUR is a complicated condition with several
complications, and the relationship of each complication with vitamin D deficiency has
been determined to some extent in previous studies; however, this condition cannot be
considered an independent factor leading to vitamin D deficiency.

Secondary hypertension is more common in children than adults, and renal disease is the
most common cause. Several studies have shown a relationship between abnormalities
in renal arterial vascularity and the onset of hypertension. We reported a case of
hypertension in a 10-year-old girl with elevated plasma renin and normal aldosterone
levels. Antihypertensive therapy was necessary to achieve blood pressure control, and
the final diagnosis of hypertension was obtained from Computed Tomography (CT)
angiography demonstrating unusual renal vascular abnormalities.

Examining a Neonatal Boy With an Imperforate Anus