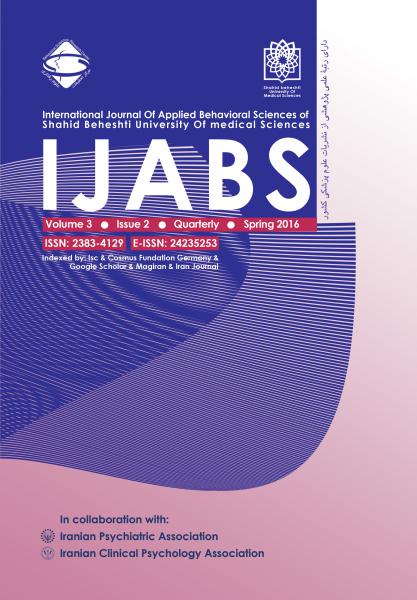 Background: the aim of this correlational study was to predict emotional intelligence according to executive functions and metacognitive awareness in junior high school female students.Method: the study sample consisted of 182 secondary school female students at District 2, Tehran, Iran, who were selected using multi-stage random sampling method. The Wisconsin Card Sorting Test (WCST), Schutte Self-Report Emotional Intelligence Test (SSEIT) and Metacognitions Questionnaire (MCQ) (2006) were used to collect data. In order to analyze the data, in addition to descriptive statistics methods, simultaneous multiple regression analysis was implemented using the SPSS statistical software.Results: the results showed that 39.9% of the variance in emotional intelligence can be accounted for based on linear combination of variables from executive functions, including number of classes, preservation error and other errors, and variables from metacognitive awareness, including planning/assessment and personal knowledge. These results could have numerous tacit applications in planning to prevent negative consequences of problems caused by weakness in executive functions and metacognitive awareness.

Introduction: The present research aims to study the mediation role of psychological inflexibility on the relationship between the schemas domains) and anxiety symptoms. Methods: In order to achieve the study objectives, a sample of 230 students has been selected, applying availability sampling. The applying tools included the short-form of Young questionnaire (YSQ-SF), the acceptance and action questionnaire-II (AAQ-II) and Beck Anxiety Inventory (BAI). Results: Correlation analysis has shown that there is a relationship between the early maladaptive schemas and anxiety symptoms. Furthermore, the path analysis shows a mediation role of psychological inflexibility between disconnection/rejection (2.37, p<0.01) impaired autonomy and performance (3.19, p<0.01), overvigilance/inhibition (2.90, p<0.01) and the anxiety symptoms. Conclusion: The most obvious finding to emerge from this study was that considering some techniques for decreasing psychological inflexibility enhances the outcome of schema therapy. This research managed to answer how the early maladaptive schemas have their effects on the anxiety symptoms in a students' sample. Further work needs to be done to study the relationship between the early maladaptive schemas and psychological inflexibility in the clinical samples. Declaration of Interest: None.

Introduction: The present study aimed at investigating the effectiveness of group quality of life therapy (GQOLT) on refractory disease patients’ subjective well-being.Methods: The design of the study was experimental with an experimental and a control group, including a pre-test, post-test and follow-up test. Statistical population consisted of patients suffering from MS referring to health centers in Shiraz from which 24 patients were selected using convenience sampling method. They were randomly assigned to experimental and control groups (each 12 members). The experimental groups received GQOLT during eight 90-minute weekly sessions. The control group received no treatment. All participants completed the Subjective Well-being Questionnaire as pre-test, post-test and follow-up test. The data were analyzed using analysis of covariance method.Results: All differences regarding to comparing of means of pretest, posttest and follow up phase were at the level of P<0/001 significant. The results of the post-test revealed that group quality of life therapies have positive and significant effects on improving subjective well-being of MS patients. In the follow-up test, these impacts proved to be long-term.Conclusions: This research shows that group quality of life therapy have improved subjective well-being of MS patients remarkably. Therefore, it is recommended that psychological interventions to be done for these patients.

Background and Purpose: Alexithymia that is known as a kind of insufficiency in emotion regulation is a dangerous factor for many mental disorders. This study is conducted to evaluate the effectiveness of emotion regulation intervention on coping styles in patients with the symptoms of alexithymia.Materials and methods: The research method is experimental with the pretest – post-test and control group. The study population has included the B.A students of Kharazmi University in the year 2014. The study sample has been consisted of 40 students who had the symptoms of alexithymia in the Kharazmi University in the year 2014; these students in the scale of alexithymia have been scored higher than 60 and during the interviews they have been approved in terms having the symptoms of alexithymia and the lack of accompanying symptoms. Then, by getting their permission, these people have been randomly assigned in two intervention and control groups (N =20). But with the primary reduction of the sample, the number of participants in each group has been reduced to 12 people. The intervention group has been trained in 8 sessions of emotion regulation intervention training that each session has been lasted for 90 minutes per week. But the control group did not receive any training programs. The research tools have been consisted of the Tehran Coping Styles Inventory of Karvar et al (1989) and Toronto alexithymia of Besharat (2007). After collecting the data, in addition to using the descriptive statistics, the covariance analysis has been used to analyze the data.Results: The data analysis has shown that the emotion regulation intervention will significantly increase the use of problem-focused coping style (p<0.05).  Conclusion: According to the results of this study, the emotion regulation intervention can be an effective method to improve the problems that are associated with alexithymia in the patients who have alexithymia, and it can be considered as a preventive intervention to prevent the bigger problems of the people who have alexithymia.

Introduction:  This research aimed to investigate the effectiveness of Acceptance and Commitment Therapy (ACT) on fear of intimacy and self-criticism in women working in welfare Institute of Kerman City. Method: It was a quasi-experimental study including a pre-test, post-test, and one-month follow-up with a control group. Among all the working women in this institute, 50 women were recruited via convenience sampling method and were randomly put in experimental and control group. The experimental group received eight sessions of ACT, while the control group received no intervention. Covariance analysis were used for analyzing the data using SPSS software. Results: Our results showed that the self-criticism and the fear of intimacy were reduced in the experimental group after eight sessions of ACT. This finding was still significant in the one-month follow up (P<0/05).Conclusion: The results showed that the ACT group training can be effective to modify the self-criticism and fear of intimacy.

There is an urgent need to develop appropriate instruments to measure student Interpersonal Emotion Regulation for the fields of research and practice. In this study, we sought to validate a brief measure to assess Interpersonal Emotion Regulation in students. The aim of research was validation of Persian (Farsi) translation of this inventory.Participants were 392 Persian speaking students from Ferdowsi University students by quota sampling. Participants completed interpersonal emotion regulation questionnaire, Kashdan emotional styles scale and stress, depression, anxiety and attachment styles of Collins. In order to determine the reliability of the questionnaire Cronbach’s alpha method was used, also confirmatory factor analysis method, content validity and construct validity were used to determine the validity of the questionnaire.The results indicate that there is positive and significant corelation between IERQ and secure attachment subscale. It means that students' predominant emotional styles are considered as adjustment and it is mostly used by people to control their emotion regulation. Alpha coefficient was 0.88 for internal consistency of IERQ. Also the results of confirmatory factor analysis indicated that the structure of the questionnaire is significantly fitted with data and all fitting indexes may confirm the model.It can be interfered from the results of the research that 20-item form of interpersonal emotion regulation questionnaire is sufficiently reliable and validated among Persian speaking students. So this questionnaire is a useful tool for determining inter-personal emotion regulation.

Background: Nowadays violence and aggression are one of the problems that have been seen in several levels and dimensions in the world. The present study investigated the effect of group choice theory and reality therapy training on the reduction of aggression among female students.Materials and Methods: The study employed a quasi-experimental method and a pretest- posttest with control group design. The population included all female high school students in academic year 2015-2016. Research instruments was Buss and Perry Aggression Questionnaire (BPAQ). 34 participants who achieve higher scores on BPAQ were randomly selected and assigned into one experimental and one control group (each group17 students). Experimental group received eight sessions of 1/2 hours training and control group receive no intervention till the end of the study. Data analyzed by using ANCOVA test.Results: Findings showed that group reality therapy training, significantly decreased aggression scores in experimental group (P<0.05).Conclusion: This study confirmed the effect of group choice theory and reality therapy on the reduction of aggression among high school aggressive female students.