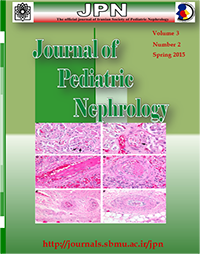 Transplant-associated thrombotic microangiopathy (TA-TMA) is considered one of the most severe complications after hematopoietic stem cell transplantation (HSCT). Transplant-associated thrombotic microangiopathy (TA-TMA) constitutes a form of microangiopathic haemolytic anemia and thrombocytopenia derived from a generalized endothelial dysfunction with intravascular platelet activation and formation of platelet-rich thrombi within the microcirculation. Since clinical features are common in several post hematopoietic stem cell transplantation (HSCT) complications such as capillary leak syndrome, engraftment syndrome, graft versus host disease (GVHD), diffuse alveolar hemorrhage and veno occlusive disease (VOD), an initial diagnosis of TA-TMA is not always certain, which is a principal reason for the failure of proposed treatments.

Eosinophilic Cystitis and Interstitial Cystitis: may allergy be the reason?

Allergic diseases have increased in prevalence during recent years. Although they impose numerous health and financial burden on patients and their family and also the society, they are to some extent preventable and manageable. While reviewing the literature to find any relationship between allergic disease as the familiar and preventable conditions and the two unfamiliar entities, named Eosinophilic Cystitis (EC) and Interstitial cystitis(IC); a significant number of reports were found about the etiological roll of atopy and allergy in the development of these conditions.  Nevertheless this relationship is stronger concerning IC than EC. Referring to allergy as a contributing factor makes it more understandable and controllable. Although in order to reach a proper conclusion more thorough studies are required.

Introduction: Urinary Tract Infections (UTIs) are common in childhood and are frequently associated with abnormalities of the urinary tract. UTIs are the leading cause of morbidity in patients with neurologic bladder; this causes recurrent UTIs and Chronic Kidney Injury& Disease (CKD) that affects their quality of life. Children with UTIs are mostly neurologically intact, but may have infections as a result of a voiding dysfunction. The present study aimed to examine the relationship between occult bladder dysfunction and recurrent UTIs in our patients.

Results: Of 210 Children 74% were female and 26% were male. 25% had one, 25% had two, 31% had 3, and 19% had more than 3 episodes of UTI. Eighty percent of the female and 56% of the male children had recurrent UTI (P: 0.004, odds ratio: 0.361). Fifty eight percent of the patients had Vesicoureteral Reflux which was bilateral in 34% of them. There was no correlation between UTI and Urinary Reflux (P=0.152, odds ratio=1.591) and also no correlation was detected between urodynamic findings and urinary reflux(P=0.243, odds ratio=1.485). Seventy six percent of the children with recurrent UTI had abnormal urodynamic results.

Opioid Poisoning in Children: A Report of 90 Cases

Introduction: The opioid overdose epidemic is a worrying and considerable public health problem in many countries. A few studies have been done in children about opioid poisoning. The aim of this study was to explain the clinical symptoms and laboratory findings of opioid poisoning and the associated complications among children.

Material and Methods: This prospective cross-sectional study was conducted on 100 children under 14 years of age who were poisoned with opium, tramadol, buprenorphine, methadone, and diphenoxylate and admitted to Loghman-Hakim Hospital, a major center for poisoning treatment in Tehran, Iran, from April 2011 to April 2012. The exclusion criteria were a history of musculoskeletal diseases, concurrent ingestion of other drugs, intramuscular injection, and a history of trauma. The clinical presentation and renal and electrolytes complications were recorded.

Results: Finally, 90 out of 100 admitted children were eligible to be included in the study, 64 boys and 26 girls (median age: 40.3 ± 32 months, range: 1 month to 11 years old). The minimum duration of admission was 1 day and the maximum was 29 days with a mean of 2 days. The major opioid substance was methadone. The most common symptom was decreased consciousness followed by bradypnea. The incidence of opioid- induced rhabdomyolysis was 2.2% but none of the them were complicated with acute renal failure or electrolyte disturbance.

Conclusions: Concerning this study, we recommend attention to muscle enzymes elevation and preventive spadework for its complications in children poisoned with opoiods.

Introduction: Anemia may be defined either quantitatively or physiologically. The diagnosis of anemia is determined by comparison of the patient's hemoglobin level with age-specific and sex-specific normal values. The easiest quantitative definition of anemia is any hemoglobin or hematocrit value that is 2 standard deviations (SDs) (95% confidence limits) below the mean for age and gender. The aim of this study was to evaluate the relationship between anemia and reflux nephropathy in patients with vesicoureteral reflux.

Material and Methods: This case-control study involved 260 children aged from 6 months to 2 years. They were divided into two groups of 130 children: the case group suffering from VUR with reflux nephropathy and the control group affected with VUR without reflux nephropathy .

Results: Results of our study showed that the prevalence of anemia in the Reflux Nephropathy group was not considerably different than that of the control group.

Conclusions: We concluded that there isn’t a direct correlation between anemia and reflux nephropathy in patients with vesicoureteral reflux.

Prevalence of Nocturnal Enuresis in School-age Children in Rafsanjan

Introduction: Nocturnal enuresis is an important developmental problem for school age children and it can cause emotional and social problems for children and their families. This study was aimed to determine the prevalence of enuresis in school children aged 6-8 years in Rafsanjan, Iran, during 2014.

Material and Methods: In this cross-sectional study, 1080 school children aged 6-8 were selected using a random cluster sampling method. Questionnaires were distributed among the children to be answered by their parents.

Conclusions: The results showed that the prevalence of nocturnal enuresis in our study is average. Since a minority of families seek medical advice and treatment for their children, family education and awareness is essential in this regard.

A Case of Refractory Systemic Lupus Erythematosus with Acute Psychosis

A case of refractory systemic lupus erythematosus was admitted with repeated tonic colonic seizures, intractable vomiting, diarrhea, and headache. Neurologic examinations, lumbar puncture analysis, and electroencephalogram were normal but magnetic resonance imaging of the brain showed dilated ventricles and sulci. Despite standard induction therapy, the patient gradually entered a confusional state, disorientation that changed to abnormalities in verbal and working memory, and finally no verbal communication for several days and avoided eating food and taking oral drugs. The patient achieved partial remission of the disease (improved symptoms of psychosis and renal function despite a high titter of anti-double strand DNA and positive anti-nuclear antibodies) with plasmapheresis, intravenous immunoglobulin, and anti-psychotic medication. Our case is interesting because he was refractory not only to standard treatments, but also he did not respond to therapeutic options that are used in refractory systemic lupus erythematosus and presented with psychosis that is an unusual clinical presentation in SLE .

Renal amyloidosis is a late manifestation of chronic juvenile rheumatoid arthritis (JRA) and usually manifests during the first 10 to 15 years after the onset of JRA. We hereby report a boy with JRA-related renal amyloidosis who presented with nephrotic syndrome in early childhood. Amyloidosis was associated with a 6-year history of juvenile rheumatic arthritis (JRA). Diagnosis of renal amyloidosis was confirmed by the deposition of Congo red positive amyloid fibrils within the glomeruli. Polarized light microscopy showed the classic green birefringence appearance.