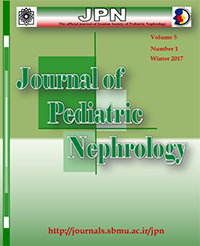 Fungal infections especially invasive ones (IFI), now are among well known and hard to manage problems in various kidney diseases in children. Various databases including pubmed, scopus, ovid and Web of Science Core Collection were looked for keywords including antifungals, fungal infections, kidney diseases Since 1990 to 2017. Renal side effects were looked using the site WWW.DRUG.COM as well. For common cases with Identified Pathogens Infectious diseases society of America (IDSA) recommendations for antifungal therapy as the most acceptable plan has been summarized at the end of article; specific therapeutic issues have been also discussed in their sections.

Etiology and Outcomes of Acute Kidney Injury: A Comprehensive Study in Four Tertiary Centers of Dhaka

Introduction: This study was conducted to determine the etiology and outcomes of AKI in 4 tertiary centers of Dhaka, Bangladesh irrespective of RRT requirement and the hospital setting in which they were treated.

Materials and Methods: This retrospective study was carried out in 4 tertiary care centers (Bangabandhu Sheikh Mujib Medical University, National Institute of Kidney Disease and Urology, Dhaka Shishu Hospital, and Dhaka Medical College Hospital) and 3 NICUs (Bangabandhu Sheikh Mujib Medical University, Dhaka Shishu Hospital and Dhaka Medical College Hospital of Dhaka) from January 2013 to December 2014. For the purpose of this study, AKI was defined according to the pediatric RIFLE (risk, injury, failure, loss, and end stage) criteria. All children admitted to the Pediatric Nephrology Inpatient Department and NICU of these hospitals were enrolled in the study. Data were collected from the registry of the hospitals. Ethics approval was obtained from the Institutional Review Board.

Role of Zinc in patients with Nephrotic syndrome

Introduction:  Nephrotic syndrome(NS) is one of the most common cause of chronic

morbidity in developing countries. This study is aimed to assess the effect of zinc

patients with NS, both with the first episode and first relapse, age between

2-10 years were included. Among the 60 patients, 30 patients of NS getting zinc were in

group. Zinc status was assessed before and after giving zinc or placebo.

during relapse were low in both groups,14 days later it was increased but still low.

difference was not statistically significant. Infection had occurred 73.3% after zinc

supplementation as compared with 63.3% in placebo group.

Conclusion: When zinc was given in RDA for short duration doesn’t reduce relapse

Introduction: Renal transplantation offers the best chance of survival to children with End Stage Renal Disease (ESRD). Patient survival and growth are superior in children with a renal allograft compared to dialysis. The aim of the study was to evaluate the outcomes of pediatric transplants done at a tertiary care hospital in Kochi, India over the study period.

Materials and Methods: In this retrospective study, the data of children who underwent renal transplantation at Amrita Institute of Medical Sciences from 2002 to 2016 Kochi were analyzed.

Results: Thirty-four children underwent renal transplantation over a 14-year period. Thirty-three underwent live related transplant whereas one underwent deceased donor transplantation. The mean age and weight of the recipients at transplantation was 14.3 years and 35.7 kg, respectively. Fourteen children were boys and twenty were girls. Thirty-one patients underwent hemodialysis prior to transplant, 2 were taken up preemptively, and 1 patient was on continuous ambulatory peritoneal dialysis. There were 5 documented urinary tract infections. No surgical complications were noted in the immediate post-transplant period. There were 5 episodes of acute rejection (14.7%). Two cases experienced Delayed Graft Function and the patient survival rate was 100%.

Conclusions: Renal transplantation is a viable option to manage children with ESRD with satisfactory long term results and can be done in a developing nation’s set-up.

Prevalence of Microalbuminuria in Children with Asymptomatic Microscopic Hematuria

Materials and Methods: This cross-sectional study was done on 150 children aged 2-14 years with asymptomatic microscopic hematuria at Nephrology Clinic of Children’s Hospital Medical Center in 2013-2015. All patients had clinical and laboratory tests such as BUN, creatinine, electrolytes, urine albumin/ creatinine ratio, blood pressure, etc. The obtained data were recorded and analyzed with SPSS (ver. 18). All children with anatomical anomalies, hypertension, previous urinary tract surgery, or nephrolithiasis were excluded from the study.

Results: The overall prevalence of microalbuminuria was 14.5 % and there was a significant relationship between microalbuminuria and the presence of dysmorphic red blood cells on urine analysis (p-value<0.05). The incidence of RBC cast was 54% (82 patients). Two children had upper-normal levels of blood pressure for age and sex that were followed closely and received special diets and medications. Twenty-nine patients (18.6%) had a positive family history of asymptomatic microscopic hematuria and the father of one of them had IgA nephropathy with ESRD. In children with microalbuminuria that received drugs for 3-28 months (mean, 6.3 months), microalbuminuria decreased significantly.

Macrophage Activation Syndrome as the Initial Manifestation of Systemic Lupus Erythematosus in a 7-Year-Old Girl – A Case Report.

Macrophage activation syndrome (MAS) is a potentially fatal complication of several chronic rheumatic diseases. Although it occurs most commonly with systemic onset juvenile idiopathic arthritis (SoJIA), it may also occur in association with systemic lupus erythematosus (SLE), Kawasaki disease, and adult onset Still’s disease. It is usually triggered by infections or due to medication modification. Here we report a 7-year-old girl who presented simultaneously with features of MAS and SLE and responded with pulse methylprednisolone followed by oral prednisolone and pulse cyclophosphamide.