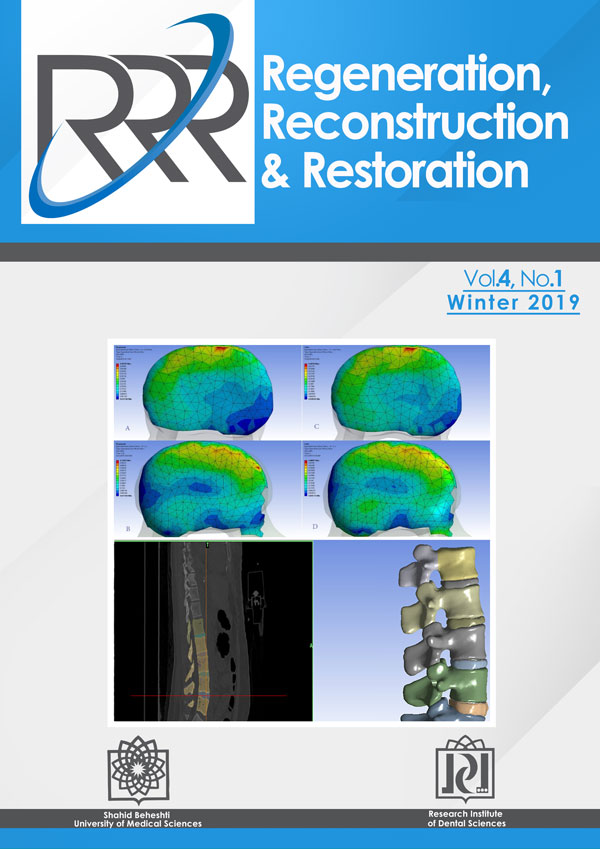 Root Surface Roughness after Treatment with Manual Curette and Er:YAG and Er,Cr:YSGG Lasers

Introduction: The Breast cancer is the second most common cancer in the women. Natural products extracted from medicinal plants can play an important role in cancer treatment. These compounds are probably effective in repairing damaged tissue in cancer. This study was designed to investigate antioxidant activity and cytotoxicity of ethanolic extract of alfalfa on breast cancer MCF7cell line.

Materials and Methods: For this purpose, the MCF7 cells line was cultivated and proliferated. Then, the cells exposed to different concentrations of alfalfa (25, 50, 100, 200, and 400 μg/ml) and were incubated for 24, 48, and 72 hours. After the incubation period, the colorimetric MTT method was used to determine cytotoxicity. Also, the total amount of phenol, flavonoid, anthocyanin, and carotenoid as well as the antioxidant activity of the extract were determined.

Results: The results showed that the different concentrations of ethanolic extract reduced significantly the growth of cells as compared to that of control (P˂0.05). The most pronounced growth inhibition recorded as 83.74% at the concentration of 400 μg/ml. The extract of alfalfa is a rich source of antioxidant compounds, as phenolics and carotenoid contents of extract were 32.63±0.17 mgGAE/g DW and 33.41±0.22 mg/g FW respectively. Also, its different concentrations affected scientifically on DPPH radical inhibition as the highest inhibitory effect (53.4%) was recorded at concentrations of 3.4 mg of extract.

Conclusion: These results suggest that the ethanolic extract of alfalfa have the most antioxidant activity and cytotoxicity against MCF7 cell line. It seems to come with further research, and utilizes its compound in cancer treatment.

Introduction: Pedicle screw-based spine fusion has been employed as a felicitous approach for treatment of degenerative lumbar spinal diseases.  Although the pedicle screw designs and fixation techniques have progressed, many clinical studies have reported the adjacent segment degeneration (ASD) and several other adverse effects after surgery. In the case of fixation techniques, the use of semi-rigid rods such as Polyarylether ether ketone (PEEK) rods can be an appropriate substitute for rigid fusion instrumentation. However, the biomechanical effects of using viscoelastic PEEK rods for use in clinical studies are still unclear.

Materials and Methods: In this study, the effects of using two pedicle screw-based stabilization systems, i.e. viscoelastic PEEK rods and elastic Titanium rods, on the stress distribution in L3-L4 intervertebral disc and the surrounding osseous tissue were investigated. An L1-L5 lumbar region was modeled. Subsequently, a mild degenerative disc disease was simulated in the L3-L4 lumbar level. Next, an axial cyclic torque was applied to the model.

Results: The results showed that, at the end of the loading cycle, the maximum von-Mises stress in the L3-L4 intervertebral disc as well as the overall value of stress in the surrounding osseous tissue were slightly greater in the viscoelastic model as compared to the elastic one. Nonetheless, the stress distribution contours and the location of maximum stress were different in the two models.

Conclusion: It can be postulated that the vulnerable areas of lumbar bone are different in two models.

Introduction: Non-syndromic cleft lip with or without cleft palate is a malformation that may occur sporadically or with familial aggregation. Its inheritance is complex and many studies have focused on the role of genetics in the etiology of NSCL/P. rs1546124 is one of the most investigated polymorphims of the CRISPLD2 gene. This study aimed to investigate the association between CRISPLD2 rs1546124 gene polymorphism and the incidence of NSCL/P in Iranian population.

Materials and Methods: In this case-control study, 81 case-parent trio cases have been included. All cases of congenital anomalies and major developmental problems were excluded to select only those with a NSCL/P. 5 ml of peripheral blood was taken from all subjects. PCR and electrophoresis were performed to demonstrate genotype status in each group. For evaluating the probability of transfer from parents to children transmission disequilibrium was performed.

Results: The highest frequency of genotype in all three is related to CG and the highest allele frequency is related to C allele. The results of transmission disequilibrium showed that the probability of transfer from parents to children is not significant (P=0.38) and the risk of allelic transmission from each parent (with OR near 1) is not significant.

Conclusion: This study did not find any association between CRISPLD2 and NSCL/P. Further studies with adequate sample size should be designed to investigate for possible polymorphisms in Iranian population.

Assessment of Anterior Loop of Inferior Alveolar Nerve: An Anatomical and Radiographic Study

Introduction: Many surgical procedures including dental implants and osseous genioplasty is performed in the inter foraminal region of mandible and the anterior loop of inferior alveolar nerve is located within the limits of this area. As a result of vast incompatibility between the results of anatomic and radiographic studies regarding the presence and extension of this loop, we decided to perform a study to compare the result of cadaveric dissection and radiographic evaluation of this landmark.

Materials and Methods: Anatomic and radiographic analysis were performed on 18 cadaveric hemi mandibles. Presence of mental loop was determined and the extent of anterior loop was measured both in direct anatomical dissection of cadaver hemi mandibles and in CBCT scans.

Results: 14 hemi mandibles (77%) had mental loop both in radiographic and anatomical evaluations. The mean length of mesial extension of mental loop was 2.43mm in cadaveric dissection and 2.37mm in CBCT evaluation. There was excellent reliability between the mean cadaveric measurement and CBCT scan measurement (α coefficient: 0.983).

Conclusion: In our study a high prevalence of mental loop was showed and despite the diversity in its length, in most cases the length was less than 3 mm. Moreover, CBCT proved to be an accurate and precise modality in detecting and measuring mental loop.

Case Report: We present a rare case of bilateral MPNST with an osteoma in the Mandible. Clinically, massive bilateral swelling in the mandibular angle with rapid growth for 9 months was seen.

Results: Histological evaluation showed the proliferation of malignant spindle cells arranged in a fascicular pattern with infiltrating margins. Immunohistochemical evaluation was positive for S100 protein and vimentin and negative for CD 68, Desmin, and CD31. Resection the soft tissue lesions with debulking osteoma did not show any recurrence in five years follow-up.

Conclusion: Surgical excision may be an essential treatment option to eradicate MPNST.