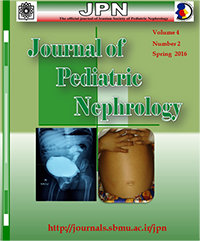 Idiopathic nephrotic syndrome is a heterogeneous disease with a spectrum of age at presentation, phenotype, renal pathology, and response to treatment. Many mutations are recognized to be implicated in sporadic or hereditary forms. The aim of this review was to summarize the results of the genetic studies which have already been carried out in Iran considering their limitations.

A literature search was conducted from March 1970 to September 2015 through MEDLINE, EMBASE, Google Scholar, Google, Iran Medex, Magiran, and SID. Eleven studies were relevant. Three articles were excluded due to insufficient data, duplicated case, and a syndromic nephrotic case without genetic studies. Our results showed that in the southwest of Iran, 80% of the patients had mutations in NPHS1 while in Fars Province, one third showed mutations in NPHS2 when all exons were assessed. In two different studies conducted in one center in Tehran, no mutation was detected in exon 5 but when all exons were studied, more than 65% had hot spot mutation in exon 8 of NPHS2. Interestingly, none of adolescents with FSGS showed mutation in p.R229Q (NPHS2, exon 5). This review revealed that both NPHS1 and NPHS2 were prevalent in Iranian children with SRNS. No mutation of p.R229Q was reported in Iranian adolescent with SRNS.

The Mean Platelet Volume in children with Pyelonephritis

Introduction: The mean platelet volume (MPV) is a determinant of inflammation. The aim of the present study was to investigate the MPV levels in children with pyelonephritis and to evaluate the possible relationship between MPV and febrile UTI.

Introduction: The clinical outcome of patients with Frequent Relapse Nephrotic Syndrome (FRNS) or Steroid Dependent Nephrotic Syndrome (SDNS) treated with cyclophosphamide or cyclosporine (CsA) is yet to be established. This study was carried out to compare the efficacy of CsA with cyclophosphamide in patients with FRNS or SDNS.

Materials and Methods: A total of 54 FRNS or SDNS children were randomly enrolled in this prospective study from August 2013 to July 2014. All the study subjects were treated with prednisolone 60 mg/m2 /day until the patients were in remission for three consecutive days. The patients were then randomly divided into two groups (Group-A & Group-B). Group-A was treated with cyclophosphamide at a dose of 2.5 mg/kg/day for 60 days, along with tapering dose prednisolone for 8 weeks. The Group-B study population was treated with cyclosporine at a dose of 3 mg/kg/day for 6 months or longer along with tapering dose of alternate day prednisolone for the initial 8 weeks. Four patients in Group-B and one patient in Group-A did not continue the treatment. So, we followed-up 49 children during this period.

Conclusions: This study showed that both drugs were effective in FRNS and SDNS.

Introduction: Methadone is a drug with biologic effects similar to morphine which acts via interacting with major classes of receptors  κand µ. It has a half-life of 25 to 50 hours. Ingestion of this substance causes serious symptoms such as bradycardia, apnea, decreased level of consciousness, and death. Rapid diagnosis and treatment is life-saving. The methadone urine test is an easy to perform test which could detect the substance rapidly. This study was conducted to determine the reliability of the positive methadone urine test in the first and second days of poisoning in children below the age of 13 who have been poisoned with it.

Materials and Methods: A total of 50 children below 13 years of age were enrolled in the study from April 2013 to April 2014. They were referred to Loghman Hakim Hospital with a history of incidental methadone ingestion and clinical symptoms congruent with methadone poisoning such as apnea, drowsiness, decreased level of consciousness, and bradycardia and miosis. Methadone urine strip test was performed on the first and second days. Five parameters (age, gender, dose of ingested methadone, urine SG, and urine pH) were tested and recorded for each patient.

Results: This test is an accruable test for the detection of methadone (P value<0.05). Findings suggested that as little as 2 mg of methadone administration could lead to a positive urine test. The highest frequency of positive test was observed when the test was given between 6 to 12 hours after methadone ingestion and the lowest frequency was obtained in the first 6 hours after poisoning. It is suggested that the test result can be false negative if it is carried out in less than 6 hours after methadone consumption.

Conclusions: According to the results of this study, the methadone urine drug screen test has high accuracy for detection of methadone in the urine. In addition, if the initial test result is negative in the first 24 hours, we recommend that the test should be repeated 24 hours after the ingestion; thus, two negative results in the first 48 hours of ingestion can rule out methadone poisoning by a probability of 98.5%.

We report a case with Wilson’s disease who developed nephrotic syndrome one year after starting D-pencillamine. After stopping D-penicillamine, only zinc was given for maintenance. His proteinuria resolved after four weeks of full dose prednisolone administration and three intravenous methylprednosolone injections for nephrotic syndrome. Membranous glomerulopathy is most commonly associated with nephrotic syndrome secondary to D penicillamine but isolated cases of minimal change lesions are also reported like our case.

The most likely cause of nephrotic syndrome in this child was the late complications of D-penicillamine. It also reemphasizes the importance of early monitoring for proteinuria and the need to shift to an alternative agent if side effects develop.

A Rare case of Aphallia

Aphallia (total absence of penis) is an extremely rare abnormality that can be part of the urorectal septum malformation sequence.

We are reporting a 40-day-old boy who was referred to our nephrology clinic due to the absence of the penis and urinating through the rectum. He was born to a 17-year-old mother and a 24-year-old father, and was delivered term via normal vaginal delivery.

The pregnancy was uncomplicated with no maternal toxin or medication exposure. Both parents were healthy and there was no family history of congenital abnormality. The parents were also unrelated.

Physical examination revealed agenesis of the penis, a normal scrotum, and bilateral normally positioned testises. Moreover, the heart, lungs, abdomen, head and neck, and spinal column were all normal on examination. The karyotype was 46XY and the gender was male. Initial ultrasonography one week after birth revealed moderate bilateral hydronephrosis but the last ultrasonography 45 days later revealed only mild fullness of both kidneys.