This Journal is indexed in 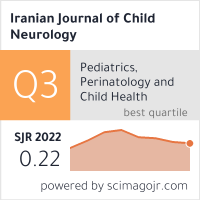 This Journal is Indexed in:

Also journal is available in:

With the outbreak of the novel pandemic coronavirus disease 2019 (COVID-19) worldwide, many pediatric rehabilitation clinics have closed to support social &physical distancing and therapist like other people are staying in their homes. There is common concern of parents and caregivers that how and with which quality children's rehabilitation exercises should be proceed. Most children with neurological diseases have problems such as muscle spasticity, range of motion limitation, muscle shortening, balance loss, mobility and movement impairment. The aim of this research was to summarize the necessaries of home based rehabilitation exercises program during quarantine period.

Objective: Subependymal Giant Cell Astrocytomas (SEGAs) are slow-growing glioneuronal tumors typically found around the ventricles of the brain, particularly near the foramen of Monro in 15%-20% of patients with tuberous sclerosis complex (TSC). Surgical resection is the standard treatment for these symptomatic tumors. The mTOR inhibitor everolimus can be regarded as an alternative treatment of SEGAs due to the complications of surgery.

Materials & Methods: This pre- and post-treatment clinical trial was performed on 14 children (eight females and six males with a mean age of 10 years) previously diagnosed with TSC based on the diagnostic criteria. The subjects received oral everolimus at a dose of 3 mg/m2 for at least six months. The present study primarily aimed to specify the effect of this medication on SEGA volume change before and after treatment. Secondary objectives were to determine the effect of this drug on renal angiomyolipoma (AML), skin lesions, and seizures in TSC patients.

Objective: Guillain-Barre Syndrome (GBS) is an acute inflammatory polyneuropathy characterized by a rapid progressive symmetric weakness. This is the most common cause of Acute Flaccid Paralysis (AFP) in most parts of the world. This study was carried out to investigate the epidemiological features of GBS in Iranian children.

Materials & Methods: Data were extracted using the AFP surveillance system: a National screening program to detect all cases of AFP aged 0-15 years, around the country. National Population Statistics data and AFP demographic data during 2008-2013 intervals was obtained from the relevant authorities in ministry of health. GBS cases were then extracted from this data base. Chi-square and Fisher's exact test were used for statistical analysis.

Results: 1884 cases of GBS were identified in years of study and average annual incidence rate was 1.72 per 100,000 populations. The highest incidence rate was in the range of 0-5 years. There was no statistically significant relation between the incidence of GBS and the season in the whole country.

Conclusion: High costs of GBS treatment, morbidity and occasional mortality and the number of new cases which is estimated to be about 300 people per year, need particular attention of health system.

Cytomegalovirus infection and Guillain-Barré syndrome: A first case-control study in children in Iran

Objective: Guillain-Barré syndrome (GBS) is an immune-mediated disease of the peripheral nervous system which affects all age groups through the world. Although the pathogenesis and optimal treatment of GBS are still not completely established, one of the most common infectious diseases to trigger the syndrome is cytomegalovirus (CMV) infection. GBS following CMV infections is rarely reported in childhood and there is no data on GBS with antecedent CMV infection in children in Iran. The aim of this study was to evaluate the association of CMV infection and GBS in children in Iran.

Conclusion: These data demonstrated the presence of anti-CMV antibodies in a majority of both patients with GBS and controls and no relation between CMV infection and GBS was observed. However, further studies with larges sample sizes are highly recommended.

Objectives: The Quiet eye training (QET) with the latest techniques as an uncomplicated approach has recently entered the field of research, has drawn the researchers’ attention. Therefore, the objective of this study was to examine the effects of quiet eye training on the perform in-phase and anti-phase patterns of bimanual coordination in children with DCD.

Materials & Methods: Participants (n=20; aged 8-9 years) were randomly divided into two groups including traditional training (TT) and QET. The participants performed bimanual in-phase and anti-phase movements with their wrists at three levels of speed ranging from slow to fast.

Discussion: Results indicated that the performance of the in-phase and anti-phase coordination mode was strongly influenced by the QET, and we conclude that a successful performance of a bimanual linear task dependents mainly on the availability of visual feedback.

The Effect of Family Empowerment Model on Quality of Life in Children with Epilepsy in South of Iran, 2018: A Randomized Controlled Clinical Trial

Objectives:Epilepsy is a chronic disease of the nervous system that significantly affects the performance and behavior of children. Epileptic children are at greater risk of cognitive and behavioral disorders than healthy children. Various factors associated with this disease affect the patients’ family.

Materials & Methods:The present study is a randomized controlled clinical trial conducted to evaluate the effect of family empowerment on quality of life of epileptic children referred to the desired centers (Bessat Clinic affiliated to Kerman University of Medical Sciences and Imam Reza Clinic of Shiraz) in two experimental and control groups. 80 parents of these children were selected and studied, if they met the inclusion criteria of study. In this study, Quality of Life in Childhood Epilepsy Questionnaire (QOLCE) was used. It is completed by parents of these children.

Results:The age of the studied children was 4 to 8 yrs. According to these results, there was a statistically significant difference between the two groups in the level of changes in all dimensions, so that the mean score of quality of life in different factors increased in the experimental group compared to the control group (P <0.05 in all dimensions).

Conclusion:Implementing the family-centered care plan by care providers, based on patient-family support relationships, identifying their strengths and weaknesses, prioritizing the services provided, and an effective interaction with the health team increase the family and staff satisfaction, reduce the costs, and improve the outcome of the disease.

Evaluation of the Levetiracetam treatment on reduction of epileptic discharges in electroencephalogram in children with epilepsy.

Objectives: Epilepsy is a relatively common disease in childhood. In some patients, despite clinical control of seizures, the electroencephalogram (EEG) is clearly abnormal. In some studies, the adverse effects of epileptic discharges on cognition, learning, behavior, and seizure recurrence in children have been identified. In this study, the effect of Levetiracetam on epileptic discharges in the interictal phase of EEG in children with epilepsy was investigated.

Materials and Methods: In this clinical trial, 59 children aged 2 to 15 years with epilepsy, whose clinical seizures were controlled by sodium valproate in the last six months, but they still had epileptic discharges in the EEG, were randomly divided into two groups. Intervention group (24 people), whom Levetiracetam was added to sodium valproate, and control group, whom treatment with sodium valproate (35 people) alone was continued, then the patients were followed for one year.

Risk Factors of Intractable Epilepsy in Children with Cerebral Palsy.

Objectives: We aimed to determine the risk factors predicting the development of intractable epilepsy in children with cerebral palsy taking into consideration perinatal characteristics; seizure semiology, imaging, and EEG findings.

Materials & Methods: This descriptive, retrospective, case-control study was conducted on 106 children with CP and epilepsy in the period from 2015-2020. They were 46 children with CP and intractable epilepsy and 60 children with CP and controlled epilepsy. Data were retrieved through medical files review. We collected and analyzed data related to demographics, clinical characteristics, perinatal history, etiology of seizure and CP, seizure semiology, intellectual functions, therapeutic options, brain imaging, and EEG findings.

Results: We established a model of the most important risk factors that are predictive of intractable epilepsy in children with CP. This predictive model includes the additive effect of a poor Apgar score at 5 minutes, the presence of neonatal seizures, focal epilepsy, and focal slowing on the EEG background (Area under the receiver operating characteristic of 0.810).

conclusion: Our results are helpful to identify intractable epilepsy in children with cerebral palsy with further support by offering early therapeutic interventions to reduce the burden of refractory seizures in children with CP.

MCADD(Medium-chain acyl-coenzyme A dehydrogenase deficiency) is an autosomal recessive disorder of fatty acid β-oxidation with prevalence of 1/1000 EU(Europian) countries and some more prevalence  in the middle east and Arabian countries with close relative marriage and Iran included. MCADD is the most common inborn error of metabolism fatty acid β-oxidation in Caucasian gender.Herein we report a 7-year old boy presenting with afebrile serial seizures followed by loss of consciousness and death. The patient was diagnosed with MCADD by metabolic screening test using mass spectrometry.

Brivaracetam in treating epileptic encephalopathy and refractory focal epilepsies in patients under 14 years of age.

Objectives: To analyze the efficacy and safety of Brivaracetam in pediatric patients with epileptic encephalopathy or unresponsive focal epilepsy.

Materials & Methods: This retrospective study was performed on 8 pediatric patients with EE or unresponsive focal epilepsy. Inclusion criteria: (1) 14 years or younger, (2) history of refractory epilepsy, (3) at least 1 month of continuous therapy with BRV, and (4) at least 6 months of follow-up. Exclusion criteria: (1) variation of concomitant antiepileptic drugs during the previous and/or subsequent 4 weeks of the introduction of BRV, (2) levetiracetam in therapy, (3) an epilepsy secondary to a progressive cerebral disease, tumor, or any other progressive neurodegenerative diseases, and (4) a status epilepticus in the month before screening or during the baseline period. The efficacy of BRV was defined as ≥50% of seizure frequency reduction at the end of the follow-up compared to baseline.

Results: All patients showed ≥50% seizure frequency reduction, of which 37.5% were seizure-free, 25% had a frequency reduction of ≥75% and 37.5% ≥ 50%. All patients with an epilepsy onset >12 months and duration of the epilepsy ≤6 years were seizure-free. The maximum effect was achieved at 2 mg/kg/day. Focal seizures showed a better response than epileptic encephalopathy. A remarkably positive effect of the Brivaracetam in patients with encephalopathy related to status epilepticus during sleep was noted. No relevant adverse events were noted.

Conclusion: Brivaracetam was an effective and well-tolerated treatment in pediatric patients with epileptic encephalopathy or unresponsive focal epilepsy, especially when the epilepsy onset was >12 months and the epilepsy duration ≤6 years. The overall effect was not dose dependent. Brivaracetam could have an indication in encephalopathy related to status epilepticus during sleep.

Acute cerebellar ataxia as the first manifestation of Imerslund-Gräsbeck syndrome

Imerslund-Grasbeck syndrome is a rare condition caused by Vitamin B12 deficiency and proteinuria. In this article, we reported a 10-year-old girl with imbalance and urinary incontinence. This case had cerebellar ataxia as the first manifestation. The disequilibrium had been progressed gradually wihin 3 weeks and was consistent with the symptoms of cerebellar involvement and urinary incontinence. Brain and cervicothoraco lumbar MRI was normal. In labratoary examinations, in addition to macrocytic anemia the patient had elevated lactate dehydrogenase (4775) so the possibility of malignancy raised, therefore bone marrow aspiration performed, In bone marrow examination hypercellular marrow with megaloblastic changes observed. This data proved megaloblastic anemia. Investigation of serum levels of vitamin B12 showed it was lower than normal range and the patient had significant proteinuria with normal nephrologic investigations. gasterointestinal tract study showed no evidence of serious problem and metabolic studies were normal . Finally, based on datas, Imerslund-Gräsbeck syndrome was recognized. Patient treated  by Vitamin B-12 Injection and it  led to improvement of balance, so that, after a month, He was able to walk and the cerebellar symptoms were greatly gone however proteinuria persists.

Giant Mediastinal Mass in A 3-year-old Boy, A Rare Presentation of Neurofibromatosis Type I

Neurofibromatosis type 1 (NF1) is an autosomal dominant disease diagnosed with presentation of café-au-lait macules, Skinfold freckling, iris Lisch nodules, neurofibromas, osseous lesion and Optic gliomas. Mediastinal mass as first presentation of NF1 is very rare and its frequency is about 2.7%. here we present a rare case of NF1 in a 3-year-old boy admitted with respiratory distress and superior vena cava syndrome.