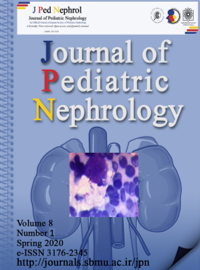 A Review of Antineoplastic Agents Associated Nephrotoxicity, an Understood Complication

In the recent decades, the survival of children with cancer has improved dramatically. This improvement is due to use of different chemotherapeutic agents, but the majority of these drugs have kidney toxicities. Deterioration of renal function due to antineoplastic agents is the main limiting factor for administration of these drugs. Chemotherapeutic agents could result in an acute or chronic injury in glomeruli or tubules. Overall childhood cancer survivors have a nine-fold higher risk of developing kidney function impairment when compared with their sibling. In this review, the nephrotoxicity due to some chemotherapeutic drugs such as platinum agents, ifosfamide, methotrexate(MTX), doxorubicin, gemcitabine and imatinib have been discussed.

Efficacy of Vibroacoustic Stimulation Treatment of Enuresis in Children

Methods: Seventy-eight children were included in this prospective study. Dysfunctional voiding score (DVS) and nocturnal enuresis (NE) score were measured before and after vibroacoustic treatment. The success of vibroacoustic therapy use was evaluated according to the percentage of decrease in DVS and NE scores relative to the pre-treatment values. Descriptive and analytic statistical methods were applied for data analysis using SPSS software version 22.0.

Conclusion: The results of the present study showed the positive effect of the vibroacoustic therapy in school-aged children with functional voiding disorders. It is, however, necessary to conduct further prospective studies in order to confirm its effectiveness and determine its long-term results.

Background and Aim: Idiopathic nephrotic syndrome (INS) is a disease of relapse and remission in children in which about 20-30% of the patients may experience a single episode in their lives while the rest suffer from relapse. Some factors contribute to relapse. The objective of this study was to explore the predictors of relapse in INS.

Methods: A prospective longitudinal study was conducted in the Department of Pediatric Nephrology, Bangabandhu Sheikh Mujib Medical University (BSMMU) from September 2015 to August 2016. One hundred and ten patients with the first episode of INS were uninterruptedly enrolled in this study. After screening and subsequent confirmatory diagnosis, the patients were treated with a single morning dose of oral prednisolone 60 mg/m2/day for 6 weeks followed by oral prednisolone 40 mg/m2 every alternate day for the subsequent 6 weeks. The total number of relapses within six months after the initial episode was collected in a data collection sheet. Every relapse was correlated with age of onset, sex, initial serum albumin level, fasting serum cholesterol level, and time to response in the initial attack. The association between relapse and its potential risk factors was investigated using logistic regression analysis.

Conclusion: The study found that the first episode INS had a higher risk of relapse in boys with respiratory tract infection and in patients who needed more than two weeks of prednisolone treatment to achieve remission.

Background and Aim: Urinary tract infection (UTI) can lead to adverse renal outcomes in the form of renal scarring and its consequences in children. Underlying congenital abnormalities of the kidney and urinary tract (CAKUT) play a crucial role in UTI recurrence and its outcome.

Methods: This study was conducted to evaluate children aged 1 month to 18 years with bacteriuria retrospectively to assess recent trends of antimicrobial resistance, underlying structural abnormalities of the urinary tract, and severity of symptoms associated with it. Ultrasonography was done in children under 2 years with a history of recurrent UTI to exclude associated structural abnormalities of the urinary tract.

Results: Of 255 studied children, 58% were female. Ultrasonography of the kidney and bladder was performed in 116 children, which revealed CAKUT in 38% (n=44). Children with CAKUT commonly presented with fever (36%) alone or in combination with other features. The most common pathogen was E coli (60%), which was very sensitive to intravenous aminoglycosides (95-100%) and carbapenems (96%) but had less sensitive to cephalosporins (43%). E coli showed higher resistance to oral cephalosporins and quinolones (62% and 54%, respectively). E coli had a high (93%) and Klebsiella spp had a low (63%) sensitivity to nitrofurantoin.

Conclusion: This study revealed that about one fifth of the children with bacteriuria had CAKUT. A higher resistance pattern was observed to commonly used oral antimicrobial agents, which eventually narrows down the choice of empirical antibiotic.

The Essential History of a Patient with Pearson Marrow, a Case Report

Pearson syndrome is a rare mitochondrial disorder confirmed by mt-DNA deletion which typically occurs in the first two years of life. That is to say children are at high fatal risk, most infants are marked with some common features especially anemia and pancreatitis, which results in death in early childhood. A 6-month-old Iranian female infant was presented with macrocytic anemia, required packed red blood cell transfusions. She also was affected by exocrine pancreatic dysfunction, in which she underwent Creon treatment.

By first year of age she had experienced some severe metabolic crises intermittently. After hospitalized for some months she was expired unfortunately. In conclusion, Pearson syndrome, as a rare disease affects many organs, such as liver, kidney, pancreas, bone marrow, which led to anemia, failure to thrive, and multi organ failure. In such cases, a physician must consider and evaluate all possible damages, especially anemia and pancreatitis. We present a case of Pearson syndrome with anemia

Percutaneous renal biopsy is the most common method for obtaining renal tissue. In this article, the authors first explained how to make a cheap model of phantom easily by sheep’s kidney in a bowl filled with jelly. Then in the attached video, they showed how to find the ideal site (lower pole of kidney) and in real time, traced biopsy needle from jelly surface to kidney concomitant with ultrasound screen.

A 12-year-old Boy with Generalized Edema