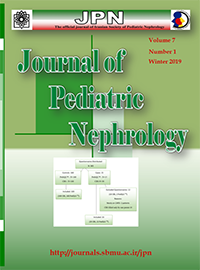 Transient proteinuria in children can be idiopathic or secondary to exercise or fever. Exercise related proteinuria usually is derived from low renal blood flow to the kidneys. It usually is defined as urinary protein excretion higher than 100-150 mg/m2/day and ends 24 hours after exercise. The intensity of exercise has a main role in the amount of protein excreting in the urine. It usually is transient. However, further assessment is needed to exclude systemic diseases if proteinuria is present besides hematuria, if it does not disappear after 48 hours, or if more than 1 gram of protein is excreted from the urine in a day.

Introduction: Chronic kidney diseases are associated with a poor quality of life in patients and their families. Previous studies have shown a three-fold higher rate of exhaustion in peritoneal dialysis compared to hemodialysis patients and their families. Here we studied the quality of life and caregiver’s burden of children receiving chronic ambulatory peritoneal dialysis (CAPD) in comparison with other chronic diseases among pediatric patients.

Materials and Methods: This prospective case-control survey was conducted between 2013 and 2014 in Ali- Asghar Children’s Hospital. The inclusion criteria were age below 18 years and having a chronic disease diagnosed at least six months earlier. The parents of 13 children on peritoneal dialysis (cases) and 160 children with other chronic diseases(controls) were requested to complete the Pediatric Quality of Life Inventory (PedsQL™ 4.0™) appropriate to the patient’s age and the Caregiver Burden Scale (CBS).  Independent t-test was applied to compare the variables between the two groups. P-values < 0.05 were considered significant.

Conclusions: CAPD children and their parents had better a PedsQL™ 4.0™ score and a lower CBS compared to children with other chronic diseases. The most affected area of the quality of life was school functioning in the CAPD group and somatic symptoms in the control group.

Materials and Methods: This study was carried out by analyzing case notes of children admitted to the pediatric medical ward of University of Calabar Teaching Hospital, Calabar, Nigeria between January 2006 and December 2016.

Results:  Of 8,711 children admitted during these ten years, 216 (2.5%) had renal disorders. Acute glomerulonephritis (AGN) was the commonest renal disorder observed in 64 (29.6%) cases followed by urinary tract infection (UTI) (n=60, 27.8%) and nephrotic syndrome (NS) (n=49, 22.7%). Other diseases included nephroblastoma, chronic renal failure, acute renal failure, and posterior urethra valves. Similarly, the above findings were seen in our previous study with AGN being the commonest followed by NS and then UTI. Other findings in this study, including polycystic kidney disease, renal calculi, hemolytic uremic syndrome, HIV, and sickle cell nephropathies, were not seen in the previous study. The case fatality rate was 1.9%, which was mainly due to the complications of acute nephritis.

Introduction: Atypical hemolytic uremic syndrome (HUS) is defined as a heterogeneous group of disorders. Plasma infusion or plasma exchange is the rescue therapy for this life-threatening syndrome. There is no evidence for the volume of plasma required to induce remission.
Materials and Methods: Between 2007 and 2018, Forty – two patients (M=20, F=22) with a diagnosis of recurrent or familial atypical hemolytic uremic syndrome (aHUS) who were admitted to Ali-Asgar Children’s Hospital were enrolled in this observational retrospective study. The total volume of plasma required for normalizing platelet (>150000) and LDH (<500 IU), eliminating hemolysis, and decreasing serum creatinine at first presentation of disease was calculated. Patients with TTP, vasculitis, and post infectious HUS were excluded.
Results: The mean age of the patients was 53 months (3-144 m). The majority of patients achieved remission at first presentation by plasma infusion (5 under peritoneal dialysis and 4 under hemodialysis) but ten patients required plasmapheresis. A total of 980 units of FFP perfused with a total volume of 195.975 L. The median (range) total plasma volume required for remission was 166 ml/kg (43-2850 ml/kg).

Conclusions: This study showed that the required plasma volume for the acute phase of atypical HUS for controlling the first attack of disease.

Evaluation of Knowledge, Attitude, and Practice of Mothers Presenting to Pediatric Clinic Regarding Urinary Tract Infection Prevention in Children

Materials and Methods: This cross-sectional descriptive-analytic study was performed in the Pediatric Clinic of Imam Khomeini Hospital to determine the knowledge, attitude, and practice of mothers about UTI in children and to evaluate its relationships with some demographic features. The data collection tool was a researcher-made questionnaire based on the literature review. The collected data were analyzed using SPSS 22 software and P-values less than 5% were considered significant.

Results: One hundred and fifteen mothers who presented to the Pediatric Clinic of Imam Khomeini Hospital participated in this study. The average knowledge, attitude, and practice score in the first part and the practice score in the second part was 6.21, 47.85, 13.86, and 10.66, respectively.

Conclusions: The significant relationship between access to information resources and the maternal knowledge and attitude scores confirms the importance of awareness in improving the knowledge of mothers in preventing urinary tract infection.

Growth in Patients with Vesicoureteral Reflux

Vesicoureteral reflux (VUR) is an important cause of proteinuria, hypertension, and end-stage renal disease. Isolated VUR and its complications might impair physical growth, which are discussed in this editorial.