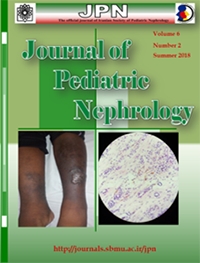 Clinical and Microbiological Profile of Children with Urinary Tract Infection

Introduction: Urinary tract infection is one of the common bacterial infections seen in infants and children. As children present with non-specific symptoms, a diagnosis of UTI is often missed or it is diagnosed very late. A wide range of organisms with varying antibiotic sensitivity patterns have been known to cause UTI. The objectives of the study were:

Materials and Methods: A retrospective Study was conducted in the Department of Pediatrics, CHRI, for 2 years from Jan 2014 to December 2016. The data of the children who met the inclusion criteria were collected from the case records. The collected data was tabulated and analyzed using IBM SPSS version 21.

Results: Males comprised a higher proportion of subjects in <1 year and 1-5 years when compared to females. Fever was the most common presenting symptom in the study population, which was seen in 220 (80.8%) children. The number of children with a positive culture for E.coli was 154 (56.0%) and Klebsiella was isolated in 37 (13.45%) children. A high proportion of E coli and Klebsiella species showed resistance to beta lactams and fluoroquinolones. E.coli was the most common organism in all age groups. The proportion of females was higher in the E. coli group (58.9%). Klebsiella had the highest proportion of resistance to more than 2 drugs (82.4%).

Conclusions: The most common age group affected by urinary tract infection is below 1 year with a male preponderance followed by above 5 years with a female preponderance. The most common isolated organism in all age groups was E. coli, which was found to be resistant to beta lactams and fluoroquinolones. Therefore, in any child with suspected, it is advised to start empirical therapy with an antibiotic, like amikacin and nitrofurantoin, and wait for the results of urine culture and sensitivity testing.

Introduction: The pattern of kidney diseases in children may vary from place to place and is not documented in most parts of India including ours. Documenting the spectrum may be important as it can have several uses.

Materials and Methods: This hospital-based retrospective descriptive study was done over a 5-year period.

Conclusions: Postinfectious glomerulonephritis was the most common cause of renal admission in our series. Glomerular diseases constituted three quarters of all renal diseases. The load of tubular disorders was very low.

Introduction: Steroid resistant nephrotic syndrome due to idiopathic focal segmental glomerulosclerosis (FSGS) or genetic mutations is one of the most common causes of end-stage renal disease (ESRD) that leads to renal transplantation. The relapse of the disease in the transplanted kidney, despite proper therapeutic management pre and post transplantation, may result in graft loss. Lack of accurate data about the status of transplanted patients due to FSGS encouraged us to obtain data from all pediatric nephrologists in Iran to achieve better pre and post transplantation therapeutic management.

Material and Methods: The personal data of the pediatric nephrologist as well as the data of surgical and medical management prior to transplantation, relapse in the allograft kidney, and the therapeutic response rate after relapse were collected via a questionnaire.

Results: Of 82 cases of FSGS from 1998 to 2018, 23 had relapse, mostly within 1 year after transplantation. When relapse occurred, nearly all centers used plasmapheresis and rituximab and some used angiotensin converting enzyme inhibitor (ACEI) or angiotensin receptor blocker (ARB) in addition to immunosuppressive medications and methyl prednisolone pulse therapy. Genetic studies were done in only two centers and there was no difference in immunosuppressive medications between these two centers and the idiopathic group. Pre-transplant plasmapheresis and rituximab were administered in four centers, while two centers used IVIG and one center only used plasmapheresis. Delayed graft function (DGF) was negative in 7 and positive in 9 centers. In most centers, immunosuppressive therapy consisted of a corticosteroid, mycophenolate mofetil, and tacrolimus. Relapse and recovery rates varied from less than 10% to more than 50% in all centers. Seven centers had no response to any medication. The lowest relapse rates were seen in two centers that had deceased donors and used rituximab and plasmapheresis prior to transplantation.

Conclusion: It can be concluded that with regard to the possibility of relapse after transplantation and variable therapeutic management modalities before and after transplantation, it is reasonable that genetic analysis of mutations, identification of idiopathic and high-risk cases, and use of appropriate therapeutic protocols should be considered to decrease the relapse rate.

This is a report of a 12-year-old Nigerian adolescent male with SRNS who developed cutaneous Kaposi sarcoma following a prolong use of cyclosporine A. This case should serve as a reminder for the possibility of malignancy development, especially Kaposi sarcoma, when SRNS patients receive cyclosporine as a steroid-sparing immunosuppressive therapy.

We described a full-term male infant with ARPKD born with an extremely distended abdomen and anuria. Bilateral nephrectomy and open liver biopsy were performed during the first month of hospitalization, as well as the insertion of a peritoneal dialysis catheter. On the 59th day of life, the baby`s condition abruptly deteriorated and he showed a decreased level of consciousness, coma (GCS=3), and severe anemia. Head ultrasound and head CT scan revealed large hemorrhage in the left cerebral hemisphere. Hemostasis parameters, as well as clinical and laboratory signs of infection, were in referral ranges at the time of neurological deterioration. MRI showed large hemorrhages in the left ventricle and left cerebral hemisphere but a preexisting intracranial aneurism (ICA) in the site of hemorrhage could not be diagnosed for sure. The baby died on the 66th day of life.