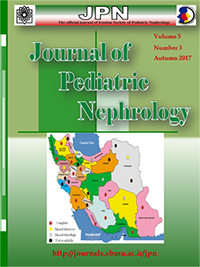 Nephrotic Syndrome is a collection of symptoms due to glomerular damage, characterized by proteinuria ≥3.5g/day or a protein-creatinine ratio ≥2. From an etiological point of view, there are three forms of nephrotic syndrome, including congenital, primary, and secondary. The first sign of the disease is periorbital edema, especially in the morning. Diagnostic confirmation is done through evaluation of urine protein, serum electrolytes, BUN, Cr, Albumin, and cholesterol. The main treatment goals of nephrotic syndrome are decreasing proteinuria, preventing complications, and protecting the renal function via appropriate drugs and diet.

The main objective of this study was to review diets required in nephrotic syndrome in children: Protein at a diose of 0.8 mg/kg/day is the most effective diet in nephrotic patients. Low-fat diets (calorie intake <30% and cholesterol ≤200mg/day) can improve hyperlipidemia. Salt and water intake should be restricted in the range of less than 2 gr/day and 1-1.5 liters/day, respectively. Nephrotic syndrome patients have iron, copper, zinc, and calcium deficiency due to increased urine protein excretion or concomitant metabolic disorders.

Introduction: Malnutrition and inflammation are considered risk factors of morbidity, hospitalization, and mortality in chronic kidney disease (CKD) children. The aim of this study was to determine the prevalence and severity of failure to thrive (FTT) in children with moderate to severe CKD.

Materials and Methods: This cross-sectional study was conducted in 84 children with CKD (30 female, 54 males) aged 2-16 years old from June 2014 to June 2015.The inclusion criteria were eGFR less than 90 ml/min/1.73m2, being healthy in the month before the visit, and lack other chronic diseases except CKD. Anthropometric data including the body mass index, height, weight, and mid upper arm circumference were collected. Protein wasting energy was scored and the severity of failure to thrive was estimated using Gomez and Jelliffe classifications. P-values less than 0.05 were considered significant

Results: Glomerulopathy and hereditary tubulopathy were the main causes of underlying disease. About 79% of CKD children had FTT and the rate increased with a decline in the renal function (p-value< 0.05). Using modified PWE, 65.5% were identified to score ≥2, which was more frequent in eGFR less than 30 (P>0.05). A quarter of the patients with FTT were classified as no PWE and vice versa.

Conclusion: The majority of the children with moderate to severe chronic kidney disease had failure to thrive and protein wasting energy. There was no correlation between inflammatory markers and the severity of CKD or the presence of failure to thrive.

Materials and Methods: We assessed the infections etiology of 648 episodes. Type of infection and etiology were compared between genders. Also, for every uropathogen, a comparison was done between febrile and afebrile infections. Chi square was used for data analysis and P values ≤0.05 were considered as a significant difference.

Introduction: Cryptorchidism is the most common congenital anomaly in male genitalia in newborns with a frequency of 3% in term and 30% in preterm male newborns. Cryptorchidism is also known as undescended testis (UDT), which can be bilateral or unilateral. The aim of the study was to evaluate all cases with UDT referred to our center during 5 years.

Materials and Method: All UDT cases that were referred to Children’s Medical Center during the last 5 years were included in our retrospective study. The data were collected from the patients’ records and one medical student entered the data in the questionnaire designed for the study.

Introduction: Inherited and acquired renal tubular disorders including cystic Kidney disease, cystinosis, Bartter’s syndrome, Liddle syndrome, Gordon syndrome, nephrogenic diabetes insipidus, and drug-induced tubular injury are the frequent causes of end stage renal disease (ESRD) in children manifesting with chronic kidney disease (CKD). This is a report of the etiology and incidence of tubulopathies in a cohort of Iranian children across the country.

Materials and Methods: This descriptive observational study was conducted from March 2013 to October 2013. A list of tubulopathy disorders was emailed to 70 members of the Iranian Society of Pediatric Nephrology in different provinces of Iran practicing in both university affiliated and non-affiliated hospitals. They were requested to report the number of patients with specific International Classification of Disease (ICD-10) codes admitted to their hospitals between 2006 and 2013. Data are presented as numbers and percentages.

Results: Of 31 participating centers, 23 completed and returned the spreadsheets. Of the 2940 reported cases,the three most frequent tubulopathies were renal tubular acidosis (RTA) (33%), calcium disorders (27%), and cystic diseases (17%). Considering Tehran and Shiraz as referral centers, RTA and cystinosis were mostly reported from Kermanand Urmia, respectively. Furthermore, idiopathic hypercalciuria, cystinuria, and hyperoxaluria were the most common causes of hereditary kidney stone in 281 children reported from Bandarabas, Tabriz, and Shiraz, respectively

Conclusions: Our findings regarding the high incidence and different etiologies of inherited tubulopathies may provide a basis for designing targeted therapeutic interventions in the future and strategies for gene therapy of these complex disorders.

Management of Renal Abscess in a 5-Year-Old Girl, A Case Report