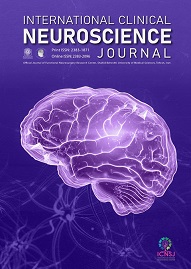 The aim of "International Clinical Neuroscience Journal" is to increase knowledge, stimulate research in the field of neurology and promote better management of patients with neurological disorders. To achieve this goal, the journalis devoted to rapid publication of original research works which are of great interest to the broad community of neuroscientists. Manuscripts in all areas of neuroscienceincluding molecular, cellular, developmental, systems, behavioral and cognitive, and related fields will be considered for publication. This journal is a quarterly, peer-reviewed primary research journal of Functional Neurosurgery Research Center, affiliated to Shahid Beheshti University of Medical Sciences.

Diffuse glioma is a primary brain tumor that originates from glial supportive cells and is the most common type of intra-axial brain tumor. Open tumor resection is the first step in the treatment of diffuse gliomas. The extent of resection (EOR) directly influences clinical outcomes in glioma surgery. However, resection of diffuse glioma is encountered with the problem of macroscopic and even microscopic similarity of normal brain and tumor. Furthermore, maximizing EOR requires attention because a mistake in identifying and preserving normal brain regions in complete resection can lead to catastrophic complications.

Schizophrenia: The Dark Side of Toxoplasmosis

Toxoplasma gondii is an intracellular parasite that has been associated with several mental disorders. It usually causes an inapparent primary infection. Found worldwide, T. gondii is capable of infecting virtually all warm-blooded animals.1-3
Schizophrenia is a neurological disorder characterized with long-term and devastating neuropsychological problems, usually presenting in adolescents or young adults. The disease affects almost 1.1% of the global population including all races and ethnic groups with an equal prevalence in both sexes.1 T. gondii seroprevalence is strongly associated with 12-month generalized anxiety disorder but not with other anxiety, depressive, or alcohol-related disorders. Because of the intracellular nature of some parasites, their treatment and development of new drugs is a major challenge for scientists.4 Recently, the use of nanoparticles and nano-scaffolds has suggested for the treatment of parasitic diseases, although limited research has been done in this regard.5-7

Effect of Curcumin on Beta-Amyloid Plasma Level in Alzheimer Disease: A Systematic Review and Meta-analysis

Alzheimer’s disease is known as a most common dementia disorder in the world. The famous hypothesis about the cause of this disease is beta-amyloid (Aβ ) accumulation in the brain. There is a widespread neuroinflammation in the patient’s brain, leading to neuronal apoptosis and brain atrophy. Curcumin is a well-known anti-inflammation and anti-oxidant ingredient. It can easily cross the blood-brain barrier. There are controversial results about the effects of curcumin on Aβ clearance and metabolism in Alzheimer’s disease and the elderly. The aim of this meta-analysis and systematic review was to review the effect of curcumin on Aβ clearance in clinical studies. We performed a systematic review and meta-analysis on the three randomized clinical trials (RCTs) and one pilot study that assessed the effect of curcumin on Aβ plasma level in Alzheimer’s disease. For this purpose, we searched PubMed and Scopus databases up to December 2020. Our result showed there was no significant change in serum Aβ level (weighted mean difference [WMD]: 5.3, 95% CI: 0.78-9.97) following curcumin consumption in patients with Alzheimer’s disease. Further clinical trials should be done to evaluate the effects of curcumin in Aβ level in Alzheimer’s disease.

Poor inhibitory control, continuous attention deficit, problem-solving, and behavioral inhibition are cognitive deficits in children with attention deficit hyperactivity disorder that they are exhibit in tests related to executive functions. Evidences suggest differences in some executive functions, such as behavioral inhibition between boys and girls. Attention deficit hyperactivity disorder has its neurobiological basis and most empirical evidence indicates delayed frontal lobe development in children with this disorder.

Therefore, the purpose of this study was to review cognitive disorders in children with attention deficit hyperactivity disorder with an emphasis on executive functions.


Background: The nucleus basalis magnocellularis (NBM) sends projections to the hippocampus that are implicated in learning and memory formation. Despite ample evidence proposing that cognitive function impairment related to neurodegeneration, it may result from alteration of biochemical substances. We aimed to investigate the effects of NBM lesions on the hippocampal interleukin-1beta (IL-1β), brain-derived neurotrophic factor (BDNF), and corticosterone levels, as inflammation markers, and hallmarks of neurodegeneration, stress, and metabolic status.

Methods: Thirty-six male Wistar rats were randomly put in control, sham, and NBM-lesioned groups. After inducing the lesion using an intra-NBM injection of 10 μg ibotenic acid (5 μg/μL, each side) in rats, memory was estimated using the passive avoidance test. Moreover, serum and hippocampal IL-1β levels, as well as the hippocampal corticosterone, BDNF, and glucose levels were measured after 42 days.

Conclusion: The synchronous alterations of some hippocampal factors, including BDNF, corticosterone, IL-1β, and glucose, caused by NBM lesion suggest that their interaction might play a significant role in neurodegeneration and relevant learning and memory impairments.

Background: Mental health is a significant problem in developed and developing countries which influences all aspects of life. We aimed to evaluate the status of Iranian students’ mental health.

Methods: This cross-sectional study was performed on 2052 elementary school students located in Tehran, Iran, in September 2018. We used the Census sampling method for sampling and the general health questionnaire comprising 28 items. For statistical analysis SPSS software, version 21 was used.


Background: Executive dysfunction is seen in idiopathic generalized epilepsy (IGE). The Frontal Assessment Battery (FAB) is a short neuropsychological instrument designed in clinical settings to evaluate frontal lobe activity. We aimed to assess the clinical use of FAB in patients with IGE for to detect executive impairment.

Results: The FAB score in patients with IGE was significantly lower compared to healthy participants. In motor programming tasks, patients with IGE performed substantially worse. However, no correlation was found between FAB and neuropsychological task and clinical characteristics.

Conclusion: Executive dysfunction was present in patients with IGE and FAB may be used in these patients as an effective tool for evaluating frontal lobe function.

The Relationship Between Emotional Self-efficacy, Sensation Seeking, and the Quality of Child-Parent Relationships With Quality of Life Mediated by High-Risk Sexual Behaviors in Students

Neurological involvement in COVID-19 infection is increasing all over the world. Neurological manifestations include headache, dizziness, stroke, seizure, encephalopathy, neuropathy, and skeletal muscle injury. While many patients with CNS involvement have normal neuroimaging, the others reveal significant abnormalities. In this article, we report four patients with neurological manifestations of the Covid-19 infection and its relevant abnormalities in brain magnetic resonance imaging.

A Giant Frontal Meningioma with Psychiatric Symptoms in a Young Woman: A Case Report

Background:Frontal meningioma is often asymptomatic but patients might experience psychiatric symptoms. Since symptoms are atypical in giant meningioma, to the best of our knowledge, we present a rare clinical scenario.

Case Presentation: A 24-year old female patient with no medical history presented with two months of depressive symptoms, personality changes such as easy irritability, and feelings of frustration and mental depression, as well as forgetfulness and blurred vision. Brain magnetic resonance imaging (MRI) revealed a well-defined markedly enhancing lesion in the left frontal region measuring 65 x 70 x 70 mm with mass effects to the adjacent brain tissue and associated surrounding edema which was pressed to the frontal horn of the lateral ventricle. The patient underwent frontal unilateral craniotomy and excision of the tumor. After surgery, the quality of life was improved.

Conclusion: Meningioma with psychiatric symptoms is quite rare. This clinical case helps clinicians avoid missing symptoms and use appropriate management strategies for patients with giant meningiomas.