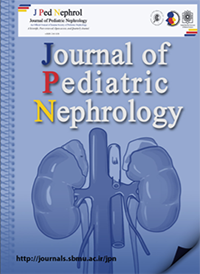 Background and Aim: The prevalence of Chronic Kidney Disease (CKD) in children is 18 per million. The first stage of atherosclerosis in children at risk begins with vascular endothelial dysfunction and thickening of the intima-media of the arteries. The aim of this study was to evaluate the thickness of the carotid artery intima-media in children with early-stage chronic kidney disease.

Methods: The cases were selected from patients with chronic renal failure presenting to the pediatric nephrology clinic whose CKD was confirmed by ultrasound, kidney scan or laboratory tests. Ultrasound of all patients was performed by a sonographer and an ultrasound machine. The control group was also selected from subjects who presented to a kidney clinic for routine examination and testing without a history of any diseases and did not have kidney or cardiovascular disease. Chi-square and t tests, one-way analysis of variance, and Pearson’s correlation coefficient were applied to compare and describe the results.Results: One-way analysis of variance showed no significant difference in the mean carotid intima-media thickness (CIMT) between patients with early-stage CKD and control subjects. Moreover, according to the results of the Pearson’s correlation coefficient, there was no significant relationship between CIMT and laboratory variables in the patient group.

Conclusion: No significant relationship was observed in the carotid artery intima-media thickness between patients with early-stage CKD and control group. Thus, CIMT is not a reliable method in selection of high risk patients in early stages CKD but it can be very useful in high stages CKD.