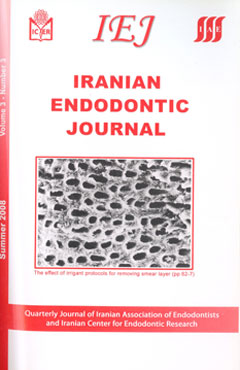 Comparison of Pulpotomy with for Mocresol and MTA in Primary Molars: a Systematic Review and Meta - Analysis

Introduction: There are various studies looking at the effects of formocresol (FC) and mineral trioxide aggregate (MTA) on pulpotomy of primary molars. This is a systematic review of literature comparing the success rates of MTA and FC in pulpotomy of primary molars. Materials and Methods: The study list was obtained using PubMed, EMBASE, Scopus, Science Citation Index, Iran Medex, Google Scholar, the Cochrane Library, and also some hand searches contains through dental journals approved by the Iranian Ministry of Health. Papers which met the inclusion were accepted. The quality of studies for the meta-analysis was assessed by a series of validity criteria according to Jadad's scale. Eight qualified studies met the criteria. Terms of clinical outcomes and radiographic findings were evaluated in all studies to assess clinical success and root resorption. Fixed model was applied to aggregate the data of homogenous studies. A random effect model was carried out for measuring the effect size of heterogeneous studies. Results: The overall clinical and radiographic success rates based on the data suggested that MTA was superior to FC (P=0.004) with the Odds Ratio=3.535 and 95% confidence interval (1.494-8.369). Conclusion: Primary molars pulpotomy with MTA have better clinical and radiographic success rates than FC.

INTRODUCTION: The aim of this in vitro study was to compare the effectiveness of three intracanal medicaments in disinfecting the root canal and dentin of experimentally infected human teeth with Enterococcus faecalis (EF). MATERIALS AND METHODS: One hundred extracted human single-rooted teeth were used. After root canal preparation, teeth were mounted in epoxy resin. Following sterilization, the teeth were infected for 28 days with EF. Then root canals were filled with one of three different disinfectants: viscous 2% Chlorhexidine (CHX), calcium hydroxide paste (CH) or a mixture of CH and CHX (n=30 in each group). Antimicrobial assessments were performed at 1, 3 and 7 days (n=10 in each time period). Microbial samples were obtained from root canals before and after the experiment. Also dentin samples were examined. The data was analyzed using Two- Way ANOVA test. RESULTS: The findings showed that there was no difference between experimental groups at different time periods. The mixture of CH/CHX in 7 days was able to eliminate EF completely from root canal system. The most elimination of EF was from dentinal tubules. CONCLUSION: According to the results of this in vitro study, viscous 2% CHX, mixture of CH with distilled water and 2% CHX are all effective disinfectants.

INTRODUCTION: The purpose of this in vitro study was to compare working length (WL) changes after straight-line access (SLA) and different coronal flaring (CF) methods. MATERIALS AND METHODS: Coronal access preparations were made (without SLA) in molar teeth to allow access to 120 canal orifices with a hand file. The suitable cusp and root tips were then flattened to facilitate reproducible and accurate measurements. WL was determined before and after SLA and after different methods of CF. These methods consisted of: stainless-steel (SS) hand files + NiTi hand files, SS hand files + Gates Glidden burs (GG) (#1 to #3), (#3 to #1), GG in step-back manner and crown-down manner without using SS hand files and NiTi rotary orifice shapers. Data was analyzed by paired T-test and coefficient of variance. RESULTS: The mean difference in WL changes after SLA was statistically greater than other methods of CF (P<0.001). The mean difference of WL after CF, in SS hand files + GG (#3 to #1) group was significantly different with SS hand files + NiTi hand files group (P<0.004) and NiTi rotary group (P<0.04). Also the mean changes of WL in SS hand files + NiTi hand files group was significantly different with GG (#1 to #3) group (P<0.01). CONCLUSION: It is better to established working length after SLA. Least changes in WL was occurred with NiTi rotary orifice shapers after coronal flaring.

INTRODUCTION: There are several methods for evaluating microleakage in dentistry, for example dye or bacterial leakage, electro-chemical methods, radioisotope labeling and fluid filtration. The purpose of this study was to assemble the fluid filtration system for quantitative evaluation of microleakage in dental materials. MATERIALS AND METHODS: The roots were connected to a tube filled with an underwater pressure supply. A bubble was introduced into the water to measure endodontic leakage. A digital camera and professional software were utilized to record and measure the bubble displacement. RESULTS: Our system was constructed successfully and functioned correctly. CONCLUSION: In this pilot study we found this system efficient for the evaluation of microleakage of dental materials.

INTRODUCTION: This study was carried out to evaluate the technical quality of root canal treatment (RCT) performed by undergraduate dental students at the Islamic Azad University in Tehran, Iran. MATERIALS AND METHODS: Four-hundred records of patients who had received RCT at faculty of dentistry, between the years 2004-2006 were evaluated. For each treated tooth at least three periapical x-rays were assessed: preoperative, working length measurement, and postoperative. Evaluation of root canal filling was based on two variables: length and density. The filling length was recorded as adequate, under- or overfilled. Density of filling was recorded as poor or adequate. Fillings with adequate length and density were recorded as acceptable. Detected iatrogenic errors were: ledge formations, root perforations, furcation perforations, strip perforations and presence of fractured instruments. Results were evaluated statistically using one-way ANOVA and Chi-square analysis. RESULTS: Out of the 400 teeth, 50.5% had at least one of the mentioned errors. Acceptable filling was observed in 32.5% of all studied teeth. Ledge was found in 17.5% of the teeth. Canal curvature was the most important factor associated with ledge formation (P<0.05). CONCLUSION: The technical quality of RCT performed by undergraduate dental students using step-back preparation and cold lateral condensation was classified as acceptable in 32.5% of the cases.

Maxillary second molar with two palatal roots is a rare dental anatomy. The diagnosis and treatment of exceeded root may create challenge for clinicians. The authors discuss the retreatment of a maxillary second molar in which exceeded root was undiagnosed in previous treatment. The case report underlines the importance of complete knowledge about root canal morphology which achieved by careful clinical and radiographic examination. In retreatment procedures clinicians should consider missed canals.

The Importance of Long Time Follow-Up after Vital Pulp Therapy: A Case Report

This report describes a case of an eight years old girl who was treated for complicated crown fracture of right maxillary central incisor because of a sport accident. For the tooth total pulpotomy was performed in order to achieve apexogenesis and the tooth was restored with a composite resin. The patient was reviewed over 10 years. At first the tooth showed continued root development and complete apex formation following vital pulp therapy, however, after 10 years the tooth developed pulp necrosis and periapical radiolucency. Following root canal therapy, periapical radiolucency has been healed.