The Accuracy of Plain Radiography in Detection of Traumatic Intrathoracic Injuries

Screening Characteristics of Ultrasonography in Detection of Ankle Fractures

Introduction:Â Midazolam has turned into a common drug for pediatric procedural sedation and analgesia.Â However, there is not much data regarding its proper dose and potential side effects in the Iranian childrenÂ population. Therefore, the present study was done to compare 2 doses of IV midazolam in this regard.Â Methods:Â The present clinical trial was performed to compare 0.1 and 0.3 mg/kg doses of IV midazolam in induction ofÂ sedation for head trauma infant patients in need of brain computed tomography (CT) scan. Conscious infantsÂ under 2 years old, with stable hemodynamics were included. Onset and duration of action as well as probableÂ side effects were compared between the two groups using SPSS version 22.Â Results:Â 110 infants with the meanÂ age of 14.0 Â§5.9 months (range: 4â€“24) and mean weight of 9.7Â±2 kg (range: 5â€“15) were randomly allocated toÂ one of the 2 study groups (54.6% female). Success rate in 0.1 and 0.3 mg /kg groups were 38.2% (21 patients)and 60% (33 patients), respectively (p=0.018). Overall, 56 (50.9%) patients did not reach proper sedation andÂ were sedated receiving ketamine (22 patients) or another dose of midazolam (34 patients, mean additional doseÂ needed was 2.1Â±1.1 mg).Â Conclusion:Â The results of the present study demonstrated the higher success rate andÂ longer duration of action for 0.3 mg /kg midazolam compared to 0.1 mg /kg. The groups were equal regardingÂ onset of action, effect on vital signs and probable side effects.

The Reasons of Renal Transplant Recipientsâ€™ Admission to the Emergency Department; a Case Series Study

Methods:Â This retrospective case series study analyzed the reasons of renal transplant recipientsâ€™ admission to one ED between 2011 and 2014. The patient data were collected via a checklist and presented using descriptive statistics tools.

A 48-year-old Man with Epigastric Pain and Melena

A 48-year-old male patient presented to the emergency department with the complaints of epigastric pain and melena for the past 3 days. The pain was started suddenly and has progressed and after a while, he passed melena stool. He also mentioned some episodes of vomiting that was not bloody. The pain score was about 8/10 (based on verbal quantitative scale) and slightly radiated to back. He loosed his appetite and the pain aggravated by meal. He did not use any drug regularly and had no positive medical history for specific disease or prior hospital admission. The patient was slightly pale and sweaty. His pulse rate was 80/minute and blood pressure was elevated as 180/100 mm Hg. Routine blood tests such as liver enzyme and serum amylase levels were normal. Complete blood cell count showed mild anemia (Haemoglobin =10 g/dl) and leucocytosis (16600/mm3). On physical examination, there were not any positive findings except mild epigastric tenderness without rebound or guarding. Electrocardiography revealed normal sinus rhythm without any pathologic findings. The patient was admitted in surgical ward and plain abdominal computed tomography (CT) scan and abdominal CT angiogram was done. The findings of CT are shown in figures 1A-D.

Tarantula Bite in Iran, a Letter to the Editor

I read with great interest the case report titled â€œPeriumbilical pain with radiation to both legs following tarantula bite; a case reportâ€ published in Emergency journal.Â Tarantula spiders are not medically important except for some very limited species, which do not exist in Iran. Solifugae -orÂ rotailsÂ as they are called in Iran- are in fact another group of animals also called camel spiders (Figure 2). They are also venom-free and generally cause secondary infections in the site of their bites. Thus, it seems that the patient's signs and symptoms cannot be due to the rotail or tarantula bites. 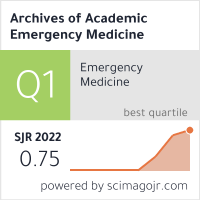