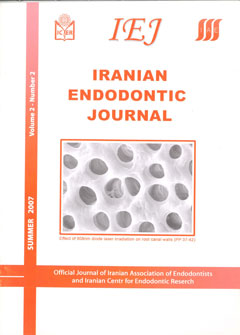 Introduction: This study was carried out to investigate the effect of 808nm diode laser irradiation on dentinal tubules of root canal wall. Materials and Methods: Twelve single-rooted teeth were used. After cleaning and shaping with rotary instruments by the crown down technique, the smear layer was removed by alternating irrigation with EDTA and sodium hypochlorite. The teeth were then randomly divided into experimental and control groups of six teeth each. In experimental group, laser irradiation was activated inside the canal and the teeth of the other group served as controls. Kruskal-Wallis and Friedman tests were used for comparing occluded dentinal tubules in different part of the roots. Results: Scanning electron microscopy showed that occluded dentinal tubules could be observed in all laser irradiated teeth; however, none of the control teeth showed occluded dentinal tubules. The Friedman test showed that in the laser irradiated group the best result was achieved in the apical third of the root canals compared with the middle (p<0.005) and cervical third (p<0.002). Dentinal tubules of the middle third were also significantly different from the cervical third as well (p<0.005). Conclusion: Laser radiation after removing smear layer could successfully occlude dentinal tubules and the best results was achieved at the apical part of the canal.

An Evaluation of the Sealing Ability of MTA and Resilon: A Bacterial Leakage Study

INTRODUCTION: The purpose of this study was to evaluate the sealing ability of gray-colored mineral trioxide aggregate (GMTA), white-colored MTA (WMTA), and Resilon as root filling materials. MATERIALS AND METHODS: Sixty-six human maxillary central incisors were used in the present study. In the group A, 20 teeth were filled with GMTA. In the group B, 20 teeth were filled with WMTA and in the group C, 20 teeth were filled with Resilon/Epiphany. Three teeth were used as positive (obturated using the single gutta-percha cone technique without sealer) and three were used as negative (obturated with gutta-percha and AH-26 sealer, coated with two layers of nail varnish) controls. A bacterial leakage model utilizing Enterococcus faecalis was used for evaluation. Leakage was noted when turbidity was observed. RESULTS: Controls behaved as expected. In the group A (GMTA) three samples, in the group B (WMTA) four samples, and in the group C (Resilon/Epiphany), two samples were leaked. There was no statistically significant difference between GMTA and WMTA or GMTA and Resilon. CONCLUSION: In conclusion, sealing ability of GMTA and WMTA was similar to Resilon as orthograde root filling materials.

INTRODUCTION: Traumatic injuries may affect the vitality and development of tooth. So divergence or parallelism of canal walls induces an open apex which is very susceptible to fracture. The aim of this study was to determine the stress distribution pattern in immature teeth and compare it with mature teeth. MATERIALS AND METHODS: In order to analyze stress distribution using finite element method, models were first designed according to actual samples by "ANSYS" software. Two models of the maxillary central incisors were designed, one mature and one with open apex. Mature tooth was designed as having undergone root canal therapy with gutta-percha and the immature one with both MTA plug and gutta-percha. Samples were loaded in seven stages and then, the stress distribution in each model was measured, using the "ANSYS" software. RESULTS: During gutta-percha condensation, the immature tooth transfers the stress directly to the external root surface where force is directly applied, whereas during masticatory occlusal forces, the stress is transferred to middle third of buccal and lingual surfaces and to buccal cervix in lunar shape. During traumatic forces, stress concentration was on the cervical region of buccal surface and middle third of buccal and lingual surfaces. MTA plug prevents stress distribution toward apical region and forces concentrate in dentin at the point where stress terminates. CONCLUSION: Within the limitations of this simulated mechanical analysis, it was confirmed that the pattern of stress distribution in mature and immature teeth is different. Cervical area of the buccal surface in immature teeth is one of the stress concentration areas, which contribute to the high rate of fracture in this area.

INTRODUCTION: Direct pulp capping (DPC) is coverage of exposed pulp by a biocompatible material after traumatic or carious exposure. The purpose of this procedure is to seal against bacterial leakage, stimulate dentinal barrier formation, and maintain the vitality of pulp. Several factors contribute to the consequence of this treatment such as material and the procedural technique. The aim of this study was to histological evaluation of three treatment methods (Laser+MTA, Laser+Ca(OH)2 and MTA alone) in direct pulp capping of cat's canines. MATERIALS AND METHODS: Thirty six canine teeth of 9 cats were selected for this experimental study. After anesthesia, the teeth were exposed under isolated condition. The teeth were randomly divided into three treatment groups. In group I, the pulp exposures were covered by Mineral Trioxide Aggregate (MTA) alone. In group II, the pulps after treating with Er: YAG laser, were covered by MTA. In group III, treating with laser and covering with Ca(OH)2 was performed. All cavities were filled by Amalgam after DPC. After 4 months, the animals were sacrificed and block sections were prepared. Then, the specimens were histologically evaluated according to the scores that designed by a pathologist. The data was analyzed by Mann-Whitney and Chi-square tests with significant level of 95%. RESULTS: Dentinal barrier was formed in all groups. Laser+MTA group showed nearly similar results to other groups in dentinal barrier formation, type and intensity of inflammatory responses and soft tissue changes (P>0.05). CONCLUSION: Although Laser+MTA had slightly better effects, but this difference was not statistically significant. Based on this study, it seems that laser treatment has no effect on outcome of DPC.

INTRODUCTION: The purpose of this study was to compare the apical sealing ability of lateral and vertical compaction techniques following immediate and delayed post space preparation. MATERIALS AND METHODS: Seventy-four distal and palatal roots of human extracted molars were instrumented and randomly divided into 4 experimental groups (n=15), two experimental control groups (n=5), and two positive and negative leakage controls (n=2). Canals were filled by lateral (groups 1 and 2) and vertical (groups 3 and 4) compaction techniques using Tubliseal sealer. Post space was prepared immediately after obturation in group 1 and after seven days in groups 2 and 4 using a # 3 Peeso drill. In group 3, post space was prepared immediately during down-packing phase. The teeth were kept in 2% methylen blue dye for seven days. The roots were sectioned buccolingually and the mean score of dye penetration was measured. Data was analyzed with T-test and one way ANOVA. RESULTS: There was significant difference in dye penetration between delayed and control-lateral compaction groups (p=0.009). There was also a significant difference in dye penetration between immediate and delayed lateral compaction groups (p=0.044). CONCLUSION: Less apical leakage in the cold lateral condensation and immediate post space preparation group was observed.

INTRODUCTION: A desirable characteristic of root canal irrigants is the ability of dissolving soft tissues. Sodium hypochlorite, an antibacterial and tissue solvent irrigant used in endodontic treatment is known to be toxic for periapical tissues. Chlorhexidine gluconate, an effective antimicrobial agent, is another irrigant with limited tissue dissolving ability. A mixture of a tetracycline isomer, an acid, and a detergent (MTAD), has recently been introduced as an alternative irrigant in root canal therapy. The purpose of this study was to evaluate the tissue dissolving effect of these root canal irrigants on bovine pulp tissue. MATERIALS AND METHODS: Fifty pieces of bovine pulp tissue 80 mg each were treated with either normal saline, MTAD, 2% chlorhexidine gluconate, 2.6% NaOCl or 5.25% NaOCl for 10 min at 37°C. Desiccated pre-treatment and post-treatment weights of samples were compared. Using Kruskal-Wallis and Mann-Whitney U tests, data was analyzed. RESULTS: Tissue dissolution effect of 5.25% NaOCl (85.98%) was statistically greater than that of all other solutions (P<0.05). Chlorhexidine gluconate had the weakest dissolution effect, and dissolved only 9.36% of the sample tissue. No significant differences were observed between the dissolution effects of normal saline or MTAD. CONCLUSION: Based on the results of this study, the use of NaOCl as intracanal irrigation during instrumentation is recommended, because of its greater tissue dissolution effect.

Evaluation of the Success Rate of Nonsurgical Single Visit Retreatment

Endodontic Treatment of a Maxillary Second Molar with Developmental Anomaly: A Case Report

Fusion is a rare occurrence in molar teeth. The purpose of this rare case presentation is to describe the nonsurgical endodontic treatment of maxillary molar. A 28-year-old patient was referred for endodontic treatment of her chronic apical abscess of right maxillary second molar. In the clinical examination, a sinus tract adjacent to involved tooth and a small crown of supernumerary tooth fused to the buccal surface of the molar at gingival margin was observed. Endodontic treatment was decided for the involved molar for functional reason. Recall examination, a year after completion of endodontic and restorative treatments, showed the tooth was clinically asymptomatic and there was no radiographic lucency around the apical region.