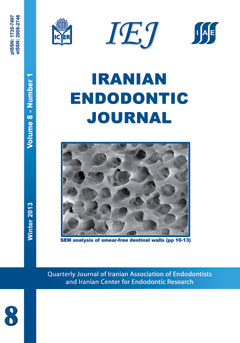 Introduction: Mineral trioxide aggregate (MTA) has been suggested for root-end filling, vital pulp therapy, apical plug, perforations repair, and root canal filling. Since the introduction of MTA in 1993, many studies about this material have been published. The aim of this survey was to illustrate statistical information about published articles in PubMed-index journals vis-à-vis the various aspects of this biomaterial. Material and Methods: A PubMed search was performed to retrieve the relative articles from 1993 to August 2012. The data of each article including publication year, journal name, number of authors, first author name, affiliations and study design were recorded. Citation of each article till 2009 was obtained from Scopus and Google scholar databases. Data were analyzed to determine the related scientometric indicators. Results: In total, 1027 articles were found in PubMed-indexed journals which show considerable increase from 2 papers in 1993 to 139 in 2011. While ~62% of articles had no level of evidence, only ~5% could be classified as having the highest level of evidence (LOE1); however, the majority of LOE1 articles originated from Iran (~1%: n=10). Journal of Endodontics, as the top rank journal, published 31.7% of MTA related articles. The majority of articles were four-authored (19.6%). Most of the articles originated from USA (21.9%), Brazil (18.5%) and Iran (8.76%). The average number of citation for the top ten articles from Scopus was 231. Conclusion: This data demonstrates that during the past two decades, research on this novel endodontic biomaterial had a rapid positive trend especially during the last 5 years. Further high-level evidence articles for the various clinical applications of MTA would result in superior clinical decision making and stronger scientific-based endodontic practice.

Introduction: Removal of root filling materials is one of the key steps in success of root canal retreatment. The purpose of this study was to evaluate the efficacy of H-File and ProTaper with or without chloroform in the removal of gutta-percha during retreatment of mandibular premolars. Materials and Methods: Sixty mandibular premolars with one canal, and curvatures less than 30 degrees were used in this experimental study. They were instrumented with K-files and laterally obturated with condensed gutta-percha using AH26 as the sealer and were stored in 100% humidity at 37°C for 2 weeks. The teeth were randomly divided into four groups of 15 teeth each. Removal of gutta-percha was performed with H-File and ProTaper. All techniques were used with or without chloroform. The teeth were split longitudinally and the area of remaining gutta-percha/sealer on the root canal wall was explored under stereomicroscope. Retreatment time duration was also recorded for each sample. Data were analyzed statistically by Two-way ANOVA, t-test and Tukey’s. Results: In all groups, no significant difference was found in remaining gutta-percha and sealer with or without using chloroform, but chloroform shortened the time of retreatment. ProTaper left significantly less remaining filling materials than H-File (P<0.05). Retreatment time was significantly different between the studied groups (P<0.001). Conclusion: ProTaper Ni-Ti instruments proved to be more efficient and time-saving devices for removal of gutta-percha compared to H-File in canals with no or slight curvature.

Introduction: The purpose of this study was to assess the effect of different irrigation protocols for smear layer removal on the bond strength of EndoSequence BC Sealer, a new bioceramic sealer, to root canal dentin. Materials and Methods: The middle third of forty-four extracted human teeth were sectioned horizontally to obtain 128 dentin disks. After standardization of canal spaces, dentin disks were immersed in 5.25% NaOCl for 20 min. The specimens were then randomly assigned to four groups (n=32) according to dentin treatment procedure: group 1, 17% EDTA (1 min); group 2, 17% EDTA (1 min) + 5.25% NaOCl (5 min); group 3, 17% EDTA (1 min) + 2% chlorhexidine (CHX) (5 min); and group 4, 17% EDTA (1 min) + saline (5 min). After dentin treatment, two specimens of each group were prepared for investigation with scanning electron microscopy (SEM).  Surface of root canal wall was assessed in each specimen. Then the canal spaces were filled with EndoSequence BC Sealer in the remaining specimens. Push-out bond-strength and failure modes were assessed. The data on push-out test were analyzed using one-way ANOVA test. The significance level was set at P=0.05. Results: There was no significant difference between the bond strengths of test groups (P=0.203). The bond failure was mainly cohesive for all groups. Conclusion: Under the conditions of this ex vivo study, it could be concluded that the application of 17% EDTA alone or followed by 5.25% NaOCl, 2% CHX, or saline resulted in similar bond strength of EndoSequence BC Sealer to dentinal walls.

Introduction: Vertical root fracture (VRF) is a complication which is chiefly diagnosed radiographically. Recently, film-based radiography has been substituted with digital radiography. At the moment, there is a wide range of monitors available in the market for viewing digital images. The present study aims to compare the diagnostic accuracy, sensitivity and specificity of medical and conventional monitors in detection of vertical root fractures. Material and Methods: In this in vitro study 228 extracted single-rooted human teeth were endodontically treated. Vertical root fractures were induced in 114 samples. The teeth were imaged by a digital charge-coupled device radiography using parallel technique. The images were evaluated by a radiologist and an endodontist on two medical and conventional liquid-crystal display (LCD) monitors twice. Z-test was used to analyze the sensitivity, accuracy and specificity of each monitor. Significance level was set at 0.05. Inter and intra observer agreements were calculated by Cohen’s kappa. Results: Accuracy, specificity and sensitivity for conventional monitor were calculated as 67.5%, 72%, 62.5% respectively; and data for medical grade monitor were 67.5%, 66.5% and 68% respectively. Statistical analysis showed no significant differences in detecting VRF between the two techniques. Inter-observer agreement for conventional and medical monitor was 0.47 and 0.55 respectively (moderate). Intra-observer agreement was 0.78 for medical monitor and 0.87 for conventional one (substantial). Conclusion The type of monitor does not influence diagnosis of vertical root fractures.

The Level of Evidence in Two Leading Endodontic Journals

Introduction: The successful practice of dentistry, including endodontics, relies on a wide spectrum of dental research. The quantity and quality of research evidence in endodontics have seldom been evaluated. The aim of this study was to evaluate the level of evidence in current leading endodontic journals. Materials and Methods: All the articles published in 2000, 2006 and 2010 in two major endodontic journals (Journal of Endodontics and International Endodontic Journal) were evaluated. These articles were classified according to the level of evidence (LOE) using Oxford Scale from 0 to 5 and type of the study. Results: Of the articles assessed, 3.2% were clinical trials, 47.8% were experimental, 5.6% were animal studies and 43.4% were of other types. Subdivisions according to LOE were 4.3% as level 1, 0.9 % level 2, 7.3% level 3, 0.4% level 4 and 3.5% level 5. Overall, 83.6% of the articles were classified as “non-evidence-based”. There was a marginally significant increase in the percentage of articles with high level of evidence in recent years. Conclusion: There is a substantial shortage of articles with high level of evidence in clinical endodontics. However, there was a gradual increase in the number of high LOE articles published in both journals.

Introduction: Following avulsion, the periodontal ligament (PDL) cells are at risk of necrosis. To achieve a favorable survival prognosis, the PDL cells must be kept viability. Therefore, immediate replantation is considered as the treatment of choice and in case it is not possible, storing the tooth in an appropriate storage media should be considered. Oral Rehydration Solution (ORS) is a glucose-electrolyte solution which can keep the optimal osmolality as well as pH and can even provide nutrients which are necessary for cellular growth. The present study aimed to evaluate the effectiveness of different concentrations of ORS in maintaining the viability of the PDL cells at different time points. Materials and Methods: PDL cells were obtained from healthy extracted human premolars. Then, 8×10³ cells were seeded in each well of 96-well plate. Afterwards, each well was treated with ORS in three different concentrations and DMEM for 1, 3, 6, and 9 hours. Cell viability was determined by using the MTT assay. One way-ANOVA and post hoc (LSD) test were used for comparing the study groups. Results: According to the results, 25% and 50% concentrations of ORS were more effective in preserving the PDL cell viability and could maintain 79.98% and 68.34% of the PDL cells, respectively, at least for the last experimental time point (up to 9 hours). Conclusions: Therefore, our findings indicate that ORS might be a suitable storage medium for avulsed teeth.

Managing a Mandibular Second Premolar with Three-Canal and Taurodontism: A Case Report

Root canal anatomy diversity and aberrations are common especially in permanent dentition. A thorough understanding of the basic root canal anatomy and its diversities are necessary for successful endodontic treatment. Mandibular second premolars are usually single-rooted and have one root canal. Incidence of three separate root canals in this tooth is quite rare and taurodontism with three separate canals has never been reported in literature so far. The use of cone-beam computed tomography scan in this rare case greatly contributed to making a confirmatory diagnosis and successful nonsurgical endodontic management thereafter.

Replantation of an Avulsed Maxillary Incisor after 12 Hours: Three-Year Follow-Up

Tooth avulsion is defined as the complete displacement of the tooth out of its alveolar socket. The treatment of choice is immediate replantation or if that is not possible, placement of the tooth in an appropriate storage media. This report presents replantation of an avulsed maxillary central incisor after 12 hours of storage in milk. The tooth was replanted and splinted. One week later, it was treated endodontically and calcium hydroxide dressing was placed for 1 month; subsequently, the tooth was obturated with gutta-percha. During three years of follow-up, no evidence of ankylosis or inflammatory resorption was observed. After three years, the tooth was stable and remained functional and esthetically acceptable.

This case report presents an uncommon case of maxillary molar with two palatal root canals and an enamel pearl in the furcation area. The article discusses root canal complexities of maxillary second molars as well as possibility of coexisting anomalies in the region that makes radiographic interpretation difficult and compromises the success of endodontic treatment.