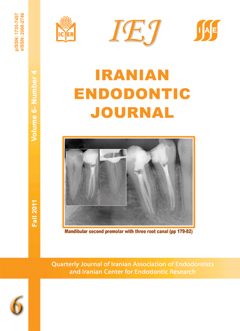 INTRODUCTION: The purpose of this study was to compare the inhibitory effect of bovine serum albumin (BSA) and hydroxyapatite (HA) on the antibacterial activity of white-colored MTA (WMTA) against Staphylococcus (S.) aureus and Streptococcus (S.) mutans after 24 and 72 hours.

MATERIALS & METHODS: All materials were prepared according to the manufacturer’s directions immediately before testing. The antibacterial effect of each group (WMTA, WMTA+BSA and WMTA+HA) was determined by measuring the diameter of zone of inhibition in millimeters after incubation at 37°C for 24 and 72 hours in a humid atmosphere. Each test was repeated three times. Data were analyzed using ANOVA and Tukey’s test.

CONCLUSION: The products studied exhibited antibacterial activity. However, in both time intervals, the MTA+HA group exerted the greatest activity against S. mutans and S. aureus.

INTRODUCTION: Favorable apical seal of root filling materials is a crucial factor for a successful root canal treatment. The aim of this in vitro study was to compare bacterial and dye microleakage of two root canal filling materials including standard gutta-percha and nanosilver coated gutta-percha, and to evaluate the agreement between results of these two methods.

MATERIALS & METHODS: Fifty-eight extracted single-rooted teeth were randomly divided into two experimental groups of 26 each, and two control groups of three each. After decoronation, root canals were instrumented by crown-down technique. Obturation was conducted using standard gutta-percha in one of experimental groups and nanosilver-coated gutta-percha in another group. AH26 sealer was used as the sealer in both experimental groups. Bacterial leakage was investigated after 60 days using Enterococcus (E.) faecalis microbial strains, and dye leakage was assessed during 72 hours using 1% methylene blue. The data were statistically analyzed by Chi-square test, Kaplan-Meier survival analysis, and Cohen’s Kappa.

CONCLUSION: There was a poor agreement between dye and bacterial leakage methods. Leakage results produced by nanosilver gutta-percha were comparable to those by standard gutta-percha. Considering the antibacterial effects of nanosilver coated gutta-percha, use of this type of gutta-percha might be more efficacious in endodontic treatments.

INTRODUCTION: Intrinsic tooth discolorations after endodontic treatment are principally attributed to the composition of necrotic pulp tissue, hemorrhage within the pulp cavity, endodontic medicaments and/or filling materials. Residual sealer left in pulp chamber after obturation can cause discoloration. The objective of this in vitro study was to evaluate coronal discoloration created by AH26 and ZOE sealers after four months.

MATERIALS & METHODS: Fifty intact human extracted maxillary central incisors were employed. Access cavities were prepared in all samples and root canals were instrumented; coronal orifices were then sealed using self-cure glass ionomer. The teeth were divided into two experimental groups (n=20) according to utilized sealer in pulp chambers including AH26 and Dorifill (ZOE). The remaining 10 teeth served as negative and positive controls (n=5). The access cavities were sealed with self-cure glass ionomer. Teeth were kept in incubator for four month. Preliminary digital images of the teeth were taken and then compared with those related to 4-month follow-up. The images were assessed using Photoshop software. Data was analyzed using paired t-test and independent samples t-test.

RESULTS: The teeth which were filled with AH26 sealer showed significantly greater discoloration than those filled with ZOE sealer (Dorifill) (P < 0.05).

CONCLUSION: AH26 sealer causes greater discoloration of the crown compared to ZOE sealer. Despite the other disadvantage of AH26 sealer, it seems that Dorifill is more esthetically considerate.

INTRODUCTION: Root canal preparation is an important process in endodontic therapy. Nickel-titanium (NiTi) rotary file system can be used in single length technique (simultaneous technique) without early coronal enlargement, as well as in crown-down method. The purpose of this in vitro study was to compare single length with crown-down methods’ shaping ability using Mtwo NiTi files.

MATERIALS & METHODS: Fifteen acrylic-resin blocks containing simulated canals were divided into two experimental groups. In group A, single length technique was used and in group B root canals were prepared by crown-down technique. Pre- and post-preparation canals were photographed in a standardized manner and were superimposed. The inner and outer walls of canal curvature were evaluated at three points (apical, middle and coronal) to determine the greatest change. The data was statistically analyzed using the Student t-test by Statistical Analysis System (SAS) software.

RESULTS: Statistical analysis revealed that in group B, dentine was equally removed within the canal coronal to the curvature, whereas in group A, the inner wall was predominantly removed (P < 0.01). The two groups had no significant difference at the apical and middle points of the canal curvature.

CONCLUSION: Our in vitro study revealed no significant difference between the single length method and crown-down technique using Mtwo for preparation of apical and middle portion of canal curvature.

INTRODUCTION: The purpose of this in vitro study was to evaluate the sealing ability of the readymade temporary filling and hand mixed materials by assessing coronal microleakage.

MATERIALS & METHODS: Standardized access cavities were prepared in 80 intact human permanent premolar teeth. They were divided randomly into four experimental groups (n=20). The teeth were restored using one of the temporary materials including Cavisol, Litrak, Zinc phosphate cement, Zinconol (IRM). Thermocycling was applied on the specimens. Methylene blue dye was applied and penetration was evaluated under stereomicroscope. Grading of the microleakage pattern was from 1 to 3, with 3 providing the best seal. Results were analyzed using one-way ANOVA test (P < 0.05).

RESULTS: Microleakage of Cavisol and Litrak samples achieved grade 3; whereas zinc phosphate cement and Zinconol samples absorbed the dye into the bulk of the materials. Cavisol was found to exhibit the best seal amongst the four tested materials followed by Litrak, zinc phosphate cement, and Zinconol. There was a statistically significant difference in the microleakage scores obtained between the materials (P < 0.01).

CONCLUSION: Among the four materials tested, readymade temporary filling provided the best sealing ability over hand-mixed. This study emphasizes the importance of correct placement and sufficient thickness of temporary filling materials in endodontic access cavities to ensure a tight seal.

Evaluation of the doxycycline release from AH26 sealer-doxycycline combination: An ex vivo study

INTRODUCTION: The purpose of this ex vivo study was to determine the releasing characteristics and doxycycline dentinal diffusion of AH26 sealer-doxycycline combination from apical 3mm of tooth root and apical foramen.

MATERIALS & METHODS: One-hundred and two recently extracted single-rooted human teeth were decoronated and prepared with #3 and #4 Gates-Glidden drills and rotary Mtwo files. Smear layer was removed; all surfaces except for apical 3mm of each root were sealed with two coats of nail polish. To quantify the release and diffusion of the doxycycline at different time intervals (30 min, 48 and 72 h) after root canal obturation, the samples were randomly divided into three groups (n=30; 0.5 h, 48 h, 72 h). To evaluate the release of doxycycline from AH26 sealer-doxycycline combination at six concentrations of antibiotic including 0.5%, 1%, 2%, 5%, 10% and 20%; each experimental group was divided into six equal subgroups (n=5). Root canals were filled with gutta-percha and AH26-doxycycline combinations and then were placed in vials containing 1.25mL of phosphate buffer saline solution (PBS). After 30 min, 48 and 72 h, the amount of doxycycline released from specimens into PBS were determined by measuring the absorbance values using UV spectrophotometry at λmax=350 nm. Data were analyzed using two-way ANOVA.

CONCLUSION: Under the conditions of this ex vivo study, doxycycline can be released from AH26 sealer-antibiotic combination through 3mm of apical root and apical foramen at 30 min, 48 and 72 h after mixing the sealer with doxycycline at concentrations of 0.5% up to 20%.

INTRODUCTION: The aim of this study was to assess the extent of adoption, application and the associated issues with the nickel-titanium (NiTi) rotary instruments and techniques amongst endodontists and general dentists in Tehran.

MATERIALS & METHODS: A total of 33 questions classified in six categories of demographics, frequency rate of NiTi rotary instrumentation and information. The sample size comprised of 100 endodontists and 100 general dental practitioners in Tehran.

RESULTS: The overall response rate was 73.5%. NiTi rotary instruments were used by 98.4% and 50.6% of endodontists and general dentists, respectively. The main mentioned reason for not using rotary NiTi instruments was "lack of education". Among all procedural faults with NiTi, the most prevalent was “intra-canal file fracture” (88.5%) followed by "apical transportation" (71.2%) and "ledging" (68.3%). The main factors associated with the first procedural accident were "over-use" and “excessive pressure”.

ABSTRACT: Before initiating any endodontic therapy, probability of extra canals should be considered. The Incidence of three canals in mandibular second premolar has been reported to be 0.46-0.5%. The present report describes nonsurgical endodontic treatment of three mandibular second premolars with three canals. In these cases, three orifices were located in mesiobuccal, distobuccal and lingual. Mesiobuccal orifices were found after removing dentinal shelves. Even in teeth with extremely complex root canal morphologies, conventional endodontic treatment without surgical intervention can result in adequate healing, as in these cases. Clinicians should be aware of unusual root canal anatomy in mandibular premolars. Very careful examination of the pulpal space, preferably with an optical device is recommended to locate any unusual orifices.

Management of a crown-root fracture in central incisors with 180° rotation: A case report

ABSTRACT: The crown-root fracture is a common tooth injury which compromises the biological width and need proper endodontic and prosthodontic treatment to achieve acceptable clinical outcome. This case report describes clinical management of crown-root fracture in maxillary central incisors which was successfully treated by forceps eruption with 180˚ rotation to restore the biological width. The patient was followed-up for 18 months. Clinical and radiographic evaluation showed acceptable results, the replanted teeth have normal function and no obvious inflammatory root resorption was seen on radiographic examination.