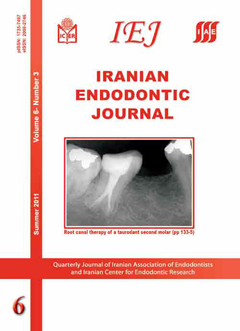 MATERIALS & METHODS: The root canals of 50 extracted maxillary permanent incisors were prepared and filled with gutta-percha and sealer. The teeth were then randomly divided into two groups of 25 incisors. The teeth were then imaged using the paralleling technique with E-speed film and digital/digital zoomed system. The accuracy of radiographic techniques was evaluated for detecting voids by three independent observers. Presence/absence of voids was recorded and compared with the baseline data. The sensitivity, specificity, accuracy and positive and negative predictive values was recorded.

CONCLUSION: Digital and digital zoomed images performed better than conventional radiographs in detecting voids, but there were no differences between the performances of both digital images.

Introduction: Root canal treatment is based on elimination of intraradicular microorganisms. Calcium hydroxide Ca(OH)2 is the most widely used material for canal dressing, However, Enterococcus faecalis has been reported to be resistant bacteria in persistent apical periodontitis . The purpose of this study was to evaluate the efficacy of Ca(OH)2 on the elimination of intraluminal and intratubular E. faecalis. Materials and methods: 36 human unirooted teeth contaminated with E. faecalis. 30 Specimens in experimental group which were treated with 10% Ca(OH)2, or sterile water as a positive control (n=6). Specimens from each experimentagroup were randomly divided into 2 equal subgroups: A (n=15) had specimens incubated and sampled at 1 day; and B (n=15) had specimens incubated and sampled at 7 days. For each group, paper points were used to obtain the intraluminal E. faecalis and Gates Glidden burs to obtain intratubular bacteria either after one day or one week. Samples obtained from these root canal preparations were analyzed for bacterial load by counting the number of colony forming units (CFUs). Results: A significant decrease in the number of CFUs was observed after dressing with Ca(OH)2 after 1 week camper to 1 day either in sampling with paper point or Gates Glidden. Additionally, no differences were observed between the antimicrobial properties of Ca(OH)2 on intraluminal and intratubular E. faecalis. Conclusion: significantly higher antimicrobial efficacy are measured by the number of CFUs after Ca(OH)2 medication after 1 week. Ca(OH)2 showed the same antimicrobial efficacy on intraluminal and intratubular E. faecalis.

INTRODUCTION: The purpose of this study was to investigate root surface pH changes over a period of 4 weeks following treatment with calcium-hydroxide dressing of intact and resorbed roots.

MATERIALS & METHODS: The canals of 30 single-rooted teeth were instrumented with ProTaper rotary files and randomly divided into 2 experimental groups of 14 each, and one control group with two samples. To simulate external resorption in group 2 and control, two defects were made on the buccal and lingual mid-root surfaces of each tooth with a diamond bur (1×1mm). Teeth were then submerged in 20% sulfuric acid for 4 days. Canals of 14 intact teeth in group 1, and 14 resorbed teeth in group 2 were filled with calcium hydroxide Ca(OH)2 while canals of resorbed teeth in control group were filled with saline. All teeth were then placed in a glass vial containing 15mL of deionized water (pH≈7). The pH of water was measured at 0 and 1, 4, 7, 10, 14, 21 and 28 days using pH microelectrode. Independent t-test and repeated measured ANOVA analyzed the data.

RESULTS: Except a mild decline at 7days and 14days, the average pH values showed increased during the time periods of this study. Day 28 showed the maximum pH average value in both groups (7.67-7.72) (P<0.05). Significant increase of pH values were detected at different time intervals compared with the baseline time (P<0.05).

CONCLUSION: Diffusion of hydroxyl ions was similar in both resorbed and intact roots. In both groups pH values were significantly higher than the baseline pH at the various times.

INTRODUCTION: The materials used for root-end filling and perforation repair are in direct contact with live tissues e.g. bone and connective tissue; their effects however, are uncertain. The aim of this ex vivo study was to evaluate the osteoblastic secretory activity adjacent to gray and white mineral trioxide aggregate (MTA) and Intermediate Restorative Material (IRM).

MATERIALS & METHODS: The studied materials were prepared and placed in 24-wells plate. Human MG-63 osteoblasts were introduced to materials after their initial set. The supernatant fluid was collected after 1, 3, and 7 days and the level of interleukin-1b was measured by ELISA test. A microscopic exam was also performed to assess proliferation and viability of the cells. Kruskal-Wallis and Tukey tests were used for analysis.

RESULTS: There were significant higher levels of interleukin-1b in the gray and white MTA groups compared to IRM group (P<0.05). The difference in interleukin-1b secretion level between two mineral trioxide aggregate groups was not significant (P>0.05). Morphologic appearance of osteoblasts adjacent to gray and white MTA was similar to normal osteoblasts in all observation periods, however cells adjacent to IRM were round, signifying cytotoxicity of the adjacent material.

INTRODUCTION: Bacterial infection of tooth pulp can progress into periapical diseases. Root canal treatment has been established as the best treatment. In cases of failure, nonsurgical retreatment of teeth is preferred to surgical procedure and extraction.

MATERIALS & METHODS: In this historical cohort study, 104 permanent teeth with apical lesion were treated during 2002-2008. All teeth showed radiographic evidence of periapical lesion varying in size from 1 to >10mm. A total of 55 teeth were treated with initial root canal treatment and 49 teeth required retreatment. Patients were recalled up to ≈7 years. All radiographs were taken by RSV MAC digital imaging set and long cone technique. The presence/absence of signs and symptoms and periapical index scores (PAI) were used for measuring outcome. Teeth were classified as healed (clinical/radiographic absence of signs and symptoms) or diseased (clinical/radiographic presence of signs and symptoms). The data were statistically analyzed using student t-test and Pearson chi-square or fisher’s exact test.

RESULTS: The rate of complete healing for teeth with initial treatment was 89.7%, and for retreatment group was 85.7%; there was no significant difference. Size of lesions did not significantly affect the treatment outcomes. Success of tooth treatment did not reveal significant correlation with gender and number of roots.

INTRODUCTION: The aim of this in vitro study was to compare the effect of hand and rotary instruments on fracture strength of tooth roots.

MATERIALS & METHODS: Thirty two teeth were randomly divided into two experimental groups of 15 each and one negative control group with two samples. In group 1, step-back technique with conventional stainless steel K-files was used, and in group 2, instrumentation was performed using rotary Ni-Ti Hero642. Samples in control group did not received cleaning or shaping after access cavity preparation. After obturating each canal, tip of the spreader was locked within canal. The required force for root fracture was measured using Instron testing machine. Recorded data was statistically analyzed using t-test.

RESULTS: The mean and standard deviation force required for vertical root fracture were 50.33±19.1 and 63.1±25.46 N for hand and rotary groups respectively. However, no significant difference was found between experimental groups.

CONCLUSION: The results indicate that the manual technique did not lower fracture strength of obturated roots in comparison with the rotary preparation technique.

ABSTRACT: Dens invagination (DI) is a developmental abnormality of teeth which frequently results in a complex internal anatomy of the root canal system. DI type 3 is an anomaly characterized by infolding of enamel and dentin extending into the root apex. This may present difficulties when forming a diagnosis and treatment plan. Many treatment modalities have been presented in case reports for DI type 3, but there is insufficient evidence to recommend a therapy. This case report presents the successful non surgical root canal treatment of a maxillary canine with an open apex DI type 3, necrotic pulp, and an associated large periradicular lesion.

ABSTRACT: A 28-year old patient was referred for endodontic treatment of his left mandibular second molar. The patient had no history of systemic diseases and his chief complaint was spontaneous pain in left posterior region of mandible. Clinically, there was a deep caries in the left mandibular second molar. Radiographic examination of this tooth revealed a long crown containing large pulp chamber and two short roots with a apically located furcation, indicating hypertaurodontism. After coronal access preparation, five orifices were found including mesiolingual, mesiobuccal, distobuccal, mid-distal and distolingual. Subsequent to root canal preparation, a modified filling technique was used for canal obturation. After one year the treated tooth was symptom free