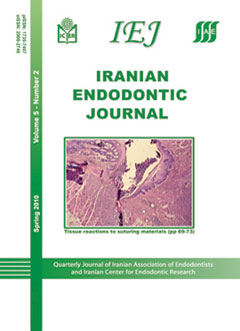 INTRODUCTION: Enterococcus (E) faecalis bacteria adhere to dentine of teeth root canals to form the biofilm. E. faecalis has been shown to be resistant to antibiotics. This in vitro study aimed to investigate the efficacy of vancomycin and doxycycline in inhibiting E. faecalis biofilm formation. MATERIALS AND METHODS: A total of 60 extracted human teeth were incubated with E. faecalis (ATCC 35550 strain) for 45 days to allow biofilm formation. The teeth were equally divided into six groups (n=10): 1) positive control, 2) negative control, 3) doxycycline alone 4) doxycycline with filing, 5) vancomycin alone, 6) vancomycin with filing. The relevant canals were irrigated with 4µg/mL of either vancomycin or doxycycline antibiotic. Teeth were processed for scanning electron microscopy (SEM). Areas of biofilm remaining in the canals after antibiotic treatment were measured with Scion image analysis software using the SEM images. RESULTS: Vancomycin is more effective in reducing the overall biofilm area compared with doxycycline; moreover filing after antibiotic administration increased this effect. CONCLUSION: We can conclude that vancomycin had greater efficacy than doxycycline for inhibiting and reducing E. faecalis biofilms growth in root canals.  However, it failed to completely eliminate biofilm formation.

INTRODUCTION: The purpose of this in vitro study was to compare the coronal seal of four temporary filling materials, Coltosol, Zonalin, Zamherir, and Intermediate Restorative Material (IRM) by the India ink dye penetration test. MATERIALS AND METHODS: Endodontic access preparations were prepared in 120 extracted intact human premolars. The teeth were randomly divided into six groups including four experimental and two control groups. The access cavities in each group were sealed with Coltosol, Zonalin, Zamherir, and IRM; subsequently thermocycling was applied for 5-55˚C for 150 cycles. The teeth were immersed in 10% India ink for 72 hours to assess leakage. The teeth were then rinsed, dried, and sectioned mesiodistally and evaluated under a stereomicroscope for dye penetration. Data were analyzed using one-way ANOVA and post hoc Tukey tests. RESULTS: Positive control specimens showed complete dye penetration, while negative controls had no penetration. In the experimental groups, the lowest and highest leakage scores were observed in the Zonalin and Coltosol groups, respectively (P<0.05). There were no statistically significant differences in marginal leakage between Zonalin-Zamherir and Coltosol-IRM groups. CONCLUSION: These results suggest that Zonalin and Zamherir have a superior seal and less micro-leakage into the canals compared to the two other materials.

INTRODUCTION: The aim of this study was to compare the effect of post space preparation with Gates Glidden drills or hand files on the sealing ability of gutta-percha or Resilon obturation materials. MATERIALS AND METHODS: One-hundred and four single-rooted human teeth were instrumented and divided into four experimental groups (n=21 each) and two groups of positive and negative control (n=10). Forty-two roots of experimental groups were obturated with gutta-percha and Dorifill sealer; and 42 roots with Resilon/Epiphany self-etch using lateral compaction technique. Each gutta-percha or Resilon group was divided into two subgroups (n=21) and post-space prepared with either Gates Glidden drills or hand files and chloroform. After post space preparation, 5 mm of apical gutta-percha or Resilon was left intact. The whole system was sterilized with gamma-rays. Saliva leakage was tested using a split-chamber model. Specimens were monitored every 24 hours for 30 days. The data were analyzed using log-rank test and Cox regression analysis. RESULTS: There were no significant differences between the sealing ability of gutta-percha and Resilon. Furthermore, no significant difference was found between two different methods of post space preparation (P>0.05). CONCLUSION: Under the limitations of this ex vivo study, there were no significant differences between the sealing ability of Resilon and gutta-percha after post space preparation using Gates Glidden drills or hand files with the aid of chloroform.

INTRODUCTION: The purpose of this study was to compare the histopathologic reaction of four suturing materials: silk, polyvinylidene fluoride (PVDF), polyglycolic acid, and catgut in the oral mucosa of albino rabbits. MATERIALS AND METHODS: The twenty-one male mature albino rabbits which were used in this study were randomly divided into three groups of seven each. Silk, PVDF, polyglycolic acid and catgut suture materials were tested in the oral mucosa of these animals. The animals were sacrificed 2, 4, and 7 days after suturing. Two pathologists evaluated the samples by determining the presence and level of inflammation, granulation tissue, and fibrosis formation. Data were statistically analyzed by Kruskal Wallis and Mann-Whitney U tests. RESULTS: Histological features of the samples showed that PVDF and plain catgut suture materials produced more fibrous tissue (favorable response) on the fourth day in comparison with silk suture (P=0.02). Also, in the 7-day samples PVDF sutures produced the mildest inflammation when compared with the silk sutures (P=0.015). CONCLUSION: According to the results of this study, it can be convey that PVDF suture materials created mild tissue reactions and can be a reasonable candidate for suturing oral tissues.

INTRODUCTION: This cross-sectional survey determined the dental prevalence of apical periodontitis (AP) in selected Iranian population, and evaluated the influence of the quality of root canal treatment (RCT) and their coronal restorations (CR) on the periapical status. MATERIALS AND METHODS: A total of 1064 panoramic radiographies were evaluated by two observers during 2009. The quality of RCT i.e. length/density of root fillings and CR in addition to periapical status of endodontically treated teeth were recorded. Their interrelationship was analyzed by Chi-squared, logistic regression and Spearman's rho statistics. Hosmer and Lemeshow tests were used for assessing fitness of logistic regression model and one sample k-s test was used for evaluating of normality of the data. RESULTS: Our results showed that 527 teeth (52%) of the endodontically treated teeth presented with AP radiographically. The percentages of teeth which fulfilled the criteria of an acceptable RCT or CR radiographically were 42.3 and 62.5 respectively. Incidence of AP among teeth with acceptable RCT (29.1%) was significantly lower than those suffering from unacceptable RCT (68.8%) (P<0.001). Moreover, adequate CR demonstrated a significantly better periapical status (58.6%) compared to teeth with inadequate CR (30.3%) (P<0.001). The incidence of AP ranged from 25.6% (good qualities) to 79.5% (bad qualities) (P<0.001). Cases with both unacceptable RCT/CR were 11 times more likely to have AP than cases with acceptable RCT/CR. The quality of RCT and CR were found to impact the periapical health of endodontically treated teeth.CONCLUSION: There are a significant high number of technically unacceptable endodontic and restorative treatments in Iran; therefore considerable efforts are needed to improve the standards of endodontic and restorative treatments.

INTRODUCTION: Root canal obturation seals the root canal system to prevent re-entry and/or growth of microorganisms. The provision of an appropriate restoration to coronally seal the access cavity affects the success of endodontic treatment. The purpose of this study was to evaluate the coronal microbial leakage in root canals that were either filled by lateral compaction, GuttaFlow or warm vertical compaction. MATERIALS AND METHODS: In this ex vivo study, 80 single-rooted human extracted teeth were randomly divided into three experimental groups (n=20) and two positive and negative control groups (n=10). The teeth in experimental groups were obturated with cold lateral compaction, GuttaFlow system or warm vertical compaction techniques. After sterilization of the whole system with gamma-ray, saliva leakage was tested using a split-chamber model. Specimens were monitored every 24 hours for 30 days. The data were analyzed using log-rank and Kaplan-Meier survival analysis tests. RESULTS: There were no significant differences in impeding saliva leakage between the three experimental groups (P>0.05). CONCLUSION: Under the conditions of this ex vivo study, it can be concluded that the sealing ability of cold lateral compaction, warm vertical compaction and GuttaFlow system was comparable.

INTRODUCTION: This study aimed to compare the thickness of the mesiobuccal furcal canal walls of first and second maxillary molars. MATERIALS AND METHODS: This study was performed on total of 30 first and second extracted molar teeth (15 each). The mesiobuccal roots of each tooth were separated at the cement-enamel junction (CEJ) level and embedded in acrylic resin. The embedded roots were cut horizontally at two and four mm below the CEJ using a 0.20 mm blade (overall three sections CEJ, two and four mm below). Next, photographs of all the horizontal sections were taken using a digital stereomicroscope with identical magnifications (×20). Using the photographs, two independent observers measured and recorded the minimal thickness from the canal wall of the first mesiobuccal (MB1) and the second mesiobuccal (MB2) canals to the furcation area. Data analysis was performed by repeating the measurement Analysis of Variance. The analysis was completed by making paired comparisons using the Bonferroni alpha adjustment method. Statistical significance was set at P<0.05. RESULTS: In maxillary first molars, the mean (±SD) thickness of the canal furcal wall MB1 in three sections were significantly higher than thickness of the canal furcal wall in MB2 (P<0.05). However there was no statistical difference between the mean (±SD) thickness of the canal furcal wall in the three sections (CEJ, 2 and 4 mm below) of maxillary second molars MB1 and MB2 canals. CONCLUSION: Only the maxillary first molars demonstrated significantly lower furcal canal wall thickness (FCWT) values in the MB2 canals. Maxillary second molars MB canals did not demonstrate statistical difference in FCWT values.

Biological Apexogenesis of Undeveloped Tooth in a Patient with Spondyloepiphyseal Dysplasia: A Case Report

This case report describes treatment of a necrotic immature permanent mandibular first molar with pulpal necrosis in 9-year old female with spondyloepiphyseal dysplasia. The coronal half of the root canal was debrided with a file #30 to remove necrotic tissue, and irrigated with chlorhexidine 0.12%. Bleeding was evoked to form an intracanal blood clot; the wound was then dressed with calcium hydroxide medication and provisionally restored with GIC. This was repeated at intervals of 1, 3 and 6 months. After six months, radiographic evidence revealed thickening of dentinal walls and apical closure. The progressive increase in dentinal wall thickness and apical development suggests that desirable biologic responses can occur with this form of treatment for the necrotic open apex of immature permanent teeth.