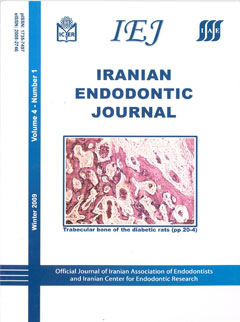 According to the IEJ editorial board decision, article abstracts of the members of “Iranian Association of Endodontists” which are accessible in Medline journals will be published in the winter publication of each IEJ volume (in alphabetical order)

INTRODUCTION: Coronal microleakage may significantly reduce the prognosis of endodontic treatment. Temporary restorative materials have a crucial role in preventing the infection of root canals between and after endodontic treatment. This in vitro study was designed to evaluate the coronal microleakage of three temporary restorative materials used in endodontics: Coltosol, Cavisol and Cina. MATERIALS AND METHODS: Seventy-five human premolars and molars were selected for this in vitro study. Access cavities were prepared and amalgam placed on the orifices of canals; the occlusal surfaces were then reduced by 4mm for the temporary restoration. The teeth were divided into three experimental groups of 23 teeth and two control groups of 3 teeth. The access cavities in each group were sealed using one of the test materials and thermal cycling was applied (5-55ºC for 150 cycles). Surfaces were then covered with nail polish and wax; the teeth were immersed in 2% methylene blue dye for 7 days. The teeth were rinsed, dried, and sectioned mesiodistally and evaluated under a stereomicroscope for microleakage. Data was analyzed using Kruskal-Wallis and Mann U Whitney tests. RESULTS: The lowest microleakage value was observed in Cavisol and Coltosol groups and the highest in Cina group (P<0.001). There was no statistical difference between Cavisol and Coltosol. CONCLUSION: Coltosol and Cavisol have appropriate sealing properties as temporary restorations, but the sealing ability of Cina was questionable.

INTRODUCTION: To assess the antibacterial effects of an Iranian endemic essential oil, Satureja Khuzistanica Jamzad (SKJ) when used as an intracanal antiseptic and interappointment medicament. MATERIALS AND METHODS: Antimicrobial activity and minimum inhibition concentrations (MICs) of SKJ essential oil with and without calcium hydroxide (CH) against eleven aerobic, microaerophilic and anaerobic bacteria were assessed. The evaluation was carried out by agar dilution and well diffusion methods. The results were measured and recorded by an independent observer. Data were analyzed statistically using student t-test. RESULTS: The MIC for eight species was recorded in 0.31 mg/mL of essential oil. Pseudomonas aeruginosa with a MIC value of 1.25 mg/mL appeared to be the most resistant bacterium; while only 0.16 mg/mL of essential oil was sufficient to inhibit the growth of Bacillus subtilis and Staphylococcus aureus. The inhibition zone of the antiseptic oil (at 0.31 mg/mL) with E. faecalis in the well diffusion method was 13 mm; this was comparable with 12.5 mm inhibition zone value of the tetracycline disc (30 µg). No synergistic effect was found in combination of essential oil and CH powder. CONCLUSION: SKJ essential oil with the concentration of 0.31 mg/mL is effective against most of oral pathogens including E. faecalis.

INTRODUCTION: Proper apical seal and obturation density are essential to long-term success of root canal therapy (RCT). The apical seal and density of lateral compaction techniques using stainless-steel and nickel-titanium spreaders and vertical compaction with BeeFill device were compared in this in vitro study. MATERIALS AND METHODS: A total of 66 extracted maxillary central incisors were instrumented. The volume of each canal was determined after preparation. The weight of each root was measured before and after obturation. Lateral compaction technique was performed using stainless-steel (groups a) and nickel-titanium spreaders (groups b), filled with AH26 sealer (groups 1a and 1b) and without sealer (groups 2a and 2b). Canals in vertical compaction technique (groups c) were filled with (group 1c) and without (group 2c) sealer using Beefill system. Density was determined as the ratio of weight/volume. Sealing ability was evaluated using dye penetration method. Data was analyzed with ANOVA and T-test. RESULTS: T-test results showed a significant difference between groups which were filled with/without sealer for their apical sealing ability (P<0.001), however there was no significant difference in obturation density (P=0.397). ANOVA test showed that there was a significant difference in apical sealing ability among the different experimental groups (P<0.001), while there was no significant difference in density (P=0.456) of obturation. The mean dye leakage for groups using sealer was significantly different to those obturated without sealer. The sealing ability of obturation techniques using sealers were significantly more than those without sealers. CONCLUSION: Under the condition of this in vitro study, density and apical sealing ability of these three obturation methods had no difference. However, the quality of apical seal has improved using AH26 sealer.

Coronal and apical sealing ability of a new endodontic cement

INTRODUCTION: This in vitro study aims to evaluate the coronal and apical sealing ability of gutta-percha (GP) root filling used with either mineral trioxide aggregate (MTA), new endodontic cement (NEC) or AH26 as filler/sealers. MATERIALS AND METHODS: Forty eight single-rooted extracted teeth were selected, decoronated and then instrumented. Samples were randomly divided into three experimental (n=12) and two control groups (n=6). In group 1, root canals were filled using lateral condensation technique (L); while single cone technique (S) was used for groups 2 and 3. AH26, MTA and NEC were the root canal sealer/fillers in groups 1, 2 and 3, respectively. Samples were immersed in 1% methylene-blue dye and then independently centrifuged apically and coronally. The roots were split longitudinally and linear extent of dye penetration was measured with a stereomicroscope from apical and coronal directions. Data were analyzed using One-way ANOVA and T-test. RESULTS: No statistical differences in mean apical dye penetration between groups LGP/AH26, SGP/MTA and SGP/NEC were found; SGP/NEC group showed significantly less coronal dye penetration (P<0.001). CONCLUSION: Considering the limitations of this in vitro study, it was concluded that the simple single cone technique with NEC can provide favorable coronal and apical seal.

INTRODUCTION: The aim of this in vivo study was to determine the effect of demineralized bone matrix (DBM) on alveolar bone repair in type I diabetic rats. MATERIALS AND METHODS: This study was carried out on 40 adult (8 weeks-old) albino rats with an average weight of 200-250 grams. The animals were divided into four groups (n=10) as follows: group 1 nondiabetic rats, group 2, 3 and 4 were diabetic rats; group 4 rats took one unit of insulin daily.  Diabetes was induced by Alloxan Monohydrate through the tail veins of the rats in groups 2-4. Only group 4 received insulin NPH 1 unit daily. After 10 days, the upper right incisors of all samples were extracted and the socket was filled with DBM in groups 3 and 4. The animals were sacrificed at the end of week 1 and 2. The specimens were prepared and stained with H&E. RESULTS: Histological results of group 4 displayed osteoblastic activity and bone formation with collagen fibers at the end of the first week and thick bone trabeculae formation in vicinity of DBM at the end of second week. In group 3, DBM showed some osteoinductivity at the end of the first week, but in some regions DBM particles were degraded by osteoclastic activity. Bone trabeculae formed with a dispersed and separate pattern at the end of second week. In group 2 hematoma and inflammation were dominant histological features at the end of first and second weeks; poor bone formation was detected in these two groups (2 and 3). In group 1, the results were as expected. CONCLUSION: It seems demineralized bone matrix simulate osteoblastic activity.

INTRODUCTION: The purpose of this study was to compare the histocompatibility of white (WMTA) and gray (GMTA) mineral trioxide aggregate mixed with 0.12% chlorhexidine (CHX) and distilled water (DW) in subcutaneous connective tissues of rats. MATERIALS AND METHODS: The freshly mixed WMTA and GMTA with CHX or DW were inserted in polyethylene tubes and implanted into dorsal subcutaneous connective tissue of 50 Wistar Albino rats; tissue biopsies were collected and were then examined histologically 7, 15, 30, 60 and 90 days after the implantation procedure. The histology results were scored from 1-4; score 4 was considered as the worst finding. Data were analyzed using one-way ANOVA tests. RESULTS: All experimented materials were tolerated well by the connective tissues after 90-day evaluation, except for the WMTA/CHX group that had significantly more mean inflammatory scores (P<0.001). There was a statistically significant difference in the mean inflammation grades between experimental groups in each interval (P<0.001). After 90 days, GMTA/CHX group had the lowest inflammatory score. CONCLUSION: Although adding CHX to WMTA produces significantly higher inflammatory response, it seems a suitable substitute for DW in combination with GMTA. Further research is necessary to recommend this mixture for clinical use.

INTRODUCTION: Endodontic sealers are in direct contact with periradicular tissues and play a critical role in regeneration and pathogenesis of periradicular diseases. The aim of this study was to compare cytotoxicity of four different types of sealers including AH plus, Sankin, Tubliseal EWT and Apexit as well as their effect on cytokine release of L929 fibroblasts. MATERIALS AND METHODS: In this experimental study, cells were cultured in Complete Medium Culture (CMC) and then divided into two test groups. In group 1, sealers were added to cell culture wells immediately after mixing. In group 2, sealers were added to cell cultures 3 hours after mixing. Cell viability was evaluated by MTT assay after 4, 24 and 168 hours. The amount of Interleukin-6 (IL-6) released in response to the sealers was also evaluated by ELISA technique on fibroblasts after 24 hour period. Data were analyzed using Kruskal-Wallis and Mann Whitey-U tests. RESULTS: Significant differences were seen in cytotoxicity in both groups (P<0.001). The least cytotoxic sealers were AH Plus and Sankin respectively, whereas Tubliseal EWT showed the greatest cytotoxicity. Production of IL-6 was significantly different among studied groups (P<0.001). The highest IL-6 level was observed in Tubliseal EWT and Sankin groups; which was statistically significant (P<0.001). CONCLUSION: AH plus has less cytotoxicity and induces less IL-6 release. Tubliseal EWT has greater cytotoxicity and induces more IL-6 release than other sealers. This should be considered during their routine use in root canal treatments.