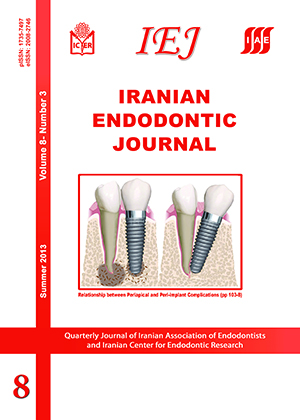 The Prophylactic Effects of Zintoma and Ibuprofen on Post-endodontic Pain of Molars with Irreversible Pulpitis: A Randomized Clinical Trial

Introduction: Post endodontic pain is often linked to the inflammatory process as well as additional central mechanisms. The purpose of the present double-blind randomized clinical trial study was to compare the prophylactic effects of a derivative of Zingiber Officinale, Zintoma, and Ibuprofen on post endodontic pain of molars with irreversible pulpitis. Materials and Methods: The post endodontic pain of 72 enrolled patients suffering from irreversible pulpitis was assessed after prophylactic use of 400 mg Ibuprofen, 2 gr Zintoma and placebo. Using the Heft-Parker Visual Analogue Scale, the patients recorded their perceived pain before taking the medicament (baseline), immediately after and also at 4, 8, 12, 24, 48, and 72 h post one-visit endodontic treatment. The statistical analysis was done using Kruskal-Wallis, Mann-Whitney, and Freedman tests (P<0.05). Results: At all times, there was significant difference between the Ibuprofen and Zintoma (P<0.05) and also between the Ibuprofen and placebo (P<0.05). However, there was no significant difference between Zintoma and the placebo in any of time intervals (P>0.05). No side effects were observed. Conclusion: The obtained results of the trial revealed that prophylactic use of 2 gr Zintoma is not an effective pain relieving agent.
Keywords: