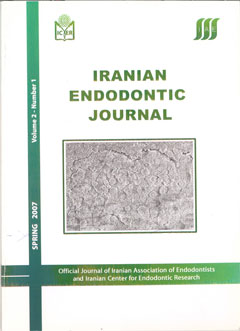 INTRODUCTION: The purpose of this in-vitro study was to investigate the influence of the remaining calcium hydroxide (CH) as an intracanal dressing on the apical sealing ability of three endodontic sealers. MATERIALS AND METHODS: Sixty-six single and straight canals of recently extracted human permanent maxillary central incisors were used. All canals were prepared and sixty of them were randomly divided into two groups with (group 1) and without (group 2) CH medication. Each of these groups was divided into three experimental groups using AH26 (group a), Dorifill (group b), and Apexit (group c). Six remained teeth were divided into positive and negative groups of three each. Root canals were filled with gutta-percha and AH26 (groups 1a, 2a), Dorifill (groups 1b, 2b) and Apexit (groups 1c, 2c) using lateral condensation technique. The apical third of the roots were placed in Pelikan ink for one week. Linear dye penetration was recorded using a stereomicroscope and a digital caliper. Data were compared with analysis of variance (ANOVA). RESULTS: Observed leakage in groups which were filled with Apexit sealer was significantly different (P<0.002). There was no significant difference among groups which were filled with Dorifill and AH26. CONCLUSION: Calcium hydroxide did not influence the apical sealing ability of AH26 and Dorifill, while it did improve the apical sealing ability of Apexit sealer.