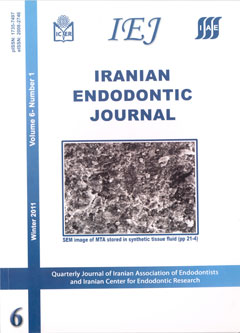 Introduction: The aim of this study was to examine and compare the apical sealing ability of AH26, AH plus and AH plus Jet using a fluid filtration model. Materials and Methods: 70 single-rooted teeth were dissected from the Cement-enamel junction. Canals were prepared with protaper rotary system and manual K files and irrigated with 5.25% Naocl and 17% EDTA. Ten teeth were assigned as control group and divided into 5 positive and 5 negative controls. Remaining specimens were divided into 3 groups of 20 samples and filled with gutta-percha points by lateral condensation technique. Each sample group was filled with either AH26, AH plus or AH Plus Jet. Micro leakage was assessed in the 2nd and 30th days by the mobility of air bubble in a capillary glass tube connected to the root. Results: No statistically significant difference was found in the apical micro leakage of the 3 studied sealers at any observation period. However, in the 2nd and 30th day, AH plus Jet had the least micro leakage values compared to AH plus and AH 26 (P>0.05). AH plus presented the highest micro leakage rate (P>0.05). Conclusion: Under the conditions of this study, all three studied sealers provided satisfactory seal in the mentioned period. Considering low microleakage rate of AH plus jet and its simplicity of use, the application of this sealer is recommended in endodontic therapy.