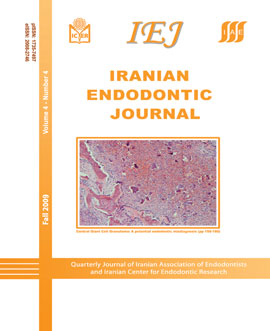 INTRODUCTION: Preparation techniques and instruments produce and push debris out of canals. This can induce inflammation within the periapical area. Therefore, instrumentation that causes less extrusion of debris is more desirable. The purpose of this in vitro study was to evaluate the quantity of debris extruded from the apical foramen during root canal preparation by using one hand, and two rotary instrumentation techniques. MATERIALS AND METHODS: Three different groups each with 12 mesiobuccal roots of human maxillary first molar were instrumented using either step-back technique with hand instruments, FlexMaster or Mtwo rotary system. Debris extruded from the apical foramen during canal preparation was collected. The mean dry weights of debris were compared using one-way ANOVA. RESULTS: Step-back group had a significantly greater mean weight of debris compared to the other two groups (P<0.05). Mtwo group had the lowest mean weight of debris, though it was not significantly different from FlexMaster group. CONCLUSION: According to this study, the engine driven techniques were associated with less apical debris extrusion. [Iranian Endodontic Journal 2009;4(4):135-8]