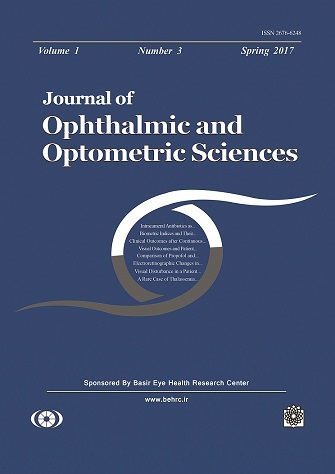 Intracameral Antibiotics as Prophylaxis in Cataract Surgery; a Mini-Review of Literature

Purpose: To conduct a mini-review of intracameral antibiotics usage as prophylaxis for post cataract surgery endophthalmitis.

Materials and Methods: We conducted a brief search of English literature regarding the recent developments in use of various intracameral antibiotics as anaphylaxis for post cataract surgery endophthalmitis.

Conclusion: Based on the latest findings it seems that more surgeons should set aside their doubts and use intracameral antibiotics as routine prophylaxis to reduce the rate of post cataract surgery endophthalmitis.

Biometric Indices and Their Relation with Age, Sex and Ethnicity

Objective: The aim of the present study was to evaluate the association of biometric indices with age, gender and ethnicity.

Conclusion: There was correlation between axial length, depth of the anterior chamber, vitreous chamber depth, lens thickness and mean k with age of the participants. Male subjects and specific ethnicities such as Arab patients tend to have higher axial length values.

Conclusion: Unilateral implantation of trifocal intraocular lens can be considered as a safe and viable option in presbyopic patients with unilateral cataract.

Purpose: Blindness is a catastrophic complication of surgeries performed in prone position which occurs mainly due to hemodynamic alterations and the relevant effects on optic nerve perfusion. In this study, we compared the effects of Propofol and Isoflurane on intraocular pressure among patients undergoing lumbar disk surgery.

Patients and Methods: In this randomized clinical trial, 60 patients who were candidates for lumbar disk surgery were randomly assigned into two groups: Propofol and Isoflurane groups. Intraocular Pressure was measured before and after induction of anesthesia in supine position, immediately after prone positioning of the patient and at the end of operation in prone position and also after turning the patients back to supine position. Mean arterial pressure, systolic and diastolic blood pressure and heart rates were also assessed.

Result: The baseline Mean Intraocular Pressure among awake patients in supine position in Isoflurane and Propofol groups were 15.8 ± 3.1 and 18.2 ± 5.4 mmHg respectively. At the end of operation intraocular pressure in prone position in these two groups of patients changed to 18 ± 5.8 and 17.2 ± 4.9 mmHg respectively (P = 0.024) indicating a statistically significant difference in change. According to mixed analysis, mean arterial pressure, systolic blood pressure, diastolic blood pressure, end tidal Co2 and heart rate did not show statistically significant difference between the two groups (P < 0.05).

Purpose: Multiple Sclerosis (MS) is a disease of nervous system which is accompanied by degeneration of visual pathway in certain cases. Magnetic Resonance Imaging (MRI) and Visual Evoked Potentials (VEP) are among the diagnostic techniques in detecting this disease. The aim of the present study was to evaluate the possible electroretinography (ERG) changes among these patients.
Patients and Methods: Thirty eyes of the patients with definite diagnosis of multiple sclerosis and delay in latency of visual evoked potential P100 peak entered the present prospective case control study as the case group. Latency and amplitude of ERG b-wave peak were measured in each eye. The result was compared with normal eyes thirty from age and sex marched individuals to evaluate the possible differences between the two groups.
Results: There was no statistically significant difference regarding the demographic data (age, UCVA) between the case and control groups. The b-wave latency did show a statistically significant difference between patients with MS and normal controls (P < 0.001). The ERG b-wave amplitude did not show statistically significant difference between patients with MS and the control group.
Conclusion: From the result of the present study it seems that the latency of b-wave in flash ERG might be used as an indicator to evaluate the retinal dysfunction in MS patients with abnormal VEP pattern.

Amiodarone is an antiarrhythmic medication used to treat a number of irregular heartbeats. Known ocular side effects of amiodarone include visual loss, swelling of the optic disc without visual deterioration and abnormal blue color vision. After discontinuation of amiodarone either a visual improvement or a permeant deterioration may result. Here we report a rare case of visual disturbance in a patient with a history of amiodarone treatment complaining from seeing colored rings around the lights after refractive surgery. After the discontinuation of amiodarone treatment the patient complains subsided.

A Rare Case of Thalassemia and Angioid Streaks

Here we describe a rare case of thalassemia and angioid streaks. Our patient was a woman who had been referred to our center due to reduction in vision over the past few years. She had a history of thalassemia major and related therapeutic interventions. The right eye sight was - 2/10 and the left eye sight was - 1/10. In her fundus view diffuse lesions were observed in both eyes. The patient was diagnosed as a case of angioid streak.