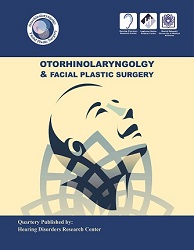 Septum Perforation in a Patient with Asymptomatic Systemic Lupus Erythematosus

Background: Systemic lupus erythematosus (SLE) is an autoimmune disease in which organs and cells are damaged by autoantibodies and immune complexes.

This disease often affects the body organs, one of which is the vascular system that manifests itself as vasculitis. Rarely, this vasculitis can cause perforation and epistaxis in the nasal septum. Most people who present this manifestation in lupus are people who have a known lupus case and develop septal perforation over time.

Case Presentation: In this article, a patient with epistaxis and septal perforation was referred and, finally, she was diagnosed with lupus.

Conclusion: This study shows that other than granulomatous and eosinophilic angiitis (Wegner & Churg-Strauss), systemic lupus erythematous should be in mind in diagnosis of septal perforation.

Background: Coexistence of optic neuritis (ON) and sinus disorder, particularly the concurrent presentation of both diseases, is a rare and unique condition. In this report, we describe a case of optic neuritis, which was accompanied by posterior ethmoid sinusitis.

Case Presentation: Presented with right-sided acute progressive loss of vision in a 61-year-old female due to the direct spread of infection from ethmoid sinus to the optic nerve through dehiscent optic canal.

Conclusions: A combination of medical therapy, prior to surgery, with broad spectrum antibiotics and corticosteroids together with right-sided ethmoidectomy and sphenoidectomy  led to a complete recovery of vision. She was successfully treated and at follow up of first month, she presented the normal vision acuity.

Background: Otitis media with effusion (OME) is one of the most common causes of hearing impairment in children and if not treated, can result in many complications. It seems that gastroesophageal reflux disease (GERD) plays an important role in OME.

Aim: to determine the improvement rate of otitis media with effusion in children under gastroesophageal reflux therapy.

Methods: The study was conducted as a retrospective study. Medical records of forty children with OME were reviewed. Some patients were treated with antibiotic and anti-reflux. The others were managed only with antibiotic. All patients were treated for 2 weeks. Two weeks after treatment complement, the response rates of patients were determined by clinical examination and tympanometry. Type A, C, and B tympanometry were interpreted as a good, moderate, and no response respectively. Pre-and post-treatment conditions were compared.

Conclusion: Anti-reflux therapy should be considered as an essential component of medical management in the children with OME.

Background: Anthropometric measures are important research goals especially because of racial differences and also variation in measurement techniques. In this study, head circumference in neonates weighing less than 2500 grams in Emam-Hosein hospital in 2018 was assessed.

Aim: The aim of this study was to Measuring Head Circumference in Neonates Weighing Less Than 2500 Grams.

Methods: In this cross-sectional study, 200 neonates weighing less than 2500 grams in Emam-Hosein hospital in 2018 were enrolled. The head circumference in neonates was determined and also was compared according to gestational age, birth weight, and sex.

Conclusion: Totally, it may be concluded that head circumference is normal only in ¼ of neonates weighing less than 2500 grams and it is not an optimal goal for growth pattern monitoring.

Methods: In this study, a photogrammetric analysis was performed on 120 female rhinoplasty applicants, aged 18-30 in Shiraz, Iran. Recorded parameters are nasal height and width, nasolabial and nasofrontal angle. Nasal indices were calculated according to heights and widths of noses. Also, facial asymmetry and nose hump checked for every patient.

Results: Measurements showed that the average nasal index was 67.15 ± 4.72. Thus, the nose of rhinoplasty applicants was the leptorrhine type. Furthermore, the average nasofrontal and nasolabial angles were 145.22° ± 9.93°and 94.47° ± 14.25°. Among all applicants, 35 percent have an asymmetric nose and 31 percent have a nose hump.

Conclusion:  An accurate facial analysis of rhinoplasty applicants was performed in this study, and the resultant facial profiles can be used in nose surgery planning and in further ethnic research.

Decompression of Facial Nerve after Temporal Bone Fracture: about 20 Cases

Aim: In this study, our goal was to record the facial profile of rhinoplasty applicants in Shiraz.

Results: Recovery rate was correlated to the delay of surgery. 83.3% of patients who underwent decompression surgery within the first 2 weeks after trauma had an excellent therapeutic outcome (HB grading I-II) and the difference was statistically significant (p=0.000).

Conclusion: Facial nerve paralysis surgical management after bone fracture is controversial. The decision must be taken according to the type of paralysis and the radiological electrophysiological and evolutionary data.

Background: The prevalence of mental disorders and injuries among cosmetic surgery applicants is higher than normal people.

Aim: The aim of the present study was to predict the tendency towards rhinoplasty based on obsessive compulsive disorder and body image.

Conclusion: Most people who refer to cosmetic surgery clinics have obsessive-compulsive tendencies and negative body image, and, therefore, it is recommended that clients undergo psychological evaluation in these clinics before surgery.

Discussion: This study offers important quantitative information on journals working on the disease. Identifying most productive journals can help potential researchers collaborate with researchers from pioneering journals and contribute to top journals for making influential works on COVID-19 and consequent knowledge on the control and treatment of the disease.