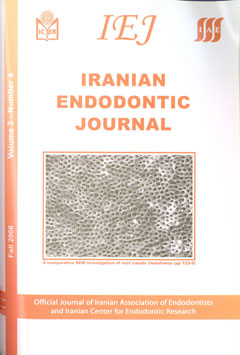 INTRODUCTION: The purpose of this in vitro study was to investigate the influence of 5.25% sodium hypochlorite (NaOCl) and 0.12% chlorhexidine gluconate (CHX) use separately and combined as endodontic irrigants on the apical sealing ability of two endodontic sealers. MATERIALS AND METHODS: Eighty-six extracted maxillary central incisor teeth were used. The teeth were decoronated at the CEJ, access cavities were prepared, root canals were instrumented up to a master apical file size #40, irrigated with either 0.12% CHX alone, 5.25% NaOCl alone, 5.25% NaOCl and 0.12% CHX combined, or saline and dried using paper points. Obturation was accomplished by lateral condensation technique using one of two endodontic sealers AH26 or Apexit. Apical leakage was measured using dye penetration method and data were analyzed by one way ANOVA and Tukey's HSD test. RESULTS: The results showed significant differences between NaOCl+CHX/AH26 group and both CHX/AH26 and saline/AH26 groups (P<0.05). There was also a significant difference between saline/AH26 and other irrigant/AH26 groups (P<0.001) also there was statistically significant differences between saline/Apexit group and other irrigant/Apexit groups (P<0.001). The mean leakage of CHX/AH26 and CHX/Apexit was statistically different as well as for NaOCl/AH26 and NaOCl/Apexit (P<0.05). CONCLUSION: Under the conditions of this in vitro study, combination of NaOCl/CHX can significantly increase apical sealing ability of AH26 sealer.