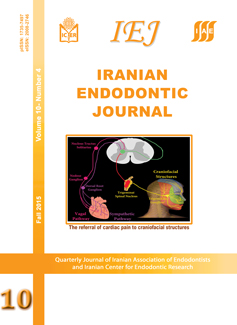 Effects of Reciproc, Mtwo and ProTaper Instruments on Formation of Root Fracture

Introduction: The aim of this study was to compare the formation of dentinal crack and craze lines in the root dentin during root canal preparation with three different NiTi endodontic systems, naming Reciproc (RCP), ProTaper Universal (PTU) and Mtwo. Methods and Materials: One hundred extracted mandibular premolars with single canals were selected and decoronated. The teeth were randomly divided into four groups of 25 each (n=25). In groups 1, 2 and 3 the teeth were prepared using Mtwo, PTU and RCP, respectively. While in group 4 (control group) the samples were left unprepared. After preparation, all specimens were sectioned perpendicular to the long axis of root at 3, 5 and 9-mm distances from the apex. The sections were then individually observed under 12× magnification using stereomicroscope. The data was analyzed using the chi-square and Fisher’s exact tests. The level of significance was set at 0.05. Results: No cracks were observed in the control group. All engine-driven systems caused dentinal cracks. Mtwo and PTU caused cracks significantly more than RCP (P<0.05). There was no significant difference between RCP and control group (P>0.05). Conclusion: All three engine-driven systems created dentinal defects. Reciproc caused less cracks than Mtwo and ProTaper Universal.