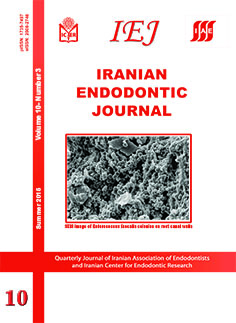 Introduction: Apical debris extrusion (DE) subsequent to root canal instrumentation, is one of the most important causes of endodontic flare-ups. The aim of this study was to compare the amount of DE after root canal instrumentation using nickel-titanium (NiTi) hand files with step-back manual technique or installed on reciprocating handpiece. Methods and Materials: This study was conducted on mesiobuccal (MB) roots of extracted maxillary first molars (n=20) and roots of mandibular premolars (n=20) that were randomly divided into two groups (n=20) according to the armamentarium used for canal preparation (air-driven reciprocating handpiece or hand instrumentation). In each group, the MB and premolar roots were prepared with the main apical sizes of 35 and 40, respectively. The extruded debris were collected and weighed. Finally, the mean dry weights were compared using ANOVA and t-test, and Tukey’s Multiple Comparisons Procedures were used to determine the significant differences in amounts of DE. The level of significance was set at 0.05. Results: Regardless of the type of teeth, the mean values of DE, were significantly lower in the handpiece group (P<0.0001). In addition, significantly lower amounts of DE was observed in premolars in similar group (P<0.001). However, this difference was not significant in MB roots of molars (P=0.20). Conclusion: Root canal preparation with reciprocating handpiece can lead to significantly lower debris extrusion than the manual step-back technique. In handpiece-prepared canals, the amount of extruded debris was significantly lower in premolar teeth.