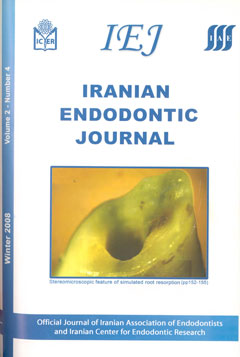 INTRODUCTION: The aim of this study was to compare a clearing technique with conventional radiography in studying certain features of the root canal system in single root premolars. A secondary aim was to assess inter examiner agreement for these features using radiographs. MATERIALS AND METHODS: Fifty-eight recently extracted single rooted premolars were included in this study. Two standard periapical radiographs were taken from buccolingual and 20° direction. The specimens were then decoronated, demineralized in 10% hydrochloric acid for 24 hours and then were cleared using methylsalicylate. The cleared teeth were examined using a magnifier (x10) and data relating to number of roots, canals, apical foramina and their positions were collected. The radiographs were examined by two independent trained endodontists using an X-ray viewer and the magnifying lens for same studied features using the clearing technique. RESULTS: The kappa values for the agreement between the clearing technique and two examiners for the number of canals in standard radiographs were κ = 0.07, κ = 0.26 and in angulated radiographs were κ =0.84, κ =0.39 and κ =0.31; for number of apical foramen were κ = 0.66, κ = 0.50, and κ = 0.19 and for detection the number of roots were %84 and %92 for examiner 1 and %92 and %88 for examiner 2. CONCLUSION: In general, the kappa values were low to moderate for all comparisons. It is concluded that agreement between either radiographic examiners and clearing technique were poor to moderate indicating the limited value of radiographs alone at the time of studying certain aspects of the root canal system.