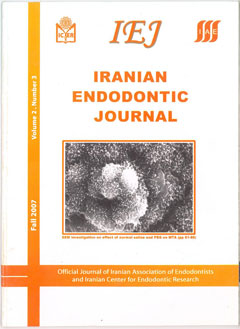 INTRODUCTION: The antibacterial effects of calcium hydroxide (CH), mineral trioxide aggregate (MTA), and calcium enriched mixture (CEM) cement against various spp. of microorganisms were assessed in-vitro using agar diffusion test. MATERIALS AND METHODS: A base layer of Petri plates was made using Muller-Hinton agar. Four cavities were made in agar and filled with freshly mixed materials after 24 h. The microorganisms were seeded by pour plate. The plates were pre-incubated for 2 h at room temperature followed by incubation at 37˚C for 24 h. The inhibition zones diameters were measured by an independent observer. RESULTS: The highest mean diameters of growth inhibition zones were founded around CH and CEM cement. According to One-way ANOVA there was a significant difference among test groups (p<0.001); Post Hoc test revealed no significant difference between the mean zones diameter of CH and CEM cement. However, there was significant difference among CH and CEM cement in comparison with MTA group (p<0.001). CONCLUSION: It appears that CEM cement is a potent antibacterial agent like CH.