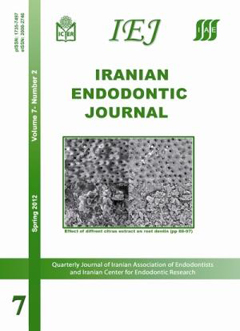 A Scientometric Study of PubMed-Indexed Endodontic Articles: A Comparison between Iran and Other Regional Countries

Introduction: Based on Iran’s 20-year prospective national vision document, Iran may be seen as the most developed country in science and technology in the region by 2025. In this report, bibliometric indicators are used to compare the research productivity in endodontics between Iran and 28 selected Asian countries. Materials and Methods: Medical Subject Headings keyword-searching of PubMed up to 2012 was conducted to compare the scientific publications in Iran and neighboring countries (Middle East, Middle Asia, Caucasus and EMRO countries). Highest 5 PubMed-indexed endodontic journals were also searched to retrieve the number of published articles of the top five countries. Data were extracted, tabulated and compared to identify the ranks as well as trends. Results: The results confirm that there are many differences in scientific endodontic publications between the studied countries; Iran ranked second in endodontic research productivity compared to Turkey in 2011. However, Iran attained first place in 2010 as well as the most positive publication trend in PubMed-indexed endodontic journals. Conclusion: Although Iran was in second rank in the region last year, the positive trend in published endodontic research papers is considered a sign of future success in acquiring Iran’s vision.