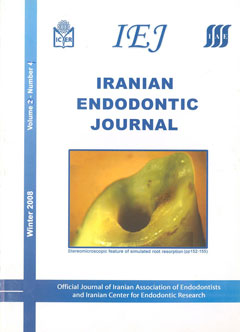 INTRODUCTION: A variety of mesial and distal projections have been suggested for separating the canals in a multi-canaled root. But there is no general agreement on the best angulation for each tooth. The purpose of this study was to evaluate the X-ray horizontal angle for separating the canals of four-canal first mandibular molars. MATERIALS AND METHODS: Forty four-canaled mandibular molars were selected. After preparation of coronal access cavities, files were inserted into the root canals and the specimens were radiographed at 10, 15, 20, 25 degrees mesial and distal horizontal angulations. Apices and canals were evaluated. Chi-square test was used for statistical analysis. RESULTS: Although 10° and 15° mesial and distal angulations were best for the most obvious apices manifestation (P<0.001), it was found that 20° mesial angulation is significantly better than the other cone angulations (P<0.001) for separating the root canals. CONCLUSION: 20° mesial angulation improved detection of both the canals and canal terminus visibility.