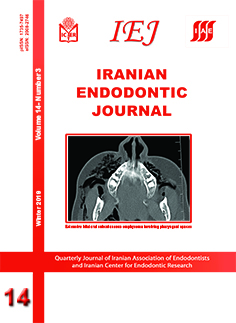 Introduction: The purpose of this study was to compare the high resolution cone-beam computed tomography (CBCT) and standard mode CBCT diagnostic accuracy in internal root resorption with different sites and sizes. Methods and Materials: Eighty single rooted human teeth with visible pulps in periapical radiography were split mesiodistally along the coronal plane. Internal resorption like lesions were created in three areas (cervical, middle and apical) in labial wall of the canals in different diameters. High resolution CBCT (CBCT-H) and standard mode CBCT (CBCT-C) were taken from each tooth. Two observers examined the high resolution CBCT and standard mode CBCT to evaluate the presence of resorption cavities. The data were statistically analyzed and degree of agreement was calculated using Cohen’s kappa (k) values. Data were analyzed by SPSS 20 software and sensitivity, specificity and positive and negative predictive value for both methods were calculated. Data were analyzed using the Mac-Nemar and chi-square tests. Result: The positive predictive value and negative predictive value in CBCT-H was higher than that of CBCT-C, all of which indicates that the CBCT-H diagnostic test is more sensitive and more accurate than CBCT-C. Kappa statistics showed that there is a strong and complete agreement between the CBCT high resolution and reality (kappa: 0.72) and in the Standard CBCT method, a moderate agreement has been obtained with reality (Kappa: 0.45). Conclusion: According to our in vitro study CBCT high resolution has a higher diagnostic accuracy than conventional CBCT.