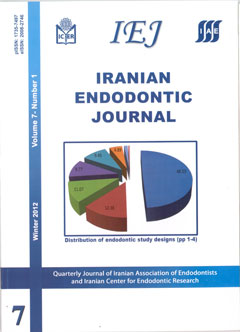 Effect of calcium hydroxide and chlorhexidine medicaments on the apical seal

Materials and Methods: Seventy extracted, single-rooted maxillary anterior teeth were divided into the three experimental groups (n=20). All root canals were instrumented with step-back technique and divided into three groups. Group 1 had root canal dressing with calcium hydroxide; group 2 had root canal dressing with 1% chlorhexidine gel and group 3, did not receive a dressing. The roots were incubated in 100% humidity at 37°C for 7 days. After removing the dressings, all canals of the experimental groups were obturated using a cold lateral condensation technique. The root surfaces of all specimens were coated with two layers of nail varnish, except for the 2 mm surrounding the apical foramen. Apical sealing ability was assessed by dye leakage method and the specimens were examined under a stereo-microscope. Dye penetrations were measured and analyzed using ANOVA and post-hoc Tukey test.