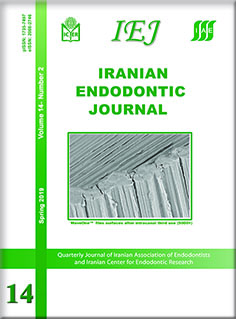 Introduction: This study evaluated the occurrence of morphological changes on the surface of the instruments WaveOne™ and Reciproc® when used in the preparation of simulated curved canals with and without glide path (generated with the Pathfile™ system), after the first, second, and third uses. Materials and methods: Sixty-four resin blocks, which simulated curved root canals, were used and instrumented with a variety of instruments, grouped according to manufacturer and conditions of simulated canal preparation. Simulated canals were instrumented with WaveOne™ (GW1 group) and Reciproc® (GR1 group) according to manufacturers’ recommendations, respectively. In contrast, GW2 and GR2 groups’ simulated canals were submitted for construction of glide path with the PathFile™ system before the use of WaveOne™ and Reciproc® instruments, respectively. Each instrument was used three times; after each use, each instrument was analyzed by using scanning electron microscopy (cervical, middle, and apical thirds of the instrument) in order to characterize the occurrence of changes (fracture, twist, and crack). Data were described using means and standard deviations. We used generalized linear models to compare differences between factors (region, manufacturer, glide path, and number of uses). SPSS-15 software was used, with a significance level of 5%.Results: Without glide path, WaveOne™ instruments tended to fracture more frequently (P=0.003), twist more frequently (P=0.05), and crack more frequently (P=0.022), with increasing use, with statistically significant differences. With glide path, both WaveOne™ and Reciproc® instruments cracked less frequently (P=0.001); Reciproc® instruments did not exhibit superficial changes, such as fractures and/or twists. Conclusion: In this in vitro study Reciproc® instruments exhibited superior performance, compared with WaveOne™ instruments, particularly when glide path with the PathFile™ system was used; both instruments may be used, safely, three times to prepare curved canals.