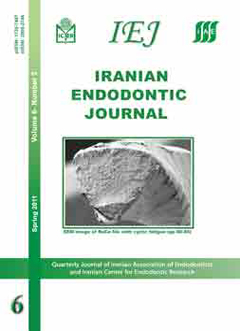 The effect of blood on apical microleakage of Epiphany and AH26: An in vitro study

MATERIALS & METHODS: In this experimental study, 50 decoronated central incisors and canine teeth were prepared by RaCe rotary system and randomly divided into 4 groups (n=10). Groups A1 and A2 were obturated by Epiphany/Resilon and AH26/Gutta-percha, respectively. The obturations were performed with a single cone technique after drying root canals. In B1 and B2 groups, the test groups, 0.02cc citrated human blood was injected into dried root canals and they were obturated in the same manner. Ten specimens were served as positive and negative controls (n=5).The apical leakage was measured by means of a computerized fluid filtration method after 1 day and 3 weeks. The data was analyzed by One-Sample Kolmogorov-Smirnov, Independent Sample t-test and univariate analysis. Statistical significances were preset at α=0.05.

RESULTS: There was no significant difference in apical microleakage of the two sealers after 1 day and 3 weeks in dry and blood environment (P>0.05). Sealer and environment had no interaction (P>0.05).

CONCLUSION: Blood contamination has no significant effect on the apical microleakage of Epiphny and AH26.
Keywords: