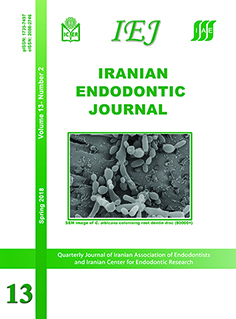 The Antifungal Effect of Propolis Endodontic Irrigant with Three Other Irrigation Solutions in Presence and Absence of Smear Layer: An In Vitro Study

Introduction: the aim of this in vitro study was to compare the antifungal effect of propolis as an endodontic irrigant agent with a mixture of doxycycline, citric acid, and a detergent (MTAD), 2% chlorhexidine (CHX) and 3% sodium hypochlorite (NaOCl) against Candida albicans in presence and absence of smear layer. Methods and Materials: Extracted teeth with single canals (n=104) were prepared and randomly distributed into four experimental groups; 30% propolis, MTAD, 2% CHX and 3% NaOCl. Each group had two subgroups; with and without smear layer. The antifungal effectiveness was evaluated. The Kruskal-Wallis and Mann-Whitney tests were used to compare the overall effectiveness of different treatments at significance level of 0.05. Results: Propolis, CHX and NaOCl had similar levels of effectiveness to each other against C. albicans, and these levels were not affected by the presence or absence of the smear layer. Each irrigant was significantly more effective than MTAD or saline solution. MTAD was less effective in the presence of the smear layer than in its absence. Conclusions: Propolis irrigation can produce root canals that are free of C. albicans, even in the presence of the smear layer.