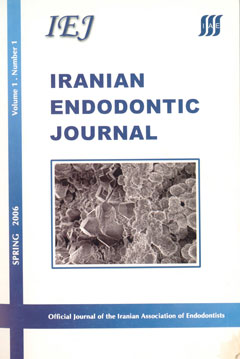 INTRODUCTION: Acute pain and swelling following endodontic treatment are challenges for patients and dentists. According to previous studies, the incidence of flare-ups increases after endodontic treatment of teeth with necrotic pulp. Calcium hydroxide is currently used as a multipotential medicament in root canal therapy. The aim of this study was to evaluate the incidence and severity of flare-ups after treatment of pulpless teeth using calcium hydroxide as an intracanal dressing. MATERIALS AND METHODS: Sixty patients with single root necrotic teeth participated in this study. These patients were randomly divided into three groups of twenty. The patients in group A were treated in a single-visit approach, in group B with a two-visit approach without any intracanal dressing and in group C with a two-visit approach using calcium hydroxide as an intracanal dressing for one week. All of the patients were followed for 72 h after each treatment session. The information about the incidence and severity of pain and swelling was recorded in tables, using a modified visual analogue scale for pain severity measurement and a scale with four degree for measuring the severity of swelling. The data were analyzed by chi-square test and GENMODE procedure. RESULTS: The incidence of pain showed to be the highest in group B and the lowest in group C. These differences were statistically significant. There was no significant difference in the severity of pain after the first visit between groups B and C; however, the severity of pain was significantly lower in group C after the second visit. The incidence of pain in group C was significantly lower than that in group A, but there was no significant difference in the severity of pain between these two groups. There was no significant difference in the incidence and severity of swelling among the three groups. CONCLUSION: It is concluded that calcium hydroxide as an intracanal dressing could be effective to decrease the postoperative pain and swelling. Therefore it is recommended to use calcium hydroxide as an interappointment dressing in necrotic teeth.