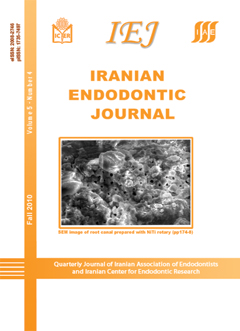 INTRODUCTION: The aim of the present study was to compare hand stainless steel K-files and Nickel-Titanium Profile 0.04 taper 29 series rotary instruments for their efficiency, procedural errors and time consumed in preparation of root canal system. MATERIALS AND METHODS: A total of 46 maxillary and mandibular first premolars extracted for orthodontic purposes were collected (two contralateral teeth from each individual). The samples were divided into two groups of 34 canals each. Teeth in the first group were prepared with stainless steel hand K-files while the second groups were prepared with profile 0.04 taper series 29 rotary files. Preparation period was recorded for both groups. Impression material was introduced into the prepared canals so that the replica of prepared canals was achieved. These were assessed under stereomicroscope to assess the efficiency in preparing canals in respect to canal smoothness, ability of impression material to flow and quality of taper. Statistical analyses were performed using t-test, Chi-square and Fishers exact tests. RESULTS: Results showed significantly shorter preparation time for Profile than K-file. 8.8% of the canals prepared with K-files showed canal blockage, while all canals prepared with Profile remained patent. Alterations in working length working distance appeared in 23.5% of canals prepared with K-file and 11.7% in canals prepared with Profile. Failed instruments in K-files were significantly higher, mostly deformation (P<0.001). Profiles failed instruments were in the form of fracture and no deformation was detected. Both systems showed unsatisfactory walls smoothness and flow. CONCLUSION: Within the limitation of this study it was concluded that Profile 0.04 taper series 29 rotary systems prepare canals more rapidly, and have lower incidences of fracture and blockages, and only limited loss of working length. Canal preparation with K-file was time consuming and showed higher incidence of deformed instruments; overall, rotary instruments seem to offer greater advantages.