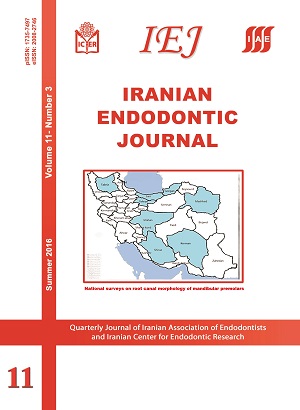 Introduction: The aim of this in vitro study was to compare the efficacy of ProTaper retreatment (ProTaper R) and Mtwo retreatment (Mtwo R) files in removing gutta-percha and GuttaFlow from endodontically treated straight root canals. Methods and Materials: The root canals of 60 human mandibular single-rooted premolars were prepared and randomly divided into two groups (n=30). In groups A and B the root canals were obturated using lateral condensation of gutta-percha plus AH 26 and GuttaFlow, respectively. The canal orifices were temporarily sealed and the roots were incubated for 3 months at 37ºC and 100% humidity. Primary cone-beam computed tomography (CBCT) images were taken after incubation period. The specimens in each group were randomly divided into two subgroups (n=15). ProTaper R files (D1, D2, and D3) were used in groups A1 and B1 while Mtwo R files (25/0.05 and 15/0.05) were used in groups A2 and B2. The time required to extirpate the root filling was also recorded. After retreatment, another CBCT scan was taken at the same position. The volume of remaining filling materials inside the canals was calculated before and after retreatment. The data was analyzed using the two-way ANOVA and independent t-test. Results: The remaining filling materials in the canals treated with ProTaper were less than Mtwo. The remaining volume of GuttaFlow was less than gutta-percha regardless of the system applied. Mtwo R files removed root fillings faster than ProTaper R. Conclusion: ProTaper R removed filling material more efficiently compared to Mtwo R which required less time to remove root filling material.