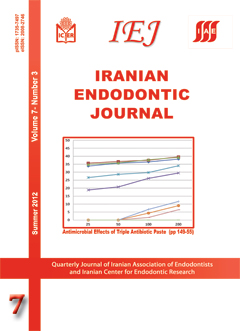 Introduction: In cases of limited access to the surgical site, an alternative approach is to obturate the canal prior to surgery. Endodontic surgery is subsequently performed by root-end resection without retro-cavity preparation. This in vitro study was designed to compare the sealing ability of resected roots filled with either mineral trioxide aggregate (MTA) or calcium enriched mixture (CEM) cement.

Conclusion: Within the limitations of this dye leakage study, we can conclude that if limited access prohibits retrofill placement, MTA or CEM cement can be used to fill the canal prior to root-end resection; as they have similar sealing ability. However, further laboratory and clinical studies are required to evaluate this alternative method.
Keywords: