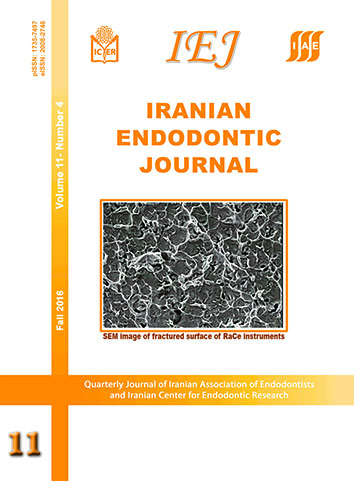 Introduction: The aim of this randomized-controlled clinical trial was to assess the effect of intraligamentary (PDL) injection of dexamethasone on onset and severity of post-treatment pain in patients with symptomatic irreversible pulpitis. Methods and Materials: A total number of 60 volunteers were included according to the inclusion criteria and were assigned to three groups (n=20). After administration of local anesthesia and before treatment, group 1 (control) PDL injection was done with syringe containing empty cartridge, while in groups 2 and 3 the PDL injection was done with 0.2 mL of 2% lidocaine or dexamethasone (8 mg/2 mL), respectively. Immediately after endodontic treatment patients were requested to mark their level of pain on a visual analogue scale (VAS) during the next 48 h (on 6, 12, 24 and 48-h intervals). They were also asked to mention whether analgesics were taken and its dosage. Considering the 0-170 markings on the VAS ruler, the level of pain was scored as follows: score 0 (mild pain; 0-56), score 1 (moderate pain; 57-113) and score 3 (severe pain; 114-170). The data were analyzed using the Kruskal-Wallis and the Chi-square tests and the level of significance was set at 0.05. Results: After 6 and 12 h, group 1 and group 3 had the highest and lowest pain values, respectively (P<0.01 and P<0.001 for 6 and 12 h, respectively). However, after 24 and 48 h the difference in the pain was not significant between groups 1 and 2 (P<0.6) but group 3 had lower pain levels (P<0.01 and P<0.8 for 24 and 48 h, respectively). Conclusion: Pretreatment PDL injection of dexamethasone can significantly reduce the post-treatment endodontic pain in patients with symptomatic irreversible pulpitis.