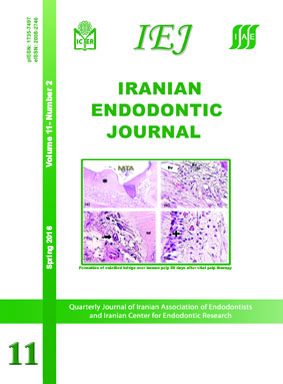 Introduction: The aim of the present study was to compare the efficacy of 2% lidocaine to 4% articaine in buccal infiltration of maxillary first molars with irreversible pulpitis. Moreover, the effect of root length on success of anesthesia irrespective of the type of anesthetic agent was assessed. Methods and Materials: Fifty patients suffering from painful maxillary first molars with irreversible pulpitis received an infiltration injection of either 4% articaine with 1:100000 epinephrine or 2% lidocaine with 1:80000 epinephrine. Each patient recorded their pain score in response to a cold test on a Heft-Parker visual analogue scale (VAS) before commencing the treatment, 5 min following injection, during access preparation, after pulp exposure and during root canal instrumentation. No or mild pain at any stage was considered a success. Data were analyzed using the multivariate logistic regression analysis, chi-square and t tests. Results: Finally, 47 out of 50 patients were eligible to be included in this study. The anesthetic success rates in the lidocaine and articaine groups were 56.52% and 66.67%, respectively and the difference was not significant (P=0.474). Irrespective of the anesthetic agent, the length of the palatal root (Odds Ratio=0.24, P=0.007) had an adverse effect on anesthetic success. There was an association between longer palatal root length and anesthetic failure. Conclusion: No significant difference was found between 2% lidocaine and 4% articaine in terms of anesthetic success in maxillary first molars with irreversible pulpitis. The length of the palatal root had a significant negative influence on anesthetic success.