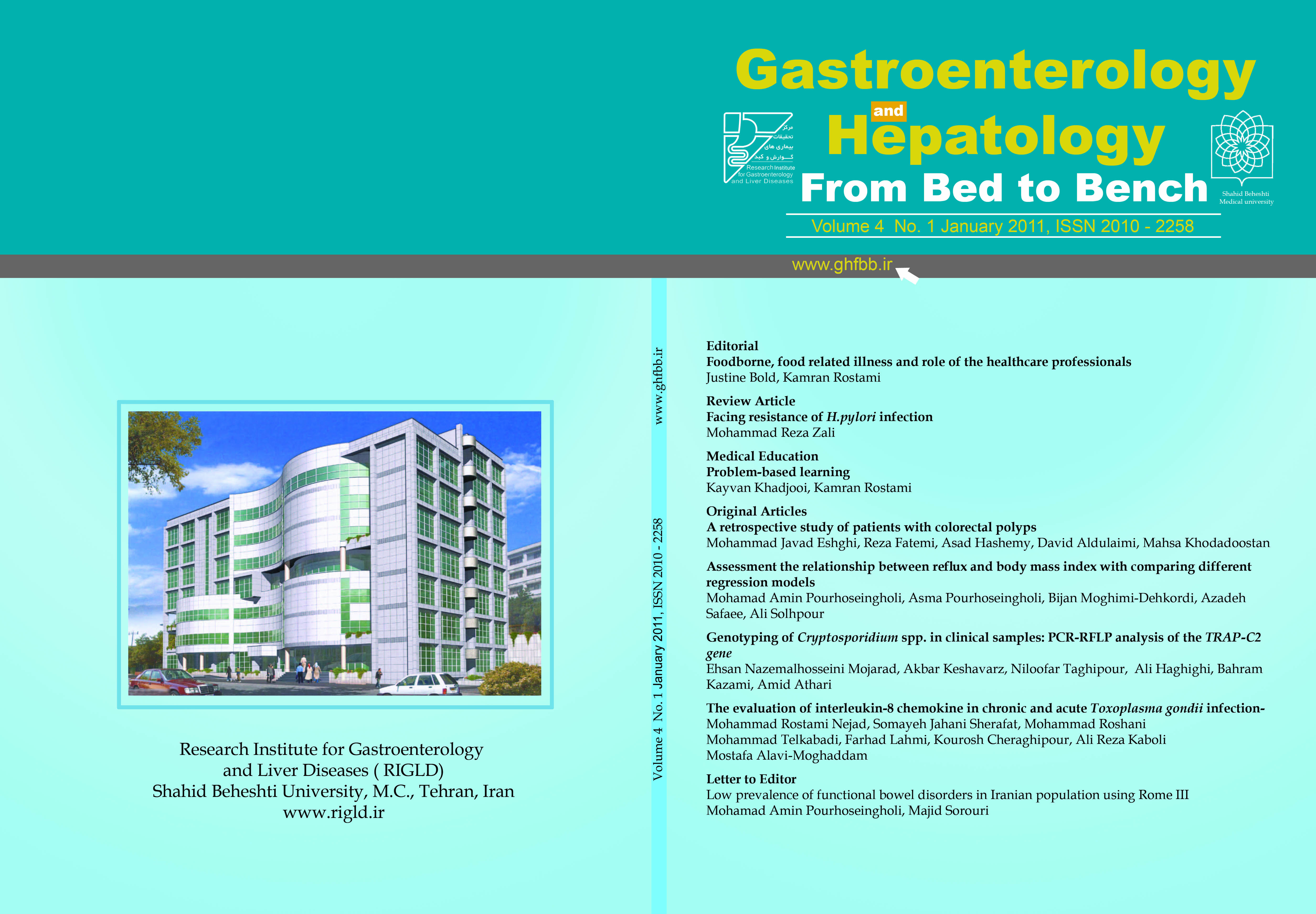 Foodborne, food related illness and role of the healthcare professionals

A retrospective study of patients with colorectal polyps

Aim: The aim of this study was to report the anatomical location and histologic type of colorectal polyps in a large series of Iranian patients that attended for colonoscopy.

Patients and methods: In this retrospective study, the medical records of patients who had attended for colonoscopy were reviewed. Patient demographics and colonoscopy findings were reviewed. The anatomical location, macroscopic appearance and histological assessment of any polyps were recorded.

Conclusion: A significant number of adenomas and carcinomas lie proximal to the splenic flexure and occur in the absence of distal lesions. These lesions would be missed if the distal colon was examined and the entire colon examined only if a distal lesion was identified.

Aim: The aim of this study was to determine whether there is relation between body mass index and symptoms of gastro-esophageal reflux disease in our community using Logit, Probit and Complementary log-log models.

Patients and methods: We carried out a population-based study to estimate the strength of the association between body mass and reflux symptoms. During interview, participants completed a valid Gastro-esophageal Reflux Questionnaire. The coefficients calculated by logistic, Probit and Complementary log-log regression with multivariate adjustments for covariates.

Results: Reflux symptoms at least once a week over the last three months were reported by 522 (9.1%) of the 5733 interviewees. There were no evidence in all models to address the significant relation between Reflux and BMI and all models derived in same efficacy.

Conclusion: Our results showed that the choice of the link function in this analysis is not the most important issue but still a user could also look forward to some other link functions like Probit and Complementary log-log.

Genotyping of Cryptosporidium spp. in clinical samples: PCR-RFLP analysis of the TRAP-C2 gene

Aim: The aim of the present study was to determine the species and genotypes of Cryptosporidium spp. among children with diarrhea by PCR- RFLP using the TRAP-C2 gene.

Background: Cryptosporidium is a globally distributed protozoan parasite and one of the most common causes of infection and diarrhea in humans.

Patients and methods: Four hundred and sixty nine stool samples were collected from children less than 12 years with diarrhea who had been referred to Pediatrics Medical Centers in Gazvin provinces. The presence of Cryptosporidium oocysts was determined by Ziehl-Neelsen acid fast staining, then, genomic DNA was extracted from positive samples and nested PCR-RFLP was performed to amplify the TRAP-C2 gene.

Results: The overall prevalence of Cryptosporidium infection in children was 2.5 %. Results of nested PCR amplification showed that of 12 positive children samples, 10 (83.3%) were belonged to C. parvum, followed by C. hominis in 1 (8.3%) and mixed infection in 1 isolate (8.3%).

Aim: We investigated whether the level of IL8 was different in patients with chronic and acute Toxoplasma gondii infection during the pregnancy compared with control group.

Results: The level of IL8 in group I was within normal range similar to control group. However, the level of IL8 was increased in those pregnant patients with positive IgM T.gondii serology.

Conclusion: The serum levels of pro-inflammatory cytokines such as IL8 seem to be increased in patients with serological evidence of acute T.gondii infection.

Helicobacter pylori is an important human pathogen and a gram-negative, spiral shaped and microaerophilic bacteria with persistence colonization in gastric mucosa, causes gastroduodenal inflammation and destruction, resulting in diseases such as duodenal ulcer disease, gastric ulcer disease. When H.pylori discovered by Warren and Marshall, effective therapy developed for this infection and resulted in remarkable change in management of PUD and dyspepsia. Nowadays, the increasing prevalence of drug resistance has complicated successful therapy, considering more attention for appropriate therapy. Ideally, therapy should be based on pretreatment drug susceptibility testing, and empiric use of eradication therapies should assume the presence of antimicrobial drug resistance and use increased doses for 14 days.