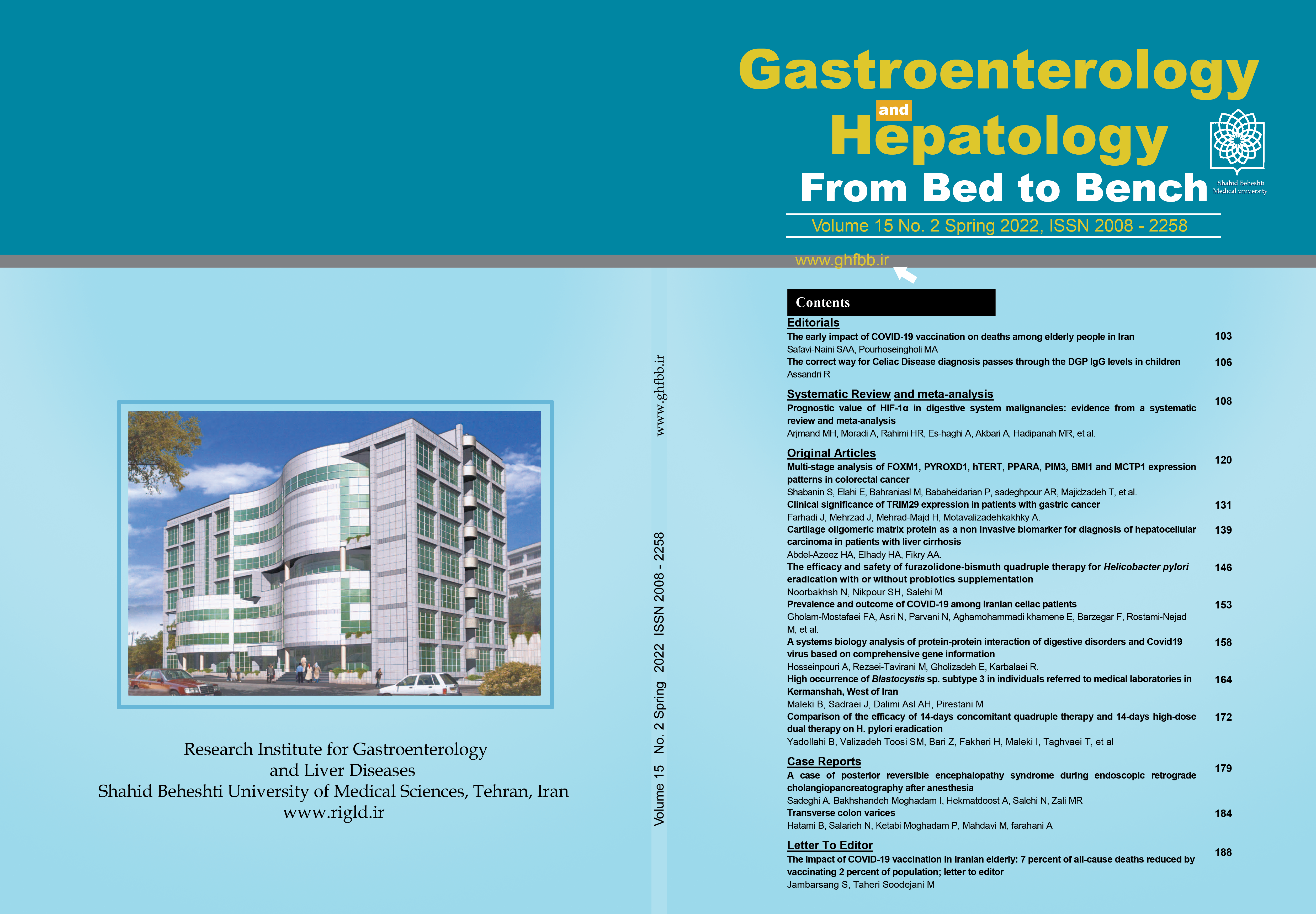 Prognostic value of HIF-1α in digestive system malignancies: Evidence from a systematic review and meta-analysis

Background/aims: Numerous studies have demonstrated that hypoxia-inducible factor-1α (HIF-1α) is abnormally expressed in various solid tumors. However, the clinicopathological features and prognostic value of HIF-1α expression in patients with digestive system malignancies remain controversial. Accordingly, this meta-analysis was aimed to evaluate the association of HIF-1α expression with clinicopathological features and overall survival (OS) of patients with digestive system malignancies.

Methods: A literature search in PubMed, Web of Science, and Scopus databases was performed to identify all relevant studies published in English until 15 October 2020. Pooled effect was calculated to evaluate the association between HIF-1α expression and clinicopathological features and overall survival in cancer patients. Pooled odds ratios (ORs) or hazard ratios (HRs) with 95% confidence interval (CI) were calculated using either fixed- or random-effects model.

Conclusions: This meta-data suggest that HIF-1α expression might serve as an independent prognostic marker and a promising therapeutic target in patients with digestive system malignancies.

Aim: To explore biomarkers with a tumor stage-dependent expression pattern in patients with colorectal cancer (CRC).

Background: The fourth most common cancer in the world is colorectal cancer (CRC). A variation in the gene expression rate is a common change in cancers initiation and the accumulation of these variation changes the behavior of normal cells and turns them into cancer cells.

Methods: Real-time RT-PCR was used to investigate the expression patterns of the FOXM1, PYROXD1, hTERT, BMI, PPARA, PIM3 and MCTP1 genes in 54 patients with stage I to IV CRC and their relation with clinicopathological features of CRC were analyzed.  Results: FOXM1, hTERT and MCTP1 genes are overexpressed in CRC tumor tissues when compared to normal adjacent tissues in all the stages.

Conclusion: Our study indicates that expression profiles of these genes either individually or together can be applied as potential biomarkers for prognosis of CRC.

Clinical significance of TRIM29 expression in patients with gastric cancer

Aim: The present study aimed to evaluate the expression profile, prognostic value, and possible correlation of TRIM29 with β-catenin, Cyclin D, and Bcl2 in Iranian patients with GC.

Background: Tripartite Motif Containing 29 (TRIM29) has been reported to function as an oncogene or a tumor suppressor depending on the tumor type. This contextual function has created a controversial situation that needs to be fully delineated in various cancers. Although few studies have reported an elevated TRIM29 expression in gastric cancer (GC), its clinicopathological and prognostic values as well as possible molecular mechanisms are yet to be re-evaluated in different populations.

Conclusion: Overexpression of TRIM29 is associated with poor prognosis in patients with GC and is probably mediated through β-catenin/Cyclin D/Bcl2 pathway and can be considered as a potential independent prognostic marker.

Hala A Abdel-Azeez, Hoda A Elhady, Abeer A Fikry

Aim: The current study purposed to evaluate serum COMP (Cartilage oligomeric matrix protein) as a diagnostic marker for HCC in patients with cirrhosis and to correlate it with other parameters of disease progression.

Background: COMP is known to promote fibrosis in various tissues. Emerging evidence shows that COMP plays critical roles in tumor development. It can serve as a fibrosis and cancer biomarkers.

Methods: The study included 24 subjects who serve as the healthy control, 24 cirrhotic patients without HCC, and 24 HCC patients with cirrhosis. All participants were subjected to liver function tests, AFP, calculation of fibrotic indices (APRI and FIB-4), and serum COMP by ELISA.

Conclusion: COMP might act as a promising non-invasive biomarker for HCC either alone or in combination with AFP. It was correlated with the degree of fibrosis and associated with advanced cancer staging.

Aim: In this clinical trial we use furazolidone-bismuth quadruple therapy with or without probiotics for H.pylori eradication.

Background: Increasing rates of eradication failure in H.pylori infection mainly due to antibiotic resistance has led to search for alternative regimens such as using novel antibiotics and/or using probiotic supplementation as conjunctive to the standard eradication regimens.

Methods: This double blind clinical trial was performed in gastrointestinal clinic of Loghman Hakim University Hospital, Tehran, Iran. Patients with a positive pathology test for H.pylori were enrolled to the study and received a 14 day course of furazolidone 100 mg q.i.d, bismuth 240 mg b.i.d, amoxicillin 1000 mg b.i.d, pantoprazole 40 mg b.i.d plus either probiotic (Familact) b.i.d or placebo b.i.d. Adverse effects and adherence to therapy were evaluated at the end of the treatment course. Eradication was established by H.pylori fecal antigen test.

Conclusion: According to our results, adding probiotic to furazolidone-bismuth quadruple therapy did no increase the eradication rate significantly. However, adverse effects particularly abdominal pain was lower in the probiotic group when compared with placebo.

Prevalence and outcome of COVID-19 among Iranian celiac patients

Aim: This study aimed to evaluate the prevalence and outcome of COVID-19 among Iranian celiac disease patients.

Background: Patients with celiac disease (CD) might be at greater risk for opportunistic viral infections. Coronavirus disease-2019 (COVID-19) is a new coronavirus (SARS-CoV-2) cause of respiratory disorder which spread around the world at the end of 2019. The question is does COVID-19 infection increase the risk of severe outcome and/or a higher mortality in treated celiac disease?.

Results A total of 455 celiac disease patients were included in this study. The prevalence of Covid-19 infection among celiac disease patients was 2.4%. Infection among women (72.7%) was higher than the men, and only one overweight man who smoked was hospitalized. Among COVID-19 infected celiac disease patients, the most common symptoms were myalgia 90.9% (10/11), fever, body trembling, headache, shortness of breath, loss of smell and taste, and anorexia (72.7%). Treatments for COVID-19, included antibiotics (90.9%), pain analgesics (54.5%), antihistamines (27.3%), antivirals (9.1%) and hydroxychloroquine (9.1%).

Conclusion: This study shows that treated celiac disease is not a risk factor for severity or higher mortality in patients infected with COVID-19. Women, however, might need extra-protection to prevent COVID-19 infection.

Aim: Analysis of networks of digestive disorder and their relationship with Covid-19 based on systems biology methods, evaluation similarity, and usefulness of networks to give a new treatment approach.

Background: Digestive disorders are typically complex diseases associated with high treatment costs. They are related to the immune system and inflammation. With the outbreak of Covid-19, this disease was shown to have signs like diarrhea. Some signs of Covid-19 are similar to those of digestive disorders, like IBD and diarrhea. Both of them are accompanied by inflammation and induce disorders in the digestive system.

Methods: DisGeNET and STRING databases were sources of disease genes and constructing networks and were used to construct the network of digestive diseases and Covid-19. Three plugins of Cytoscape software, namely ClusterONE, ClueGO, and CluePedia, were used to analyze cluster networks and enrichment pathways. To describe the interaction of proteins, information from KEGG pathway and Reactome was used.

Results According to the results, IBD, gastritis, and diarrhea have common pathways. The CXCL8, IL-6, IL-1β, TNF-α, TLR4, and MBL2 molecules were identified as inflammatory molecules in all networks.

Conclusion: It seems that detecting genes and pathways can be useful in applying new approaches for treating these diseases.

High occurrence of Blastocystis subtype 3 in individuals referred to medical laboratories in Kermanshah, West of Iran

Aim: The current study investigated the prevalence and genotypes of Blastocystis sp. in individuals who referred to medical laboratories in Kermanshah, Iran.

Background: Blastocystis sp. is a common intestinal protozoan found in humans and a wide range of animals, and it is involved in the development of gastrointestinal disorders.

Results Microscopic examination showed that 86 out of 950 samples (9.05%) were infected with Blastocystis sp. Subsequently, 33 of 86 positive samples were cultured and molecularly confirmed by conventional PCR, indicating six subtypes (ST1-ST6). Of note, ST3 (45.0%) was the predominant subtype, followed by ST1 (15.15%) and ST5 (12%).

Conclusion: Based on the current findings, ST3 was the most frequent subtype among all positive samples. Having a better understanding of Blastocystis sp. subtype distribution and risk factors would lead to improved preventive measures.

Aim: We compared the efficacy of two different regimens for H. pylori eradication in areas with high antibiotic resistance.

Background: Helicobacter pylori (H. pylori) is a gram-negative bacillus that has a strong association with chronic gastritis and peptic ulcer disease. Different regimens with varying degrees of effectiveness have been used for H. pylori eradication.

Conclusion: Fourteen days concomitant quadruple therapy can be considered as a relatively acceptable regimen for H. pylori eradication in areas with high clarithromycin and metronidazole resistance. It seems that high-dose dual therapy could be a promising alternative regimen in these areas.

Posterior reversible encephalopathy syndrome (PRES) is a neurological disorder that occurs following cerebral vasogenic edema. It has diverse clinical presentations from headache and vomiting to seizure and mental status alteration. Herein, we report a 54-year-old woman with no prior disease who developed PRES in the parieto-occipital lobes and brain stem after a second attempt endoscopic retrograde cholangiopancreatography (ERCP). To our knowledge, no case of PRES during ERCP has been reported to date. This case reminds us of unusual complications that are likely to occur after ERCP. It is believed that blood pressure fluctuations and anesthetic medications, fentanyl in particular, were the main precipitating factors causing the syndrome in the current case. Even if there is no specific treatment for this condition, a diagnosis is critical to start supportive treatment.

Portal hypertension associated with liver cirrhosis usually leads to gastroesophageal varices; however, ectopic varices secondary to liver cirrhosis are not common, especially colonic varices which occur with a low frequency.

We are going to discuss the case of a 75-year-old man with liver (HBV) cirrhosis who was admitted to the hospital with rectorrhagia. Colonoscopy revealed evidence of acute bleeding in tortuous colonic varices. The band ligation performed during the colonoscopy had failed to control the bleeding.

The patient was referred to Taleghani Hospital in Tehran, and rectorrhagia was subsequently successfully controlled by BRTO technique (balloon-occluded retrograded transvenous obliteration).

The impact of COVID-19 Vaccination in Iranian elderly: 7 percent of all-cause deaths reduced by vaccinating 2 percent of population; letter to editor

We read with interest the article recently published in Gastroenterology and Hepatology from Bed to Bench entitled “The impact of COVID-19 Vaccination in Iranian elderly: 7 percent of all-cause deaths reduced by vaccinating 2 percent of population”. The aim of the paper was to predict the impact of vaccination of old population on all-cause deaths based on time series model.